Tanisha C. Ford is a rising academic star and Black feminist public scholar who works at the intersection of African American history and material culture, specifically style and fashion. The author, critic and associate professor at the University of Delaware has two books on Black beauty and fashion that came out this year: Kwame Braithwaite: Black is Beautiful and Dressed in Dreams: A Black Girl’s Love Letter to the Power of Fashion. Her first book, published in 2015, is the award-winning Liberated Threads: Black Women, Style, and the Global Politics of Soul.

Ford talked to Ms. about feminist fashion, the power of centering Black women and girls and the moment her research reached Rihanna.

How does it feel to have a pop star like Rihanna cite your research when discussing the cultural influences behind her own newly launched fashion line Fenty Maison?

I was thrilled when I saw that! It was funny because I had just worked on Kwame Brathwaite: Black is Beautiful, and he’s this photographer that most people have never heard of, but his family has been working really diligently to make his archive public. Because of that, he’s gained traction in the fine arts world and also in the Black entertainment world. I was excited that Rihanna knew who he was. When I saw her initial post, I was like: “Oh wow, Rihanna is mentioning Kwame Brathwaite!” And then a friend said: “You too!” Me too? What is she talking about?

She then tagged me in her Instagram stories, and I could see that Rihanna mentioned me! I was just astounded. I think I had to literally stop production for the next two hours. I just couldn’t even wrap my mind around it. It just felt like this huge blessing.

Of course! Your research now has a wide reach with such recognition.

I’ve always had a feeling of fighting back against people seeing my work as frivolous or something that’s lightweight or not as deep or important as Slavery Studies, for example. But I feel like this was the work that I was purposed to do—and to hear Rihanna recognize my work publicly, that to me was just affirmation.

Do you see yourself as a fashion scholar?

I think that in some ways it’s very fun to be thought of as a fashion scholar because I think that people who do African American Studies are really starting to stumble upon fashion as a way to think about serious political issues in ways that Africanists and other Area Studies scholars have long been doing, linking fashion to economies and geopolitics. But sometimes in the U.S.-based fields, if you say you’re a fashion scholar, people don’t take you seriously, or they think that it’s frivolous—and that can be an uphill battle, to explain what you do, even though it’s also something that seems cool and interesting to people and they’re intrigued by it.

I also like to remind people that I am trained as a twentieth-century U.S. historian and as a scholar of African Diaspora History. Fashion is just one piece of what I do.

Could you say more about your new book, Dressed in Dreams?

This book is a deep dive into Black America’s closet. I look at iconic garments, hair styles, accessories, and I tell a Black-girl-centered history of those items and those hairstyles. And I do that because, far too often, Black women and girls have to prove to the fashion industry or the beauty industry that we’ve been wearing these styles.

Long before a Kardashian was doing it, anonymous Black girls in every hood across the U.S. have been doing that thing. I wanted to write a love letter to those Black women, to those Black girls, to those non-binary femmes—who’ve really shaped so much of American fashion culture, but haven’t gotten the credit, and who don’t see themselves in the fashion magazines and, even more than the fashion magazines, don’t see themselves in books about fashion.

I wanted to write a book that centered us, that we could pick from a bookshelf and say: I feel seen. I feel understood. This is my history.

How does this book differ from Liberated Threads?

When I wrote Liberated Threads, I saw myself as a civil rights, Black power movement historian using fashion as a lens to help us understand the everyday contours of that movement. But with Dressed in Dreams, I could write something that was deeply personal, that could use elements of creative non-fiction. I was excited to write in a different voice. I could also have something that focused on the human experience of getting dressed in a way that the archive I was using for Liberated Threads didn’t allow for or didn’t account for.

What archives did you work with for Dressed in Dreams?

I first wrote this piece on Dajerria Becton, the teenager who was assaulted by a police officer in a suburb of Dallas, Texas at a pool party, and I started thinking about how our clothes archive all of our experiences—how those experiences are embedded in an emotionality that is then interwoven with the garment itself.

That’s why our clothes mean so much to us. That’s why they have this special emotional value, even if you only paid $2.00 for it. You can care about it so much because you’ve lived in that garment, and part of your life memories are connected to that garment.

What do you say to feminists whose impulse is to dismiss fashion or see it as a form of oppression? I’m thinking of those who wanted to get rid of the high heels and the bras. There are those who offer a critique of patriarchy and urge us to resist the trappings of femininity, which is what fashion and style is supposed to represent. Then there are the anti-capitalists who see it as just another commercialized project of overconsumption, or the environmentalists who have problems with fur, for example.

I remember when Beyoncé was critiqued for wearing fur in some of her videos for her self-titled album and how that supposedly contradicted her feminist identity. What do you say to any of those kinds of political arguments?

Feminism is expansive, and there are all these different strains of thought within it, so I think that my feminism is one that makes space for a conversation about fashion that doesn’t just take it as something that’s frivolous, but sees the potential for fashion to be liberatory, and also sees the long history in which feminists of all colors, classes and so forth have used style and garments as central to their movement, as central to their activism—creating uniforms, if you will, that help make their political message very clear.

I like how each chapter in Dressed in Dreams highlights a particular style, sometimes representing an entire era.

One thing that was challenging about that was having to write myself at different ages. When I write on the Jheri curl—I’m 10 years old in that chapter, and trying to channel my 10-year-old self, and not just write back into history through the lens of my grown-woman self and remembering that era as an adult. I really tried to step back into that moment and experience it again the way I did as a 10-year-old Black girl. Trying to do that at every age, that was a particular challenge, but one of the reasons why I did that was because I wanted the book to be accessible to high school kids. I wanted it to feel like something that they could see themselves in immediately and understand that this was a book that was speaking to them too. I wanted it to have that kind of cross-generational feel.

The book is not just about the personal but also the collective. Could you say more about the communal aspect of your book?

I wanted to show how Black girls’ clothing, and the decisions we make around our bodies, are a form of Black girl world-building, where we are doing something that’s deeply about ourselves, and our own form of self-expression, but we’re doing it in community, and we’re using our bodies to imagine new possibilities. I wanted to really give voice to that, and show Black girls that yeah, I see you—and I see what you do despite the fact that the world tells you that you’re affective, that you’re too much, that your body is hypersexual, that your name is too ghetto, that your long curvy nails make you look hood, that you’re not educated.

We have our own politics. We have our own way of seeing the world and engaging with the world and pushing back against the normative in ways that people need to see—because they love it when they see it on a Kardashian, or Ariana Grande, or somebody like that, but when they see it on a Black girl, it’s considered an affront. It’s considered too much. I wanted to be able to talk about that in a very productive way that also reflects a very Black girl spirit that creates that kind of culture.

What do you think of the conversations about fashion and cultural appropriation?

My love letter offers a different model—where Black girls get to be at the center of the making, the center of the industry, and can create a story that is made visible without some white designer going into our neighborhood and taking our style, divorcing it from our entire community, giving it a different name, and putting a white model in it to walk the runway and then expecting us to buy into that world that they’ve now created for us to imagine ourselves in!

That’s why I think the Rihanna moment is so important: because it shows how the Black-girl-fashion-culture model can work in the industry. Instead of Rihanna using the same model that white American and white European designers use, she said, I want to start with a story that’s very much connected to my own Caribbean heritage, and I’m going to use Black women models, Grandassa models. I’m going to have Black models in a contemporary moment, and I’m going to create a moment around us that very unapologetically centers Black experiences, that centers an African Diasporic tradition of style and dress, that creates a genealogy that shows how our fashions have evolved in our communities over time.

That’s the model I want to see. 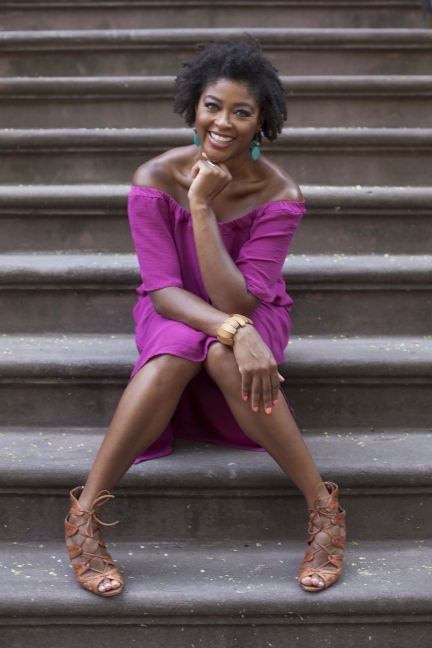