Women are not just victims of conflict. They are leaders, and often unsung heroes. Seeking Peace, a podcast produced by Georgetown’s Institute for Women, Peace & Security, brings you their stories—and in an exclusive partner series with Ms., you get a glimpse into their conversations with GIWPS Executive Director and former U.S. Ambassador for Global Women’s Issues Melanne Verveer.

It’s been 20 years since “The Troubles” between Catholic nationalists and Protestant unionists in Northern Ireland ended. Monica McWilliams was one of only two women who helped negotiate an end to that conflict.

On a recent episode of “Seeking Peace,” she reveals how women fought for seats at the negotiating table—and what they had to endure to make their voices heard. Listen to the full episode to hear Monica describe her earliest memories of what was known locally as “The Troubles,” and hear from Yemeni women who are coming together today to push for peace.

How did you get involved with efforts to end the conflict in Northern Ireland?

That’s a good question because it was asked of myself and the other woman [in the peace talks.] Where did you come from? As if we’d fallen out of the sky. We had to remind those who were posing this question that we’d been around for 30 years.

We’d stood at too many graves. I myself had a boyfriend murdered in 1974. And I remember the shock and the pain and the trauma. And by this stage there were thousands dead. And we said this has to stop. We knew nothing else. Violence became the norm, and it was peace that was strange.

And so the extraordinary moment happened of ceasefires in 1994 and that opened up a window. And we, as ordinary women, fell into extraordinary times.

When the peace talks were declared after the ceasefires, we asked the question: Where are the women? Because we knew that, as activists, we had existed—and, had we not been around, the war would have been much worse. It was neighbor on neighbor, it was community against community, but it was the women who were the peace builders from the ground up.

By 1996, the peace talks were finally set. There were going to be elections to determine which political parties would participate in the talks. How did the women come together to form a political party—the Northern Ireland Women’s Coalition—and ultimately win seats at the peace table?

It was a very spontaneous decision. We actually had not initially decided to stand for election—we decided that we would put it up to the other parties to see if they would put women in their delegations.

They didn’t take that issue seriously, and so two of us sat down one night and we said: is it possible that this [forming a political party] could happen? The next day, we started sending out messages, putting press statements and advertisements into the newspapers, asking women—would they come to a meeting to discuss the possibility of us coming together as a coalition. And it was the most unbelievable meeting. Hundreds of women turned up.

And there were different voices. Some said you’ll have blood on your hands if you go for election, that’s not what women are known for. The opposite voices in the room said, it’s time to wave goodbye to dinosaurs. Let’s do it. And those voices won out and that night we agreed that we would form a coalition. Women started nominating themselves, and by the end of the evening, we had 70 candidates running in the election.

You then had your slogan: Wave goodbye to the dinosaurs.

The slogan “wave goodbye to dinosaurs” was very creative, but it wasn’t the most popular when we put up the posters with this on it. The reaction from the leaders of the parties was vitriolic. They said, how dare you call us a dinosaur. And the women said, is your name on that poster? And they said, no, it’s not. Well, why are you self-identifying as a dinosaur? And then we would walk away laughing.

The women’s coalition won two seats at the peace table. What was it like in those negotiations? How were the women treated?

We felt like outsiders in the first year. We received a great deal of insults. “Go home to the kitchen and go and breed for the country, have babies, which is what you’re supposed to do.” And on and on it went. The public were shocked that these men could behave so badly towards women who had been elected to these seats.

You also played a mediating or a refereeing role, between some of the male representatives in the process and those who were excluded.

What we did was really important in negotiations. You need to know what the others around the table are thinking. We were talking to Sinn Fein, who had been locked out during the first year because they hadn’t reinstated their ceasefire. We were back-channeling, which is what good negotiators and facilitators and mediators ought to be doing, and it’s now accepted that it is something that you should do in a peace process. But to [the others at the table], it was absolutely shocking.

“You women are in love with murderers, and you’re just Sinn Fein in skirts”—again and again, these labels came firing across the table. But we kept up that back-channeling and convinced that party, Sinn Fein, that they should reinstate a cease fire and get into the room, because their ghost was rattling around in the room and we were spending time talking about them and they weren’t even in the room.

President Clinton invited the Northern Irish political parties to come to the White House on Saint Patrick’s Day. The male representatives of the various parties held a separate meetings with the president in the Oval Office. What happened with the women’s coalition?

Well, they forgot about us, and someone realized that they had messed up, and I think they approached you, Melanne, in your role as First Lady’s Chief of Staff, at that stage, and asked permission if we could speak to the First Lady.

Somehow the First Lady understood exactly what she was talking about. And she asked: What can I do for you? And I said, well, are you going to speak tonight? And she said, well, yes, I’ll be introducing the president. And I said, it would be good if the man in the room who comes from Northern Ireland can hear your voice.

She stood up that night, and there was a hush in the room, and she spoke about the role of women in conflict and the role of women in Northern Ireland and Ireland, and the need to have women involved in these processes—and the men’s eyes just opened up, and some of their mouths fell open, because they hadn’t expected this, and I could feel their eyes on me and Pearl as if we had somehow bribed the First Lady. And they came up afterwards and said: How did that happen? And I said, well, while you men were with the President of the United States, we were with the First Lady, and we just had a chat, as women always do all over the world, and this is the outcome. And boy did they look disappointed.

That meeting with the First Lady changed everything. It gave me a great deal of confidence, and when we came back, the attitude, most definitely, towards us did change.

How did all of this change you?

I hope I’m a lot wiser from having met so many different people who think differently, but also have shown me that there are different ways of looking at a problem. And I hope I have more patience than I once did, because you need a great deal of it if you’re going to be in these processes, but I also have to say that I’m a better person for having been part of it.

We need more role models. If a young woman doesn’t see a woman in that role, she cannot begin to expect that she can do that job and she can. But once she sees a woman doing it, she realizes: I could do that too.

About Georgetown Institute for Women, Peace and Security 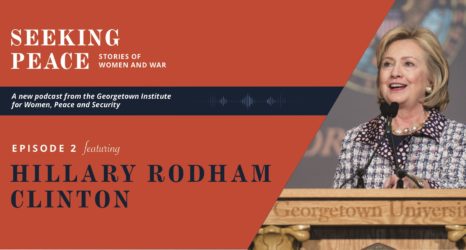 Georgetown Institute for Women, Peace and Security and Melanne Verveer 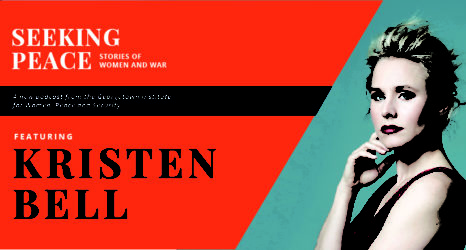 Seeking Peace: Kristen Bell Opens Up About Her New Off-Screen Role as an Advocate for Women Worldwide

Georgetown Institute for Women, Peace and Security and Melanne Verveer