February 18, 2020 marks the day celebrated novelist Toni Morrison would have turned 89 if she were still among the living. Sadly, she departed from us last summer, and this Black History Month, different campuses are engaged in commemorative events for the Nobel Laureate—from Oberlin College’s day-long remembrance to University at Albany’s special exhibit of Morrison’s time in Albany.

I am teaching her most acclaimed Pulitzer-Prize-winning novel Beloved, an epic tale of slavery and Black women’s violent claims to freedom. The central eponymous figure, a ghost in the flesh, is how I now envision Morrison and her legacy.

There was a time when Black feminist literary scholars struggled to extol the virtues of the writings of Living Black Women who were oftentimes viewed as inferior to the Dead White Men of the literary canon. Now that Morrison—and others who have gone before or after her, from Audre Lorde to Toni Cade Bambara to June Jordan to Michelle Cliff to Ntozake Shange to Paule Marshall—has joined that great pantheon of our beloved “dead” Black Women, I can only think of them as still “living,” as vibrant, haunting and fully embodied in the flesh as Beloved was for her formerly enslaved community.

I have taught three other Morrison novels throughout my teaching career. The first, Sula, was assigned to an English composition class when I was a doctoral student—and when I gave the mostly white students the creative assignment to “fill in the gaps” of the missing years when Sula had left her hometown, their stereotypical renderings of Black female sexuality left me shaking my head, and realizing why Morrison’s insistence on writing outside of a white gaze was so crucial to her imaginative writing. Sula was reduced to a Jezebel-type, but in the imaginations of both the author and her Black female audience, we knew Sula was more complicated than that. Still, this first-time attempt at teaching college students was an eye-opener on how to navigate the white gaze in the teaching of texts that refused to center that gaze.

I have had better success teaching Morrison’s novels in the women’s studies classroom. I had assigned students in a feminist theory class the task of creating a visual response to the complex novel Paradise and have kept one of my favorite pieces from that assignment—a clay sculpture of the character Seneca healing from trauma by drawing lines on a cellar floor instead of cutting into her own flesh. The student who created this work was drawn to the character because she too had been in recovery for self-cutting. I have taught The Bluest Eye in a women and media class, in which students were challenged to collect mass media images and categorize them as either undermining the self-esteem of Pecola Breedlove, a dark-skinned Black girl who longed for blue eyes, or potentially fostering self-love. These assignments fully engaged students as they personalized Morrison’s stories and developed empathy with fictional characters, an aspect of Morrison’s writing that is critical to her creative output in telling the stories of the most marginalized people and making us care about them. Long before #BlackLivesMatter, Morrison demonstrated the ethos of this philosophy through her writing.

To mark Morrison’s birthday today, I invited a few Black feminist scholars whose work I admire to share with me their own best practices, their favorite texts from Morrison and how they choose to teach it in the classroom.

Mentoring and the Teaching of Beloved

The morning word broke that Morrison had passed, I received a text from Simone, a former undergraduate advisee, that read: “I got the update and had to step away from my students. My heart is broken. You’re the only person I wanted to share this moment with.”

Of the former students I spoke with that day, Simone’s text cemented one of the most important aspects of Morrison’s legacy: how teaching Morrison’s novels invite opportunities for mentoring.

As a feminist rhetorician, I see in Beloved a charge to translate its mandates about power and healing. Statements like Schoolteacher’s retort that “definitions belong to the definers not the defined” require that students see and question how language can shape or remake an individual’s subjectivity. Landscapes like the clearing where Baby Suggs warns her listeners that in “yonder they do not love your flesh” charge students to understand how racial terror preserves a group’s need for safe spaces and affirmation. Paul D’s reminder to Sethe that she is her “own best thing,” underscores Morrison’s argument that Black women cannot neglect self-care in the wake of generational trauma.

To teach Beloved to young Black women like Simone is to commit to bearing witness as they discover how to see and manage their own reflection. It has meant reading multiple essay drafts as students position themselves around Morrison’s characters, or extending office hours so you can read a draft aloud and affirm a student’s ideas. It will always mean rejecting surface readings and getting comfortable with rigor. It is to sit in vulnerability and embrace on-going work.

Fortunately, as Simone’s text indicates, it is never time wasted.

Teaching Playing in the Dark

Before I decided to major in Comparative Literature, I was interested in being a biochemical engineer. The seduction of literary study was slow and surprising and, as with any romance, a rupture of all I thought I knew. When I teach, I confess that I am striving to educate the student I once was: an eager soul who does not yet know literature as uniquely powerful. For this reason, I love to teach Toni Morrison’s Playing in the Dark: Whiteness and the Literary Imagination.

Playing in the Dark results from her William E. Massey Sr. Lectures at Harvard and her course in American literature. Owing perhaps to the pedagogical beginnings from lecturing and discussion, the book is concise and patient in its instruction. Morrison argues persuasively that there exists an Africanist presence in American literature, one that shapes the fundament of Americanness itself. I tend to present Playing in the Dark in two ways: sometimes, I lecture on the ideas of the text as a frame for understanding how to read American literature. In advanced classes, I provide students with the book itself for more in depth study.

Given all of Morrison’s oeuvre, why would I teach her theoretical text, especially if my goal is to reach someone who is quite possibly intellectually aloof? Well. It matters how we tell stories, to whom, what about and why we believe them. The narratives we tell repeatedly, the narratives we champion—those shape our world-making both as restrictions and possibilities.

Morrison’s book stokes students to consider that the stories within American letters are shaped by a set of (mis)conceptions regarding Blackness. The corollary is that current narrative—whether in fiction, news media, social media, or family lore—is also operating by the same logic. To be honest, I am less concerned about whether they are convinced, since after reading Morrison’s work, you cannot unsee her point. What matters more is that, having discovered Morrison, students have learned how to read so much more than books.

One of my favorite Morrison texts to teach is her short story “Recitatif.” Morrison is so well known for her novels and essays, but “Recitatif” is too often overlooked, despite the fact that it is a gem of story and works really well in the classroom.

Part of my affinity for “Recitatif” lies in the story’s curious structure: it’s a tale of two women, one white and one Black, who meet in an orphanage and several times over the course of their lives.  Although their relationship is tenuous it is a significant touchstone for both of their very different lives. And while we learn a lot about mid to late twentieth century America through the events of their lives—such as the rise of rock and roll, affirmative action and school bussing—what is never really clear is which woman is white and which is Black.

Instead, Morrison peppers the story with racialized generalizations—about food, hygiene, work ethic and the like—that could apply to either race. Morrison’s purposeful obfuscation of race really invites readers to consider what we really know when we “know” someone’s race. This is particularly interesting in the classroom. I invite students to speak openly about racial stereotypes and how they often function as a type of social technology for us to make sense of the world. Often, students’ first reactions is to argue that one character has to be Black or, alternatively, white—because everyone knows that these people are really like this or that. The moment they uncover their own flawed logic is always a transformative one.

Teaching Race-ing Justice, En-Gendering Power: Essays on Anita Hill, Clarence Thomas, and the Construction of Social Reality, edited and with an introduction by Toni Morrison

Reading Toni Morrison’s work makes me feel brave. Teaching her work makes me feel strong. Similar emotions, to be sure—but when you are a Black female college professor teaching the race-based work of Morrison at a persistently white institution, the subtleties in the definition of the words do matter.

In 2017, two years after the Black Lives Matter movement began to spread across college campuses, I launched a Black Lives Matter Social Justice course to explore America’s racial history and the pivotal events that laid the foundation for this social movement. I chose with care the books and articles that I wanted to students to read, selecting both Keeanga Yamahtta-Taylor’s From #BlackLivesMatter to Black Liberation and Toni Morrison’s Race-ing, Justice, En-gendering Power to anchor the course.

Yamahtta-Taylor’s book was an obvious choice, as it was, at that time, the only book that explored the history of the Black Lives Matter Movement. Morrison’s book was more of a personal choice—a desire to have my students wrestle with a complicated text, a collection of essays that brilliantly analyzed how America’s racial and gender identity had been shaped and distorted by racism and sexism. I chose her book because I wanted them to be challenged. I wanted them to be uncomfortable. I wanted them to learn how to take single revelatory moments in America’s history and place them in a broader historical context.

When I first read this collection of essays, it kept me up at night, forcing me to think about who I was and who I wanted to be in this world. I thought about the power of the written word, and how Morrison used it to take America’s racial temperature and then explain to us what we were doing wrong and how we can make it right.

It is not an easy book to teach, but it is a necessary one. I knew that Morrison’s collection of essays would help my students to understand how America’s propensity and desire to bury racial and gender issues kept, and keeps, us from reckoning with them. Teaching this book as a Black woman in an environment where I sometimes feel that I have to fight for my voice to be heard makes me feel brave; watching my students struggle with the text and ultimately make sense out of it, makes me feel strong.

In both of these moments, I feel joy and gratitude for Morrison’s work and for her words. 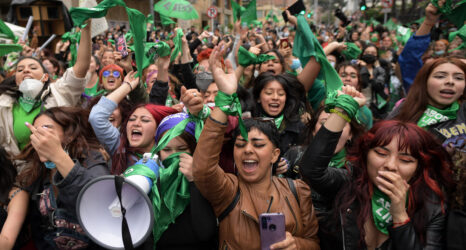