Race, Sex and Policing: Where Do We Go From Here? - Ms. Magazine
Skip to content

Discussions about policing rarely center women or members of the LGBTQ community.

On Monday, Feb. 8, the Center for Biotechnology and Global Health Policy at the University of California Irvine School of Law and the ACLU of Minnesota co-hosted the second of a four-part series—Advancing Women’s Equality: Confronting Barriers to Full Inclusion and Progress—examining how histories of race, sex, immigration and LGBTQ discrimination undermine women’s constitutional equality and status in the U.S.

The Feb. 8 program, “Race, Sex and Policing,” grappled with the historic and modern-day challenges involving women, policing and incarceration, and featured:

Watch the compelling one-hour conversation here, and read the recap below.

Policing is undeniably one of the most important issues we face in the United States—and as evidenced by the events of this year, 2020 and the entire history of policing in the U.S., the epidemic of police violence can no longer be ignored.

“There is a terrible history and socialization that has happened over decades and decades in this country,” Judge Glenda Hatchett told Ms., underscoring the importance of knowing the history of police violence. “Until we acknowledge it, we can’t fix it. … You can’t get to a place of getting better, until there’s a sincere acknowledgement that this is a chronic, critical, penetrating issue.”

Once aspect of this “chronic, critical, penetrating” issue is the glaring lack of consideration paid to the intersection of gender and policing: Discussions around policing rarely center women or members of the LGBTQ community.

“Cisgender women and transgender people are subjected to traumatizing policing interactions and policing that too often treats them as threats—rather than as people who deserve to be treated with dignity and kept safe,” said Nusrat Choudhury, Roger Pascal legal director of the ACLU of Illinois.

Any conversation around policing necessarily must include the roles of race, sex and gender. After all, women and LGBTQ folks are underrepresented in the police force and police leadership. (Women make up less than 13 percent of the police force, and while the exact number of LGBTQ officers is not tracked, multiple reports portray policing as a “homophobic” industry.)

But despite their underrepresentation on the force, women—especially Black women—and LGBTQ folks experience over-policing and disproportionate amounts of police violence.

“It’s paramilitary. Men in law enforcement benefit in the same way that men in society benefit from our social structure, which provides men, particularly white men, with entitlement, privilege, and power.”

“The level of heterogeneity in policing really creates a narrow lens through which policing is constructed,” Anne Li Kringen, associate professor of criminal justice at the University of New Haven, told Ms.

“Underlying any consideration about diversity, gender or racial, is a set of diverse perspectives, and this is really what is missing.”

Does Increasing the Number of Women Police Officers and Officers of Color Make a Difference?

More women in policing changes departments by “improving communication, developing greater rapport with communities, shifting the nature of police work from reactive to proactive, reducing the prevalence of use of force,” Kringen said, “but the broadening of perspective that comes with diversification is the largest single advantage that women bring to the field.”

So what can we do about this? Reform? Defund? Start from scratch?

“In this broad movement for racial justice, there is room for both reimagining the role of policing in our society while also engaging in immediate reform efforts to address the serious harm that marginalized communities, including people of color, women and transgender people, experience from policing on a daily basis,” said Choudhury.

The time for change and the broader and long term reimagining of policing as an institution is now, said Amy Fettig, executive director of The Sentencing Project—but she admitted it’s challenging. “Institutional reform is incredibly difficult, because what you have to do is change culture. And we’ve seen that in efforts around the country to change police departments, to change unconstitutional conditions in prisons and jails, something I did for almost 20 years.”

Fettig continued: “What we see over and over again, is court orders are put into place; they can be in place for 10, 20, 30 years … [but] once the court oversight went away, those institutions went back to exactly what they were before. That tells us that the fundamental cultures had not been changed; they were still there—they were just waiting to not be held accountable, to not have that outside oversight.”

One solution is to increase the number of women and people of color within police forces. This has manifested in campaigns like the 30×30 initiative—to reach 30 percent representation of policewomen in the U.S. by 2030—which is “designed to assist departments in increasing the number of women working as officers through a variety of mechanisms,” said Kringen.

These are important steps to be taking in the interim to begin to address overpolicing and police violence—but as Deirdre Fishel, director and producer of Women In Blue, expressed, “We need some major systemic changes, and it’s not like women, or any person of conscious, [are] going to be the sole solution.”

According to Fishel, “in terms of changing the system, I think you need to have a lot more numbers. And in order to get those numbers, I think it has to come from something external. Basically, these police departments have to be forced—because you talk to any chief about women, they’ll all tell you the same thing, ‘Yup, it’d be great if we had more women.’ But how do you how do you get them in? Then how do you retain them? That’s going take a lot of work.”

This was echoed by both Goodman and Fettig.

“Some people are just not going to want to change; they’re going to wait, they’re going to hope that you just go away,” said Goodman. “So you really have to find people who are willing to operate in a different way. And that may mean, completely changing the folks who populate those institutions, bringing in new ideas, new blood, and entirely new employees.”

Goodman agreed—incremental changes have not proven workable. “We do have to sort of blast things apart a little bit,” she said. “We have given chiefs and sheriffs enough time and they have failed. It’s time to go beyond them. And I think right now, it’s up to state and federal policymakers to make changes.”

She continued, “In a city like Minneapolis, which was my old police department … they need to do some foundational work, like redo the position descriptions, redo the value statements, and then tell every single person in that department, you need to reapply for your job.”

Goodman also said buy-in from community leaders is critical for any meaningful change and trust.

One thing is clear: Any solution must be responsive to the historical and modern race and sex discrimination permeating police departments across the U.S. and informed by the communities impacted most by policing.

Go in-depth on this conversation by tuning into Episode 1 of “On the Issues with Michele Goodwin”: Policing in America: A Tale of Race, Sex and Violence (with L. Song Richardson, Anne Li Kringen, Laura Goodman and Deirdre Fishel).

About Mariah A. Lindsay

Mariah A. Lindsay is an attorney and the senior executive policy fellow and coordinator of programs with the Center for Biotechnology and Global Health Policy at UCI Law. She is also a producer on the podcast "On the Issues with Michele Goodwin." 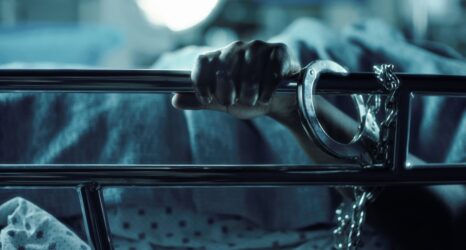 The Fight for Our Rights: Women, Mass Incarceration, and Criminal Justice