Loopholes in labor law allow agriculture to be the only industry where children can work virtually unlimited hours beginning at age 12. A former child farm worker herself, Norma Flores López is fighting for labor protections in agriculture—especially for children and women.

At age 12, Norma Flores López signed the paperwork to begin legally working full-time on a farm. “But at that point, I had already started working,” she said. “My earliest memories were around age 9.”

López’s experience in the fields began with playing games alongside her parents who were unable to access child care. As a 9-year-old, López would bring water out to her parents to pass the time. Water deliveries evolved into picking low-hanging fruit, racing to fill her parents’ baskets—then soon enough, full-time work.

“I didn’t realize what an impact it would have on my body, having to go out there full-time. Full-time for farm workers—including children—is not 9 to 5, five days a week. It’s upwards of 10, 12 hours a day, seven days a week—sometimes three, four weeks straight without any days off,” López told Ms.

López was one of the hundreds of thousands of children who work on farms throughout the U.S. While the exact number is unknown, current estimates place around 300,000 minors working on farms across the country.

“Full-time for farm workers—including children—is not 9 to 5, five days a week. It’s upwards of 10, 12 hours a day, seven days a week—sometimes three, four weeks straight without any days off.”

“We had a job that needed to be complete, and we needed to complete it,” said López. That job is completed no matter the conditions: cold mornings met by hot days; being sprayed with pesticides; handling sharp equipment and heavy machinery; facing long days without always having water or bathrooms available; and even facing harassment by growers.

Now as a successful labor rights activist recently recognized by the U.S. Department of Labor with the 2021 Iqbal Masih Award, López’s life experiences directly impact her work. Her activism began as a teenager when she was asked to speak about how growing up as a farmworker impacted her education, health, well-being and future. Eventually, she landed her current position as chief programs officer at Justice for Migrant Women.

In 1938, the Fair Labor and Standards Act outlined basic workplace rights and protections for most professions. Two industries were intentionally excluded: domestic and agricultural workers.

This exclusion of protections has roots that stem directly from the legacy of slavery in the United States. Over the years, ensuring a cheap workforce meant that migrants eventually came to meet U.S. labor demand. The structure of the industry encourages labor exploitation for the sake of profit, regardless of worker immigration status.

For agricultural workers, exclusion from federal labor law means employees do not receive overtime pay, the right to organize, affordable health care, workers’ compensation, sick pay and disability insurance. Workplace protections against harassment and discrimination under Title XII also do not apply to farmworkers. The isolated nature of farmwork makes women and girls especially vulnerable to sexual harassment, with 80 percent of women farmworkers experiencing some form of sexual violence while on the job.

The experiences of many child farmworkers begin similarly to López’s—alongside their parents in the fields. Beside serving as a way for parents without child care to keep kids occupied, there is also incentive to increase pay-out by harvesting more. “Usually, a family will be under one name,” said López. “For us, the more hands the more fruit goes into those baskets, the more that we get paid.”

Since the true number of people working under one name is concealed on formal records, there is often inflation in reported farmworker wages. “If you divide it up between them, they make less than minimum wage,” said López. “So it encourages additional people to be brought in under there—and that includes children.”

As the law currently stands, agriculture is the only industry where children can legally work unlimited hours outside of school beginning at age 12. Tasks determined to be hazardous by health and safety experts are able to be performed by minors as young as 16, whereas hazardous tasks in any other industry are reserved for adult employees. Evidenced from the law down to day to day norms, dehumanization and exploitation run rampant.

“When I would go work in the fields, I was treated as less than every day,” said López. “I was yelled at, cursed at, called awful names—told that I was worthless because I couldn’t do this job fast enough or good enough for them.”

López recounted a memory where the planters kept demanding that her crew hurry up in order to assist another unit of white, teenage workers with summer jobs on the farm. “It meant that the crew leader got to hang out with the other white crew leaders, instead of having to oversee a bunch of Mexican workers,” said López. “And when we would get there, the contrast and his attitude and his language, and in how he acted with people, night and day.”

“When I would go work in the fields, I was treated as less than every day. I was yelled at, cursed at, called awful names—told that I was worthless because I couldn’t do this job fast enough or good enough for them.”

Educational attainment also becomes an obstacle for child farmworkers, resulting in a drop out rate among child agricultural workers four times that of the national average. Beyond education, the majority of work-related child fatalities happen in the agriculture industry—accounting for 237 of 452 known child work-related deaths between 2003 and 2016.

López’s experience as a child farmworker taught her that “many of these promises of futures … [weren’t] meant for everybody. That was meant for a certain set of people, and it excluded so many of us.”

As the pandemic divided industry into essential and nonessential, farmworkers did not have the opportunity to work remotely. “That was something that we counted on them to provide us: three meals a day, seven days a week, no days off,” said López. “And they were out there doing that very much to their personal expense, sacrificing their health and that of their families.”

Meanwhile, migrant workers without social security numbers did not qualify for stimulus payments. Despite being more vulnerable to COVID—living in close quarters and traveling to work in groups; lacking adequate sanitation infrastructure in the fields; and exposure to pesticides—government assistance was deemed unnecessary for a workforce whose labor was essential for the country’s survival.

Understanding this vulnerability early on, López and her team quickly got to work mobilizing for migrant farmworkers. Their relief work included the launch of an emergency fund for migrant workers, teaming up with other organizations to supply workers with masks, and working with local health departments to mobilize vaccination clinics in rural communities.

“We had this opportunity now to use our voices, our platform, our connections, to be able to provide those resources to those small little communities that would have otherwise not had any way of being able to help their people,” said López.

Planting the Seeds for Safe and Healthy Futures

“We are the wealthiest country, we have the ability to be able to provide a future—a healthy, happy life—for each of these children and give them the resources that they need to be able to fulfill that promise,” said López. “But we don’t. And part of it is because they’re not humanized.”

In the ongoing effort to humanize child farmworkers—and agricultural workers generally—López shared with Ms. an upcoming project at Justice for Migrant Women called The Humans Who Feed Us. The goal of the project is to “create these portraits and share the stories of the hands who feed us but showing that they’re more than just hands, they’re more than just their labor,” said López. “They are whole people who have stories.”

López also works on legislative initiatives to combat child labor in agriculture. One of the most crucial bills is the Children’s Act for Responsible Employment and Farm Safety, which would close loopholes created by the Fair Labor Standards Act. The legislation brings age and work hour standards for children in the agriculture sector to meet the standards for minors in any other sector.

The legislation would instill protections for children against pesticide exposure and create reporting requirements for workplace injuries. Enforcement measures are included in the bill by establishing a minimum penalty for child labor violations and increasing the maximum penalties for said violations.

“We have so much of this common struggle, and until all of us are free, none of us are free,” said López. “It’s not about just pawning it off and finding somebody else to exploit—it’s about ending those systems of oppression.”

Lily Sendroff is an editorial fellow at Ms. and a rising senior at Smith College in Northampton, Massachusetts. She majors in the study of women and gender and government, with a concentrative subfield in comparative politics. Her work typically focuses on feminist economics, transnational feminism, and policy analysis. 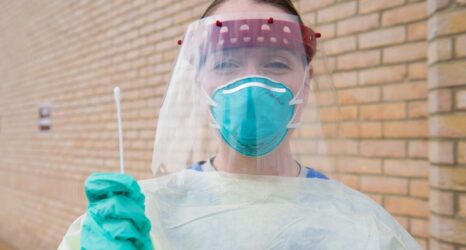