“The most important thing that I want to say to young women in all fields is this: Stand up and fight to be treated equally.”

Penny Harrington—the chief of the Portland, Oregon Police Bureau in the mid-’80s and the first woman to lead a major U.S. city’s police department—died at her home in Morro Bay, Calif., on September 15, 2021, at the age of 79.

Penny Harrington became a police officer in 1964 in Portland and headed the Feminist Majority Foundation’s National Center for Women and Policing (NCWP) at its founding in 1995. Harrington served in Portland in the Women’s Protective Division and began to challenge discriminatory policies after a few years in the force. She became chief of police in 1985 and was the first woman in America to lead a police department in a major city.

She is still regarded by some as a maverick who challenged the system—and by others as a celebrity. She faced discrimination and harassment, personal tragedies and triumphs as she battled a a male-dominated system, single-handedly fighting discrimination and inequality. In her revealing autobiography, Harrington describes with great candor her 23 years in law enforcement—and why she left her hard-won position following a scandal and rumors that rocked Portland and were covered in newspapers around the country.

She was an internationally recognized consultant on women in the workplace, and counsels a variety of companies and public agencies on issues of discrimination in the workplace. She was Ms. magazine’s Woman of the Year, inducted into the International Association of Women Police Hall of Fame, and named by Harvard Law School as one of the 10 most influential women in law. She worked for the California State Bar as a special assistant to the director of investigations, and served on the Los Angeles Police Commission Gender Equity Taskforce. She also was named to the Webster Commission which was established after the 1992 Los Angeles riots, and was co-chair of the Women’s Advisory Council to the Los Angeles Police Department.

We’ve compiled some highlights from a 2013 interview with Next Women Business Magazine below.

On the history of the NCWP:

Tell us a bit about the National Center for Women & Policing. Why was it founded and what are its goals?

Penny Harrington: The NCWP grew out of the riots in Los Angeles following the verdicts of the men who beat Rodney King. The Los Angeles Police Commission established a Women’s Advisory Council to examine the LAPD and make recommendations on how they could recruit and retain more women. I was appointed to be one of for women to lead the council. Kathy Spillar of the Feminist Majority also held one of those positions.

When we finished our work and published “A Blueprint for Gender Equity in the Los Angeles Police Department,” Kathy asked me to come to work for the Feminist Majority and set up the NCWP. The goals of the NCWP were to increase the numbers of women in policing at all levels and improve the response of the police to crimes against women. The U.S. Department of Justice published a book we wrote: Recruiting & Retaining Women: A Self-Assessment Guide for Law Enforcement, which can be obtained from the National Criminal Justice Reference Service.

On what has—and hasn’t—changed for women in policing:

What are the biggest obstacles facing women in law enforcement careers today?

Harrington: Unfortunately, the obstacles have not changed much since I started in 1964.

The single biggest obstacle is the culture that is unaccepting of women in law enforcement. There are still entry standards and training programs that wash out women in higher percentages than men.

The culture still values physical strength and use of force and devalues reasoning and negotiating skills. Also, because a great deal of men entering the law enforcement agencies come from the military, they bring those rigid attitudes with them.

Now I do want to say here that there are many wonderful men in law enforcement who are supportive of women and who are excellent community officers.

“The single biggest obstacle is the culture that is unaccepting of women in law enforcement.“

Who do you most admire, both within your own field and as a role model in life?

Harrington: I have always admired Eleanor Smeal. I first heard of her when she was the president of NOW. Her words kept me fighting for equality all my life. And I cannot separate our Katherine Spillar, the vice president of the Feminist Majority and the publisher of Ms. magazine. And, of course, who does not admire Hillary Clinton!

And lastly, some advice:

Harrington: The most important thing that I want to say to young women in all fields is this: Stand up and fight to be treated equally. Too many women cave in when the pressure gets tough. There are generations of women who have paved the way for you with their sweat and tears. You owe it to us to not give up the ground we gained so that you can have the career of your dreams. 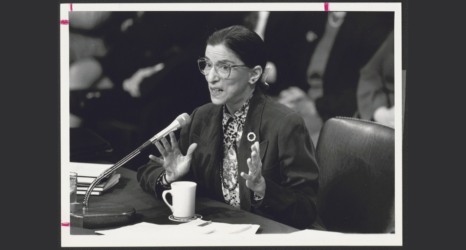