"Second Chances" for Those Released From Prison Implies They’ve Been Given a First - Ms. Magazine
Skip to content

We survive the dehumanization of incarceration only to come home to face even more barriers to success—perpetuating the cycle of poverty.

If I asked you to give me a second chance at anything, the implication is that I’ve been given the first one.

“Second chance” ignores that actual lives and communities have been decimated by inequitable laws, rabid police officers, overzealous prosecutors, racially homogenous juries and intolerant judges. At any given time in this country, there are approximately 2.3 million people behind bars. Seventy percent of those impacted individuals don’t have a high school diploma. In my case, I dropped out of school when I was 11 years old, unable to read or write. Growing up, my family experienced chronic homelessness, and education took a backseat to my survival. With everything that was stacked against me and my family, I became a prime target for exploitation at the hands of our broken criminal justice system, leading to my wrongful conviction.

For most people who are directly impacted by incarceration, the idea of a true chance brings hope that for the first time in our lives, we will have a real opportunity to flourish and to thrive. We dream of a clean slate—free from the injustices we experienced before we were sent to prison. According to the Prison Policy Initiative, 94 percent of people who are locked up will be released. Once home, directly impacted individuals are most often relegated to menial jobs that don’t allow us to utilize the skills we developed or honed while in prison. Those menial jobs mean that we lose up to $30,000 annually because the more elevated and skilled jobs don’t consider people who have criminal records. That, in turn, creates perpetual poverty.

We survive the dehumanization of incarceration only to come home to face even more barriers to success. In Ohio alone, there are more than 800 laws and administrative rules that limit job opportunities for Ohioans with convictions, and across the country the one in three Americans who have some kind of criminal record have to face restrictions to accessing education and housing—barriers that have devastating events from generation to generation. Being accused or convicted of a crime shouldn’t mean your rights are up for grabs.

It’s difficult to gauge whether someone deserves a second chance if you are determined to use their past as the barometer of worthiness. We are not the number that replaced our name. We are not the inmates and prisoners we are called. We have talent, skills and aspirations that the carceral system can’t extinguish.

As a child, art was always fun. In prison, it was a matter of survival. Once released, I dreamed of ways to intersect my love for art with my desire to educate people on the intended and unintended consequences of mass incarceration. I reached out to ArtWorks Cincinnati who was responsible for creating beautiful murals to gauge interest in a project designed and led by system-impacted people. My next call was to Art For Justice to get some financial support to make it happen. They enthusiastically obliged.

From that support, the Time Saved Vs. Time Served mural was created. The mural had a greater calling than that of others. It was designed to increase awareness on the issues of women’s incarceration, specifically and demonstrate the importance of not just accepting people who have made mistakes but embracing them. Redemption can be a lonely road but when you know people are cheering for your success, it makes a huge difference. The mural also employed the artistic talent of someone who was currently living inside of a carceral institution, who received the same compensation that she would if she were free. That was to demonstrate that humanity can’t and shouldn’t wait for freedom. One of the ways to end mass incarceration is to bring about proximity to the issue by creating proximity to those who are impacted.

Locking people up doesn’t make your community safer. However, helping people when they come home from prison does. We have to call for policy changes that end senseless collateral consequences for those who are system-impacted.  We need to dismantle the narrative that people who have been to prisons are dangerous and can’t be trusted. Employers should commit to abolish their antiquated and unnecessary bans on hiring individuals with records. We have to stop calling people inmates, criminals, defendants, felons and ex-cons. We are people who should be restored to full citizenship in every state. This includes being able to participate in our democracy by voting, regardless of the crimes for which we were convicted.

While no one holds the power to redemption, we all have the ability to extend grace and kindness to those who are looking forward to another chance to get things right.

Tyra Patterson, an advocate and artist, is creating a world where people impacted by incarceration are fully welcomed back home and not defined by their mistakes. Currently living in Cincinnati, she serves as the community outreach director for Ohio Justice and Policy Center and on the Board of Directors for ArtWorks Cincinnati, Black Art Speaks, Art Academy of Cincinnati and Just Media. 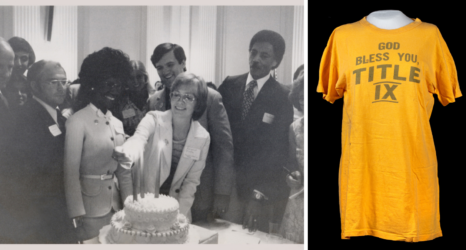 ‘Activism On and Off the Field’: Art Exhibit Commemorates 50 Years of Title IX, Prohibiting Sex Discrimination