We Need More Women in Leadership at the Fed: Personnel Is Policy - Ms. Magazine
Skip to content

The white male status quo leadership at the Federal Reserve—the U.S.’s central bank—is clearly not working. It’s time for women to be at the helm of Fed leadership.

Senior officials at the Federal Reserve, our nation’s central bank, were recently caught in an apparent insider trading scandal—rightfully elevating ethics concerns regarding an institution with massive control over the economy. Recent news broke that the Fed Chair Jerome Powell, whose net worth is between $20–55 million, was personally involved in stock-trading during the pandemic.

Above all, this exemplifies a defining pattern of U.S. government over the last 50 years: Something is broken about the status quo of who presides over national policy decisions. The officials caught in this scandal are all white men—with backgrounds in the private sector—and epitomize what happens when government officials prioritize their own interests over that of what’s best for the public good.

Progressive advocates have long argued that the Fed can and should be remade in ways that help deliver a more equitable economy, but this is especially critical now as we confront a deeply unequal recession. It’s important to remember that racial equity, which is essential to gender equity, was a top priority for the Biden administration when it took office in January of this year.

The president now has a historic opportunity to remake the all-white Federal Reserve Board in the image of the coalition that won him the White House and to promote the racial and gender justice that is necessary for both a true recovery and a fully realized Build Back Better agenda.

A major obstacle, Fed Chair Powell is in the way of a stronger, more inclusive agency. Biden should replace him and appoint new leadership that will build a better Fed and help produce a more equitable economy. Lael Brainard, Lisa Cook and Sarah Bloom Raskin demonstrate the personnel we need to drive policy that supports women and women of color—and our society at large.

Ongoing Failings at the Fed

From prioritizing Wall Street over the rest of us to lethargic action on climate financial regulation, the Fed under Powell is not working for most people. A clear problem, especially in our current recession, is Powell’s hyper-focus on the overall unemployment rate rather than building policy around deeper, more explicit data—such as the Black unemployment rate or the rate for Latinx women. As Janelle Jones and Jared Bernstein wrote in June of 2020, a fairer job market is possible if we center policy solutions around who’s most left behind.

There is so much more here that can be done if not for the limits of Powell’s imagination.

A fairer job market is possible if we center policy solutions around who’s most left behind.

For instance, our communities that are on the frontlines of reckoning with climate change need leadership at the Fed that prioritizes aggressive action. Climate activists have already pointed out that the Powell Fed is significantly behind other countries’ central banks that are much more proactive. Under new leadership, the Fed could actually implement climate risk policy that would significantly disincentivize investments in fossil fuels by big banks and financial institutions.

Similarly, the Powell Fed failed to support state and municipal governments that were hardest hit by COVID-19. Last year, the Fed had set up a Municipal Lending Facility (MLF) that was intended to help cities and states get through the pandemic. However, the lending terms were so predatory that only two borrowers used it. A Brookings report states that initial eligibility for the MLF was so strict that “none of the thirty-five most African American cities” met the criteria for direct assistance.

The Fed could have been a lifeline to state and local governments that could have shored up local safety net programs from housing to child care assistance for families in need. Instead, Powell chose to prioritize shoring up corporate America over the rest of us.

We Need Women in Power—at the Fed and Beyond

The white male status quo leadership at the Fed is clearly not working. We are living and working in multiple ongoing crises. We’re calling on President Biden to meet the moment and put in a new slate of leadership at the Fed that prioritizes working women. We believe that this is the time for women to be at the helm of Fed leadership—namely, current Fed Governor Lael Brainard, economist Lisa Cook and law professor Sarah Bloom Raskin.

Each of these women has a long and distinguished career history that demonstrates their expertise in macroeconomic policy, with a focus on racial and gender equity. These are the women leaders who would remember those that the Fed has forgotten—including Black women workers and single mothers—and they would pave the way for more women, especially Black and brown women, to be involved in economic policymaking. Because let’s be honest: We don’t need any more men making decisions for us.

These women leaders would remember those the Fed has forgotten—including Black women workers and single mothers—and would pave the way for more women to be involved in economic policymaking.

Of course, one’s identity and proximity to oppression does not guarantee progressive leadership once in power, which is why we’re elevating women nominees with proven track records. Notably, though, Sen. Elizabeth Warren has proposed that all Fed officials be banned from owning or trading individual stocks, so that personal interests do not supersede the collective good within the agency.

At the end of the day, justifying the unethical and status quo leadership of white men in powerful economic policymaking roles hurts us all, but especially Black and Brown women. Issues like the Fed’s apparent insider trading scandal—let alone our government’s inept response to the pandemic, climate change, and the consequences for women and women of color caused by these and many other crises—point to a clear need for a diverse set of leadership at the Fed and across our government more broadly that is committed to public service, not personal profiteering.

Personnel is policy. We’ve seen what white men get us, which is a lot for them and not much for us. Let’s put powerful women in power and reshape the Fed into an institutional force for race, gender and economic progress.

About Vasudha Desikan and Solana Rice

Vasudha Desikan is the political director at the Action Center on Race and the Economy (ACRE).
Solana Rice is the co-founder and co-executive director at Liberation in a Generation (LibGen). 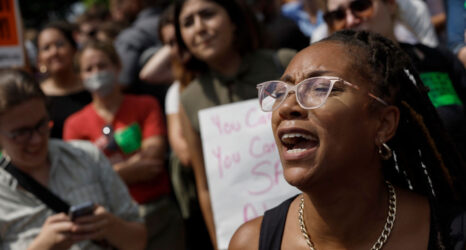 President Biden Condemns Supreme Court Decision: ‘This Is Not Over … Roe Is on the Ballot’