Sex and the Single Woman at 66: Ageism and Sexism be Damned - Ms. Magazine
Skip to content

It’s time we had a candid conversation about sex and the single senior, especially if you’re a woman.

Last month, I turned 66. I’ve had no age-defying surgeries. I have accepted—but will never embrace—the 10 extra pounds on my 5’1″ frame. Still, men haven’t exactly been running the other way.

One morning earlier this year, after we in the 65-and-older crowd were vaccinated, I received flirty texts from three male friends inviting me out. I smiled reading each one, but I didn’t text back.

Like so many aging single women who like sex, I had succumbed to the double whammy of ageism and sexism. Engaging with any of these three men would require scheming, sneaking around and outright lying to my millennial daughters. It was exhausting.

Studies show that women well into their 80s and 90s wish to remain sexually active. If they aren’t married or in a committed relationship, however, they likely have given up on sex. For many, the problem is a shortage of available good guys or the dreaded dry vagina. For others, it’s the tsk tsk of society—and family—that keeps us home, watching Netflix alone.

As a feminist of the 1970s who fought long and hard against sexism, including making the bedroom a level playing field, how can be stopped in my tracks by my own daughters?

I was divorced in 2016 and waited the recommended year before going online. Match.com served up a plethora of men who seemed too good to be true. Of course, in the end, they were. Still, I decided to indulge.

Despite my discretion, my daughters quickly caught on. The younger lived with me. The older was newly married and lived nearby. They didn’t hesitate to share their displeasure.

I was pouring coffee one morning after a post-divorce date when my younger daughter walked into the kitchen. I offered her my cup. She eyed me suspiciously.

“You had sex last night.” She spat out the words and poured her own coffee. I was stunned. He left long before she came home, I thought. How could she know?

“I can see it all over your face. You look like someone who just had sex!”

Growing up Catholic, I learned early on you can sin to the high heavens as long as you are contrite and do your penance. I continued to seek and find the wonderfulness of a kiss, a caress, an orgasm on Saturday night, erasing the guilt by doing my daughters’ laundry on Monday morning.

For the next two years, I wore skinny jeans with heels and spent too much money on makeup brand Boom! By Cindy Joseph. I dated men who were 15 years younger and 10 years older. Some took me to wonderful restaurants, others to five-star hotels. We went dancing, to the movies and watched the moon’s reflection over Lake St. Clair. It wasn’t all Hollywood-like bliss, but it was close enough.

My daughters told me I was acting like a teenager. The younger continued to huff past me in the morning. The older told me she had no interest in meeting anyone. Ever.

The sting was not lessened by my therapist reminding me that children, regardless of age, have difficulty seeing their parents as sexual beings. Furthermore, she said, their reproach proved just how powerful the cultural messaging is against older women who don’t follow the rules.

Eventually, my daughters wore me down. I took my profile down from Match.com and let my gray grow out. I used the pandemic, as so many people did, to pull in and reflect. I babysat my new granddaughter and built up my freelance writing business. I made dinner for my girls and son-in-law and watched The Office reruns with them.

“Society is inclined to desexualize older adults. When older adults do express their sexuality, it’s often viewed with derision.”

As I pass from middle-aged to elderly, I think about how I will live out my final chapter—and with whom, if anyone. I have no clear vision of what’s ahead.

I do know, however, that sex is healthy, and I have no intention of calling it quits. Nor do I intend to apologize for it. I applaud the experts who shine a spotlight on the inequity of it all and propose solutions.

One such authority is Dr. Sheryl Kingsberg, co-director of the Sexual Medicine and Vulvovaginal Health Program at University Hospitals Cleveland Medical Center, and past president of the International Society for the Study of Women’s Health. She believes the way to change negative stereotyping of menopausal women starts with their doctors.

“Menopause and sexuality are not addressed in medical schools or residency,” she told me in a recent interview. “Most doctors can talk about a smelly discharge but are not comfortable asking about orgasm. They aren’t taught how to deal with issues of desire and arousal.’’

On average, women enter menopause at 51 and live well past 80. That means many of us could spend one-third of our lives being censured if we dare to exert ourselves as sexual beings.

“Most doctors can talk about a smelly discharge but are not comfortable asking about orgasm. They aren’t taught how to deal with issues of desire and arousal.’’

During the summer, I ran into a former colleague from my early newspaper days. He asked me to dinner. Then he invited me to go birdwatching. He arranged a bicycling outing and reintroduced me to old reporter pals.

A week ago, I invited him over to start the third season of The Kominsky Method. We were on the sofa getting cozy when my daughter came home early. She stomped into the house and, without saying hello, asked him to move his car.

He left immediately. This time, I glared at her.

“That was rude,” I said. She started to object. I cut her off: “You don’t get to have a say in what I do and whom I see. Not anymore. I expect you to treat me and my friends cordially. Always.”

Kingsberg said I should have done that a long time ago. “Why, in any realm, should a woman feel bad about the fact that she is healthy and has a good strong desire? We should have fun and experience passion. To keep that going is something you should embrace.”

“It’s good you told your daughter to knock it off,” she said.

Now, we need to stand up to the rest of society and make it clear that our right to the “pursuit of happiness” includes pursuing pleasure, no matter our age, gender or preferred position.

Anne Marie Biondo, a long-time journalist and PR executive, is a freelance writer living in Ann Arbor, Michigan, focusing on social justice issues. She is currently working on a novel based on her grandmother, a child bride in 1918 Detroit. 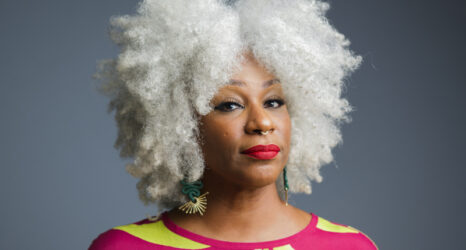