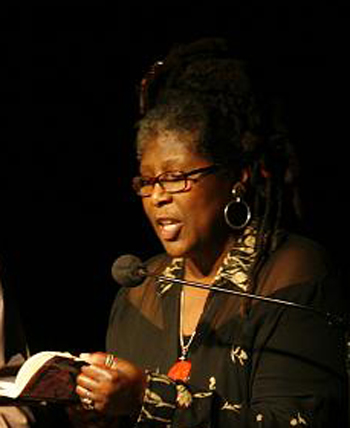 Feminaissance, a new anthology of women’s experimental essays, poetry and fiction, includes the work of renowned Los Angeles African American poet Wanda Coleman.  I had a chance to speak with her recently about her writing and her feminism.

MONTEI: What role do you think women’s writing has played in the feminist movement?

COLEMAN:  I remain a believer in the power of creative writing to change, heal and transform. Women’s writing will forever remain an important resource and wellspring. At its finest, it inspires, deepens and prolongs the ongoing dialogue around issues worldwide, often immeasurably affecting social change. These changes may seem incremental–we are still counting the first woman to do this or that—and they may come too late for the majority, but they have come and will continue to come despite occasional political reversals and social upheavals. If there had not been a Sylvia Plath, an Ann Petry, a Tillie Olsen and a Joan Didion, there would be no Wanda Coleman.

In your poem “Rape” [included in Feminaissance] you are unwavering in your raw depiction of a woman’s abuse.  It humanizes the dehumanized, which you’ve said is a specific aim of your writing.

There’s a devilish element in my selection of the crude language and graphic narrative of this poem. Some readers will have a visceral response; they will identify with the victim and actually feel raped. That was my intent. I also wanted to go against the prevailing platitudes about rape that often cause naïve women to get themselves killed—believing that trying to fight off a man who outweighs you by 50 to 200 pounds is the wisest tactic. As a young woman, I never thought twice about going blow-for-blow, toe-to-toe with a man, because I’m a big woman. But after enough busted lips and black eyes, I figured there must be more viable alternatives. Even if you’re exposed to STDs, it is still better “to live to fight another day.”

Do you set out to write pieces about sociopolitical issues?

I begin with the advice at the core of traditional writing courses: Write what you know. My content is usually inspired by the day-to-day events that go on around me as I move through time and space. They may happen to me, someone close to me, or I may observe them in close proximity. Often, a line or phrase I’ve saved triggers a poem in retrospection. Then I draw on the basic questions of journalism: who, what, where, when, why and how. Style is usually my last consideration as I reshape and revise my material—using the vernacular coupled with what I know of figurative language.

I think many feminists often feel overwhelmed by the deep-seeded systemic oppression we face.  Are there specific actions or avenues you encourage women to take to incite change?

Remember the phrase “support network?” Make the effort to develop or join one that addresses your needs. Such a group needn’t exclude enlightened men. Also, sustain and maintain—that is, mental and emotional health are as important as physical health. Take care with both; good health sustains activism. And don’t think about it—do it! This is something my father used to bark at me. Now I bark it at myself. The little girl inside me no longer shrinks. She understands that too much talk and the subsequent inaction it often generates may be disastrous when matters are urgent.