The Gayest City in America - Ms. Magazine
Skip to content 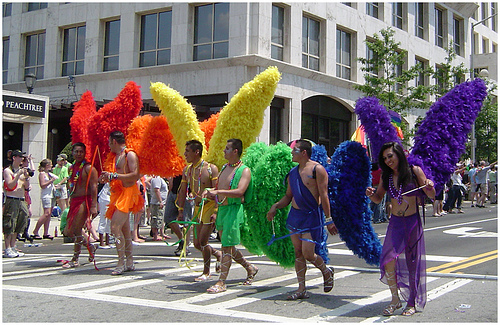 One would think that a story on the gayest city in America would also:

But as Jeffrey McCune, an assistant professor of American studies and women’s studies at the University of Maryland pointed out to me,

Atlanta is a gay city, but I’m not sure how queer it is. By queer, I mean being radical and disrupting norms. There is a commercial gayness amongst black gay men in ATL that really makes it less exciting and less politically charged.

McCune makes an excellent observation. Atlanta may be gay but if it isn’t quite queer that would explain why all the points on my bulleted list were missing from the ranking.

Conformity to social norms would also explain why Midtown, a predominantly white and white-collar section of Atlanta was named as the “gay epicenter.” Atlanta is 61.4 percent black. Of course Atlanta has gay black people.  In fact, a 2005 NPR report disclosed that “Atlanta has the largest population of black gay couples in the United States.” Unfortunately, The Advocate’s normative ranking system doesn’t acknowledge that.  Instead, the central focus is on what it means to be white, gay, middle- to upper-class, and seemingly male. Although the “ladies are gracious” in Atlanta, the word lesbian is not mentioned at all in the summary findings for the gayest city in America.

Additionally, normative ranking systems don’t acknowledge the various ways African Americans self-identify in relationship to gayness. Because of rankings like The Advocate’s, gay  is often perceived as white and male.

I hope Atlanta can keep its crown for the gayest city in America, but I also hope that the next time rankings are released, being queen means being queer too.