Don't Be Shamed by "The Weight Talk" - Ms. Magazine
Skip to content 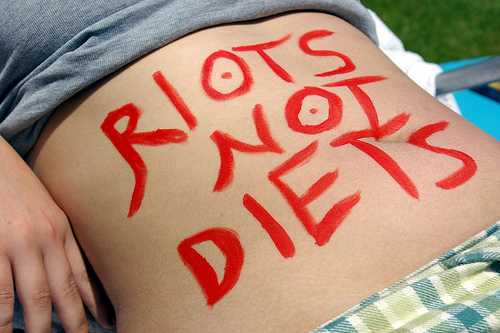 I recently had my annual physical, and I got The Weight Talk for the first time. Luckily, I had come prepared.  While driving to the appointment, I even rehearsed in anticipation.

When I got The Talk, I responded by saying that I will never count calories.  I asked the doctor in earnest why he would care about my weight if I had good health, good blood pressure and so on. I listened to his answers. And a week later, I sent him a copy of Health At Every Size (a book which also has a website).

After all this time, fat is still a feminist issue, and so is the national hobby of dieting, especially for women. We subject each other, and sometimes ourselves, to contempt when all our extensive efforts yield insufficient or short-lived weight loss.  But, as I’m pleased to report from experience, The Weight Talk doesn’t have to include contempt and shaming.  Here is what I’ve learned:

The correlation between obesity and ill health is much weaker than most people believe.  Weight is often used as a stand-in for health, but it’s a poor substitute. We know intuitively that thin people can be unhealthy; it’s also true that people can be both “fit and fat.”

When followed for five years or more, diets–all diets, including the Weight Watchers program–have an enormous failure rate (see research here and here). If one accepts the premise that bodies have differing natural set-points for size, this makes intuitive sense.  Dieting can be very taxing on one’s money, time, emotions and even health: Ironically, dieting can be just as risky to health as stable obesity.

According to critics like sociologist Abigail Saguy [PDF], our national obsession with weight could also be viewed as a “moral panic,” where public attention is focused on people who symbolize a violation of moral values. In the case of obesity, overweight people are characterized as gluttonous and lacking in judgment, especially if they are people of color or poor.

When concern about obesity sounds like, “why can’t they make better choices,” sometimes the underlying message is racism and classism, as when food activist Alice Waters lamented on 60 Minutes that some people would rather buy Nikes than organic foods. The fact is that the current economic recession is forcing some people to prioritize thrift over nutrition. It’s an especially inopportune time (though I doubt there’s any good time) to be judgmental about the way people eat.

As an alternative to the judgmental messages about eating and weight, there are books like Health At Every Size and Lessons From the Fat-o-Sphere. There are several online communities and blogs where women (and men) remind each other not to fall for the mainstream, self-critical, shaming messages about weight loss.  “Don’t You Realize Fat Is Unhealthy” at Shapely Prose is a great starting point.  I share that link with people all the time, since I can’t buy and mail everybody a book.