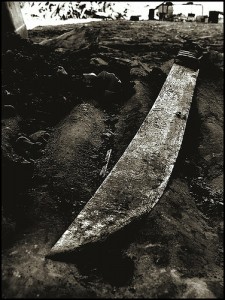 In the village where I grew up, in the backwoods province of Berbice, Guyana, several recent murders of women recall a spate of brutal killings on British sugar plantations in the West Indies in the late 19th century. Indentured laborers on the plantations, suspecting their wives of infidelity, hacked the women to death with their cutlasses, the long, curved blades used in the fields to cut sugarcane. The murders this year in Berbice show how little has changed in a century. The victims all appear to have been killed by their husbands, and cutlasses played a part in three of the cases.

In the most recent case, on March 27, a woman with a pretty, round, baby face–everyone called her Pinky–was mutilated by her husband after he came home late from a night of drinking. They had often quarreled about his drinking, and he had physically abused her for many years. This time, as they fought, he pulled the machete he used in his job as a cane cutter out from under the bed. He “chop’ she” (“chopped” her), as they say in Guyana. (This kind of assault is so common, it has its own idiom.) It was such a fierce attack, three fingers were severed from her left hand. He also used the cutlass against his mother-in-law, who lived with the couple, but she survived. The husband is in hiding from the police.

From an airplane, Berbice might seem the epitome of order. The sugar cane fields, laid out in grids, give that false impression. However, the killings suggest a deep disorder in the most basic social institutions–marriage and family. Reports in Guyanese newspapers indicate that domestic violence is on the rise. Nationwide, six women were killed by their partners in March alone, a large number for a country of Guyana’s size.

I am working on a book that explores the history of this violence: As a result of quotas set by British colonial administrators, men outnumbered women by 3 to 1 in all the British sugar colonies that used indentured laborers from India to replace slaves on plantations. The shortage of women led to wide-scale infidelity, which in turn led to a rash of machete murders, from Fiji to Mauritius to the West Indies. That history has left those societies as scarred as the women who had their noses lopped off. They are so disfigured that, more than a 100 years later, cutlass killings still happen.

The Guyanese-American poet Mahadai Das suggests how deeply this colonial history has marked relationships between men and women in Guyana (“El Dorado,” in Sir Walter Raleigh’s imagining) in her poem, “Beast”:

In Gibraltar Straits,
pirates in search of El Dorado
masked and machete-bearing
kidnapped me.
Holding me to ransom,
they took my jewels and my secrets
and dismembered me.

The reckoning lasted for years.
Limbs and parts eventually grew:
a new nose, arms skillful and stronger,
sight after the gutted pits could bear a leaf.
It took centuries.

In the cave where they kept me,
a strange beast grew.
With his skin of glistening jewels
and his deadly tongue,
even I was afraid of him.

In the dark Ajanta caves of my breast
ever since he has stayed,
with his measure of venom,
his exact poison and scintillating glitter.
At a certain hour, I almost love him.

I imagine that, at certain hours, Pinky Seeram also loved her husband.

Reprinted with permission from http://gaiutra.blogspot.com/.

Gaiutra Bahadur is a journalist and critic whose work has appeared in The New York Times, The Nation and Ms. She is working on the book Coolie Woman, about women indentured to British colonial sugar plantations.