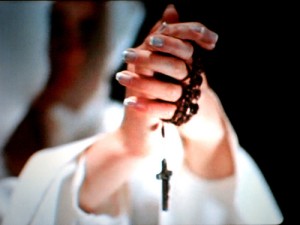 Maria Vittoria Longhitano, 35, has become Italy’s first woman priest. Ordained on Saturday in the All Saints Church in Rome, Longhitano is a member of the Old Catholic Church, which is not affiliated with the Vatican. A married teacher living in Milan, Longhitano has a degree in philosophy and theology. She was already a deacon in the church.

Longhitano told her congregation, “I have opened the way. Catholicism means universality, and without women it is mutilated.” The new priest hopes her example will “stimulate a debate among Catholics.”

The BBC reported that Pope Benedict XVI is opposed to the ordination. Not surprising, considering the previous Pope, John Paul II, went so far as to ban official discussion of the issue.

The Roman Catholic Church’s stance is that it obeys the directives of Jesus Christ, whose 12 apostles were all men. Apparently they haven’t seen The Da Vinci Code. Pop culture aside, there is much debate surrounding Junia, a woman apostle in the New Testament. Not that the Pope’s argument for sexism should be justified with a response, but it’s worth mentioning that there are doubts, even among the faithful, concerning what may have been lost in translation,

Longhitano, who is now Mother Longhitano, referred to the male-only policy as prejudice. Her new position is yet another example of progress, even if it’s from a rebel church.