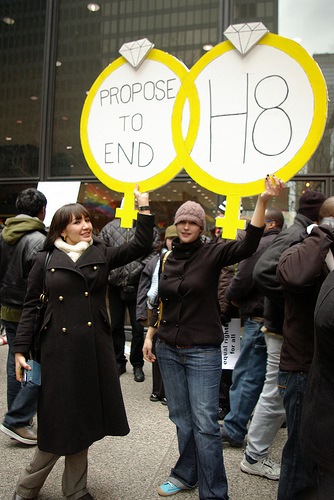 Prohibiting same-sex marriage, it turns out, is not about limiting the rights and freedoms of gay men and lesbians.

When proponents of California’s Proposition 8 delivered their closing arguments in U.S. district court yesterday–in a case that aims to overturn the law created by the successful ballot initiative– they gave us a new way of looking at the same-sex marriage ban. It’s really about controlling straight people, who can’t be trusted with the most dangerous threat to the social order: heterosexual intercourse.

In the courtroom on Wednesday, the gay marriage-ban advocates sounded more freaked out by straight people having sex all over the place than by any other topic. Attorney Charles Cooper couldn’t stop talking about procreation and about how the state needs to keep an eye on straight people’s sexual conduct or face dire consequences. If gay people are permitted to marry, he argued, then the state will be forced to deal with the “negative social consequences that  come from, say, unwed mothers raising children by themselves, and such as that.”

What, you are no doubt asking, do unwed mothers have to do with gay marriage? Perhaps it will help to hear how Cooper explained it to the judge.

The centerpiece of the pro-Prop 8 closing argument was what Cooper called “the responsible procreation rationale”. Unregulated heterosexual sex, Cooper claimed, poses a “threat” to the state’s interests.

[O]nly opposite-sex couples can procreate naturally and, therefore, it is only opposite-sex couples…who present, most importantly, uniquely, the threat to the society’s interests that marriage is designed to minimize, the threat of irresponsible procreation, the threat–the reality that when procreative sexual relationships between men and women are not channeled into marriage and these stable unions with these binding vows, then much more frequently the society has to–has to itself cope with the adverse social ramifications and consequences of irresponsible procreation.

The state must, in Cooper’s formulation:

attempt to ensure and to increase the likelihood–really, that’s what it boils down to, increase the likelihood–that naturally procreative sexual relationships will take place in an enduring and stable environment for the sake of raising children so that essentially the society itself… doesn’t have to step in and take upon its shoulders the obligations to help in the raising of those children.

According to Cooper, heterosexuals require exclusively heterosexual models as guides to encourage them to enter the bonds of matrimony. Apparently, if gay men and lesbians are allowed to get married, straight people are so dumb that they will be confused and run away from the institution. Furthermore, since it’s only straight couples who can accidentally have children, the state needs to supervise their sexual conduct and “channel” it (a term Cooper used frequently) into state-approved marital bonds and thus minimize “irresponsible procreation.”

Procreation was so central to Cooper’s closing arguments that he brought in the ultimate apocalyptic vision: If same-sex couples can marry, straight people might stop making babies altogether!

The right to marry is bound up with and proceeds from the fundamental nature and its fundamental purpose relating to procreation and the existence and survival of–of the human race.

So, which is it? Will heterosexuals run wild and saddle the state with excessive numbers of bastard children if gay marriage is legalized? Or will they boycott procreation and extinguish humanity once and for all?

The truth, of course, is that neither of these scenarios will take place. The “responsible procreation rationale” is a smokescreen put up by gay-marriage opponents who know that the real reason they want to deny gay men and lesbians the right to marry is because they do not value us as people, let alone as citizens who ought to have the same rights as other citizens.

Ted Olson, one of the lead attorneys arguing to overturn Prop 8, expressed surprise at hearing Cooper double down on the marriage-is-all-about-regulating-procreation argument. He pointed out that the campaign for Prop 8 focused much more on protecting children and straight couples from unspecified threats posed by same-sex marriage than on the insatiable sexual appetites of heterosexuals. Olson said that in the official campaign pamphlet for voters, the word “procreation” doesn’t even come up. Instead, he noted, the pamphlet drives home a strong animus against gays and lesbians:

[T]he words that I found the most were ‘protect our children.’ They are in there about five or six times in those four short paragraphs. Protect our children from learning that gay marriage is okay. That is to say that gay people are okay.

Olson summed up what the proponents of the marriage ban are really up to:

You are discriminating against a group of people. You are causing them harm. You are excluding them from an important part of life. And you have to have a good reason for that.

What the Proposition 8 federal trial showed, and what yesterday’s closing arguments underscored with an exclamation point, is that the defenders of the ballot measure cannot mount an intellectually sound argument in favor of its constitutionality. As Olson stated about the historic nature of this trial, “there will never be a case with a more thorough presentation of the evidence,” and the evidence speaks loudly on the side of marriage equality.

Don’t take my word for it. Read the transcripts here and see for yourself. Then you can decide if you’re more afraid of unwed mothers or unbridled bigotry.

Judge Vaughn Walker is expected to make his decision in the case in the next few weeks.