Hey Jewel, how’s it going? I haven’t heard from you in a while, and suddenly, you’re on the July cover of Shape magazine, making some eyebrow-raising statements. Let’s run you through the Feminist Litmus Test.

I can’t criticize your career. You grew up dirt-poor in Alaska, learned how to sing, spent some time living homeless and played the bars-‘n-coffee-shops circuit until you got discovered. You made buckets of money by putting out fairly woman-positive music. You donate a lot of that money to a clean-water charity in Africa. Cool. 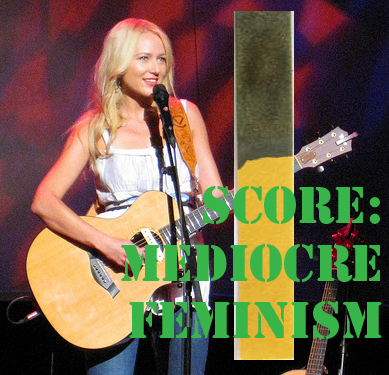 But you didn’t score so well on the Feminist Litmus Test this week. Sadly, you’ve fallen into the same attention-getting statement trap so many celebrities follow lately. I can sum it up as, “I’m not scandalous or interesting, so I’ll say something pathetic about my body image to get a People headline.”

Singer Jewel has revealed the personal effect being labeled “the chubby Renee Zellweger” by the press had on her. ‘My feelings were so hurt by that story, I ended up bingeing on an entire cake,’ the 36-year-old told Shape magazine. ‘Afterward, I actually tried to throw it all up, but thankfully I couldn’t do it. It made me think, ‘I can’t go down this road’. I had seen so many performers develop eating disorders or try to control their weight with drugs, and I decided I would do no harm to my body.

The entire story sounds concocted to me. Every celebrity interview cliche is there: “I eat my feelings.” “I feel fat, too!” “It hurts me when I hear mean things about my body in the press!” “I eat too much, just like you!” “I pseudo-identify with eating disorders!” “Everyone should be confident about the body they have!” What’s really obnoxious is how articles like these are always accompanied by the star looking very toned and svelte on the cover of a magazine.

This is not feminist. It’s just boring and conforms to every stereotype about women’s relationships with their bodies. And you topped it off with a great recommendation for building confidence:

‘We should be more like men, God bless ’em. They can take their shirts off and show their man boobs, and they don’t give a hoot.’

I’m pretty sure men do, in fact, have body issues as well. Sure, we’ve all seen the guys who nonchalantly let it all hang out. But I also know lots of men who are secretly terrified to ever be seen shirtless. I personally would not trade my female body issues for being a man– just Google “penis enhancement.” It’s tough to change that with diet and exercise.

Maybe I’m being too harsh on you, Jewel. I could really go for some cake right now.