Why Do Women Judicial Candidates Get Questioned on Their Sex Lives? - Ms. Magazine
Skip to content 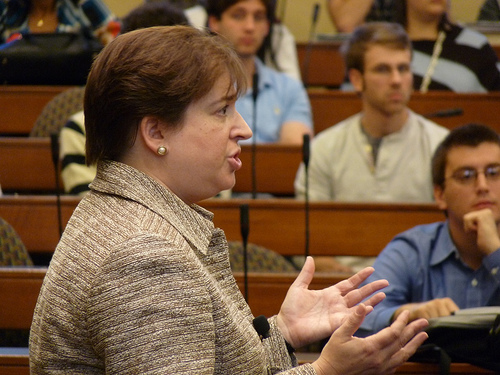 Republican Sen. Jeff Sessions is not supportive of Elena Kagan’s nomination to the Supreme Court. He believes she is too liberal and that her vast academic experience is not a substitute for experience “in the harness of the law.” But at least media speculation about her sexuality has not become an issue in her confirmation hearings. Not yet, at least.

Judicial appointments always generate substantial interest, but appointing women to top courts seems to produce a peculiar brand of anxiety, curiosity and consternation. I’ve experienced this firsthand. A few years ago I was shortlisted for a vacancy on South Africa’s equivalent of the U.S. Supreme Court. In South Africa, candidates are interviewed by the Judicial Services Commission, a body composed of judges, lawyers, legal academics, politicians and members of civil society. During my public interview, one of the commissioners suggested that I “get a boyfriend” as an incentive to return to South Africa (I reside in the U.S.).

I was flabbergasted, and unsure whether I should laugh or respond angrily. “You’re kidding,” I responded, giving him the opportunity to rectify what I considered an insulting question. He repeated the question. After an uncomfortable moment I was asked another question by a different commissioner. This exchange was not lost on the press.

If I was a man, would I have been asked about whether a girlfriend would bring me back to my homeland? My guess is no- the question reflected the stereotype that men migrate for professional reasons, women for “love”.

And I’m not alone among women judicial candidates in facing bizarre questioning or out-of-proportion reactions during the screening process.

Remember the hysterical response to Supreme Court justice Sonia Sotomayer’s statement that “a wise Latina woman with the richness of her experience” might more likely reach a “better conclusion than a white male who has not lived that life”? Conservatives claimed she was suggesting that her Latina identity would bias her decisions. But one wonders if such a statement would elicit a comparable reaction if uttered by a man. There was little outcry over Justice Alito’s statement, in a similar vein, on how his experiences as an Italian male shape his worldview.

Already, it’s been suggested that Kagan’s unmarried status (and a photo of her playing softball!) is evidence that she is a lesbian. Would a single male judicial nominee receive the same kind of scrutiny regarding his sexuality? Similarly, some years back, when applying for a promotion to a higher court, a South African judge who is a lesbian was asked whether having a woman as a partner would be a “hindrance” to her colleagues.

Why should the sex life of female justices matter? Why should their personal lives be a “hindrance,” or “get a boyfriend” be a viable piece of advice? The intrusive curiosity seems to reflect an inability to accept the competence and mental equilibrium of women judges. There appears to be an underlying fear that without the “balance” of a heterosexual home life, female judges will emotionally disintegrate from the stresses of the position.

Such attitudes should be of great concern to us, because the appointment of women judges is not just morally the right thing to do. Studies show it is necessary if the legal system is seen to represent marginalized individuals and groups, and, more importantly, if the legal system is to retain its credibility with the majority of the population.

Women judges also bring a different judicial voice, which makes sense given the discrete experiences of women as the major caregivers of children and the elderly. As Justice Sandra Day O’Connor has noted, “Women professionals still have primary responsibility for the children and the housekeeping, spending roughly twice as much time on these cares as do their professional husbands.” Women more openly exhibit concern about issues such as reproductive rights, sexual harassment and maternity leave.

Take, for example, the two first women judges of the South African Constitutional Court, Justices Yvonne Mokgoro and Kate O’Regan. The two decided a prominent case regarding an action former president Nelson Mandela took shortly after his inauguration, pardoning all female prisoners (except the most dangerous) who had children under 12. The challenge by a male prisoner who was similarly situated was rejected on the grounds that this on-the-face-of-it discriminatory pardon did not violate the principle of substantive equality. In other words, Justices Mokgoro and O’Regan looked at the reality of women’s lives in South Africa, noting that they are the major caregivers of children, and concluded that they would overwhelmingly benefit from the pardon.

Many people in the U.S. probably believe that justices Sandra Day O’Connor and Ruth Bader Ginsberg made a positive difference regarding the issue of gender equality by virtue of being women, as well as by the force of their intellect and knowledge. Justice O’Connor voted with the majority not to overturn Roe v. Wade in 1989, while Justice Ginsberg recently was the deciding voice in ruling the strip-search of the young woman plaintiff unconstitutional, noting that her colleagues “have never been a 13-year-old girl.”

The very presence of women judges challenges the traditional image of the detached, neutral judicial figure–essentially male–that has pervaded law practice and legal education. Women judges open the possibility that judging itself requires an aesthetic of empathy, understanding and compassion. These traits create the space for a wider societal understanding of the judge as quintessentially human, not a distant judicial automaton. Diversity on the bench, whether based on race, gender, sexuality, or disability, opens the possibility of a court that embraces a cacophony of societal voices and perspectives, removed from the historical singular voice that is neutral, impassive and detached.

As a woman, Elena Kagan will certainly make a difference on the Supreme Court–helping its credibility, challenging the notion of the white male judicial automaton, bringing a distinct worldview on issues of concern to women, and providing inspiration to other women that they can potentially be judges. Most significantly, in Kagan’s case, a third woman on the U.S. Supreme Court may just provide the “tipping point” that will render the return button inoperable.

ABOVE: Elena Kagan in 2008, during her tenure as dean of Harvard law school. Photo from http://www.flickr.com/photos/hlrecord/4595799520/ Creative Commons Attribution 2.0 Share Alike