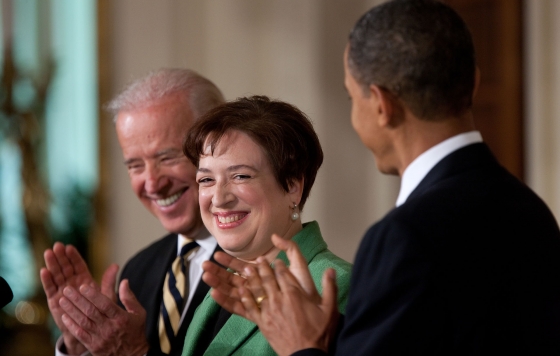 It’s true that Supreme Court confirmation hearings can be vacuous and hollow, as  Elena Kagan herself suggested in 1995. In recent decades, they seem little more than an opportunity for partisan posturing; some have suggested we just cancel the whole thing. But while confirmation hearings tell us little about the nominees, they do reflect the biases and political tenor of America. Elena Kagan’s grilling, like that of Sonia Sotomayor’s, was a stark reminder of how embedded sexism is in our political rhetoric.

Immediately after President Obama announced Kagan’s nomination,  comments and accusations were flung about everything from her looks to her marital status, sexual orientation and reproductive choices.  Though Kagan’s sexuality was never brought up by the Judiciary Committee, it was hinted about in the media, and that’s not unusual.

Day One one of the hearings began with a rather surprising tactic by the Republican members of the Judiciary Committee: They attacked Thurgood Marshall, the first African American Justice and the civil rights giant who successfully argued Brown v. Board of Education. Kagan clerked for Marshall, whom Republican Senators Kyl, Hatch and Sessions attempted to paint as an activist judge. Equally as disturbing as the attempt to rewrite Marshall’s contributions was the attempt to paint Kagan’s ideology as completely inseparable from that of her mentor.  “Influence” can be a perniciously sexist framework, as it strips women of the ability to have independently created ideas and limits their contributions to second-rate copies. While the right’s attempt to paint Kagan and Marshall into the same activist corner was rightly perceived by many as racist,  it also hinted around sexist stereotypes which damage the equality of women’s ideas and contributions.   The line of questioning led Kagan to quip, “If you confirm me to this position, you’ll get Justice Kagan. You won’t get Justice Marshall. And that’s an important thing.”

At Day Two of Kagan’s hearings, Sen. Tom Coburn (R-OK) lectured Kagan about how Americans are “losing freedom” and how we were more free “30 years ago.”  Apparently Coburn, in his zeal to stick to Republican talking points, forgot that Kagan was a woman. So, Sen. Amy Klobuchar (D-MN) reminded him that the “free” society that Coburn eulogized was one in which women were underrepresented.  Indeed, Klobuchar laid the smack down and reminded everyone that 30 years ago there were no women on the Supreme Court, no women on the Judiciary Committee and only one woman in the Senate.  I’m going to call foul on the majority of media outlets for not even reporting this moment.  Instead of focusing on Klobuchar’s poignant reminder, most just reported on Klobuchar’s jokily querying Kagan for her perspective on Twilight heartthrobs Edward and Jacob (FYI, Kagan had no opinion).

Sprinkled throughout the hearing were the kinds of sexism that we have resigned ourselves to expect.  Dahlia Lithwick from Slate tweeted about the number of times Kagan was downgraded from her earned title “Solicitor” to that of  “Miss.” Feminists across the twitosphere complained about the numerous times Kagan was interrupted and about the lines of questioning pursued by the right (but feminists, our wariness of the confirmation process for women has been justified with a study!).

But still, the champions of women’s rights got their say as well.  Marcia Greenberger, President of the National Women’s Law Center, testified about Kagan’s amazing career and the importance  her presence would have for the court:

Kagan will bring to the Supreme Court the commitment to equal justice for ordinary Americans, including the women of this country who often need its protection in ways they never expected.

Above: Kagan in the White House with President Obama and Vice President Biden; in the public domain.