One of the things I love most about the Internet is the way that it allows us to find people with similar interests, no matter where they are on the planet. I was delighted recently to come across a blog by David Dismore on this website in which he discussed some of the American postcards of the women’s suffrage movement. As a UK collector of suffrage postcards I am conscious of the differences in the UK and U.S. cards. In the UK, the number of postcards put out by political organizations (pro and con), such as the Women’s Social and Political Union (WSPU), the Women’s Freedom League (WFL) or the National League for Opposing Women’s Suffrage (NLOWS), was dwarfed by the number of cards produced by commercial publishing companies. On the whole, these commercial cards drew on a tradition of “humor” which was found in the music hall–humor that was pointedly anti-suffrage and often quite misogynistic.

A common depiction of the result of allowing women the vote was the collapse of family roles and care–i.e., the notion that if a woman was not looking after her house, children and husband then chaos would descend. In the card below there is a note from the wife informing her husband that she will be delayed due to an important committee meeting, an event which leads to a domestic crisis as he scalds the cat. The “humor” of this card is, of course, at the expense of both sides: the wife who abandons her responsibilities and the inept husband who cannot cope. 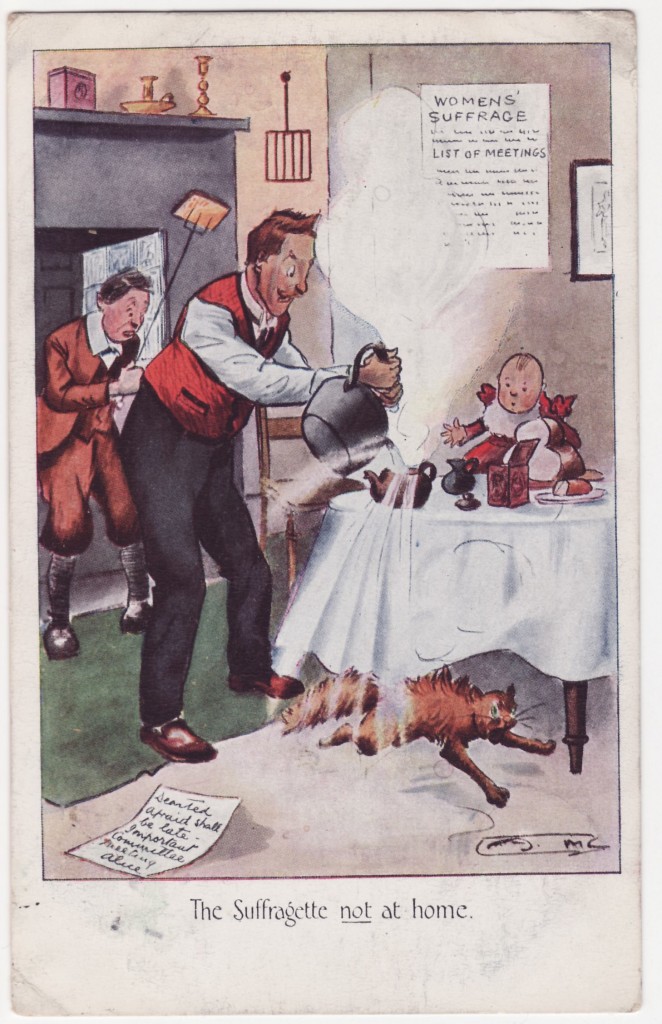 In parallel with suffrage cards in the U.S., UK postcards also represented suffragettes as children, as is seen in this relatively common card in which the judge sentences the naughty suffragette to “two months without chocolate.” 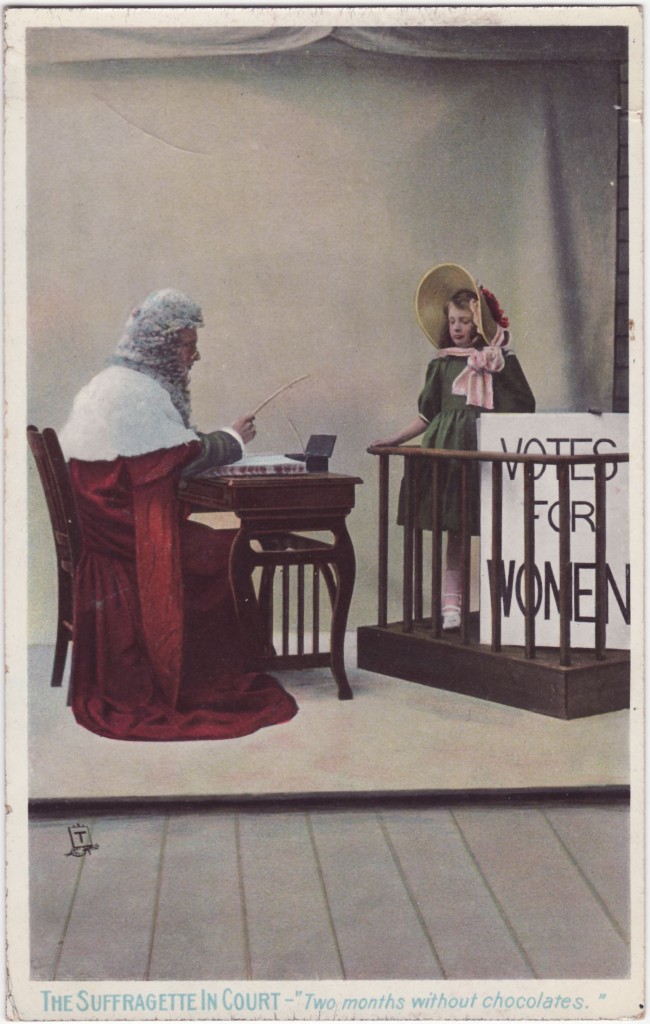 This infantilizing of the women and their cause contrasts with another commercial card which shows a doctor and male prisoner holding a woman down in order to force feed her. 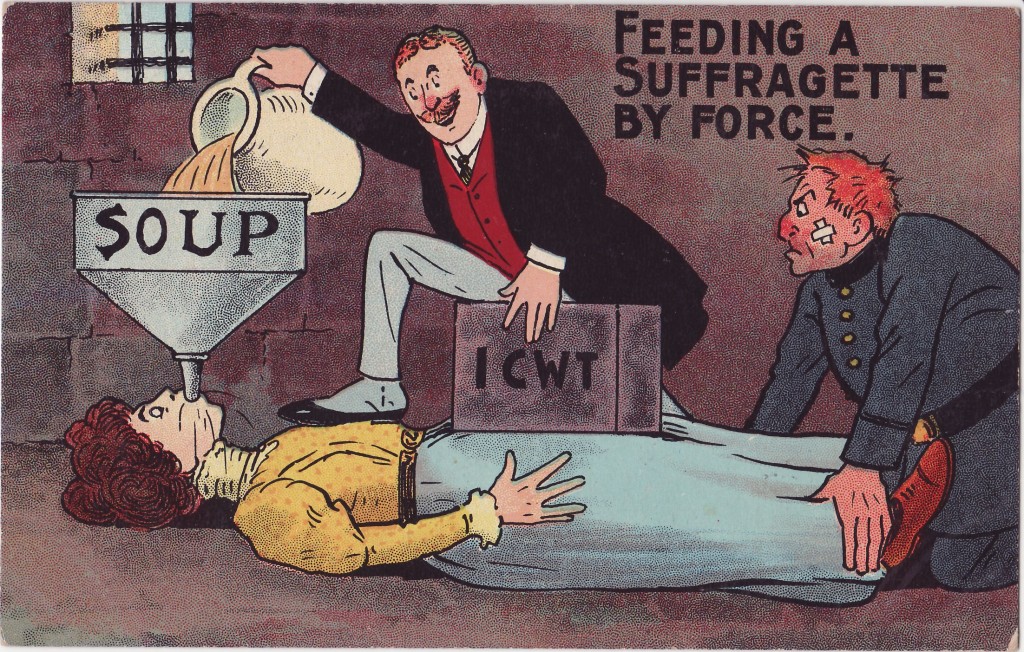 The “humor” of the image stands in stark contrast to the accounts of force feeding which were given by women who underwent this treatment, often many times. It is difficult to ignore the parallel with rape in some of the descriptions. The following is an excerpt of a speech by one woman, Lady Constance Lytton, given on January 31, 1910. Lytton created a false identity in order to expose the differential treatment of working-class women as opposed to women such as herself of higher social standing:

At last they came. It is like describing a hospital scene–and much worse. The doctor and four wardresses came into my cell. I decided to save all my resistance for the actual feeding, and when they pointed to my bed on the floor I lay down, and the doctor did not even feel my pulse. Two wardresses held my hands, one my head. Much as I had heard about this thing, it was infinitely more horrible and more painful than I had expected. The doctor put the steel gag in somewhere on my gums and forced open my mouth till it was yawning wide. As he proceeded to force into my mouth and down the throat a large rubber tube, I felt as though I were being killed; absolute suffocation is the feeling. You feel as though it would never stop. You cannot breathe, and yet you choke. It irritates the throat, it irritates the mucous membrane as it goes down, every second seems an hour, and you think they will never finish pushing it down. After a while the sensation is relieved, then the food is poured down, and then again you choke, and your whole body resists and writhes under the treatment; you are held down, and the process goes on, and, finally, when the vomiting becomes excessive the tube is removed. I forgot what I was in there for, I forgot women, I forgot everything except my own sufferings, and I was completely overcome by them.

What was even worse to me than the thing itself was the positive terror with which I anticipated its renewal.

In the UK, some people fighting for the vote engaged in more violent means of campaigning than in the U.S., although not all groups subscribed to this. The violence was represented in a large number of images. The first card below was released in 1912 by an official anti-suffrage group, National League Opposing Women’s Suffrage. It draws attention to the organized breaking of shop windows. Fighting with the police was a particular favorite of the commercial publishers. This usually involved presenting the suffragettes as either ineffective and hysterical in the face of calm authority (as below) or as enjoying the attention of the male police officers. Reports at the time suggest that this presentation was far from the truth and that sexual assaults on the women by police and the male crowds were ignored by the media. 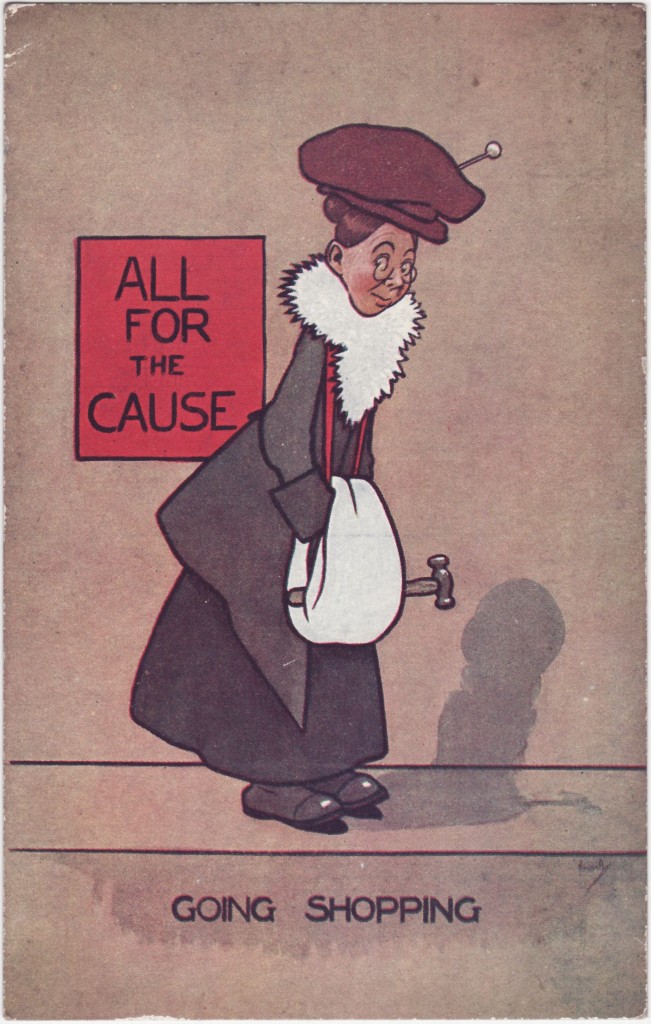 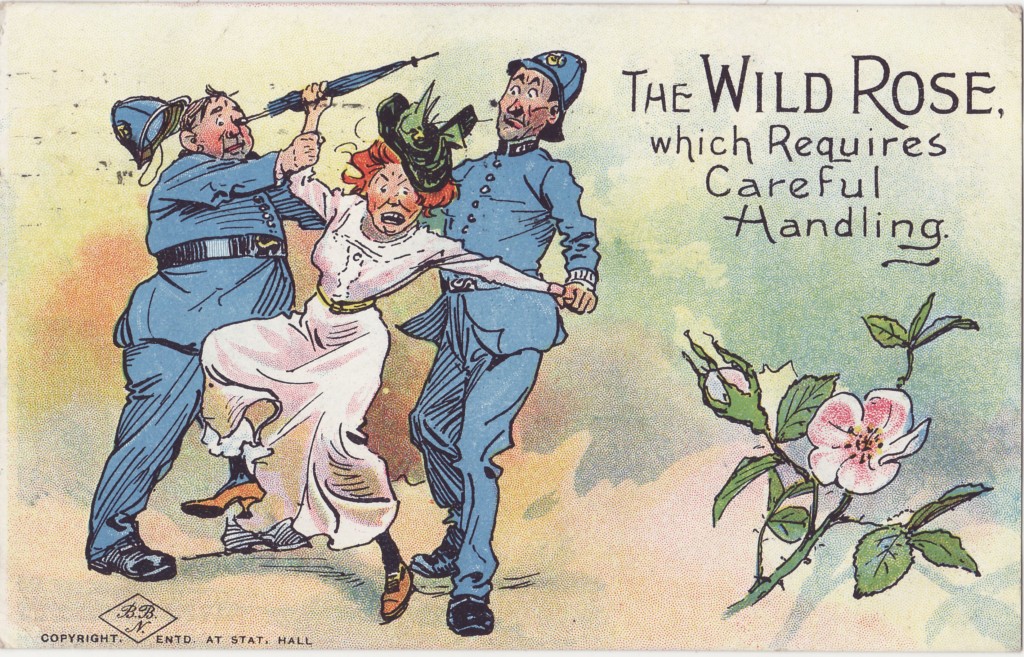 The cards above use a very common UK stereotype of the suffragette as a old maid who is unattractive and unable to get a man. All women who were involved in the feminist cause, not just the militant members, were considered “wild women” and unladylike. Another common stereotype was the hysterical female who would be incapable of using a vote. 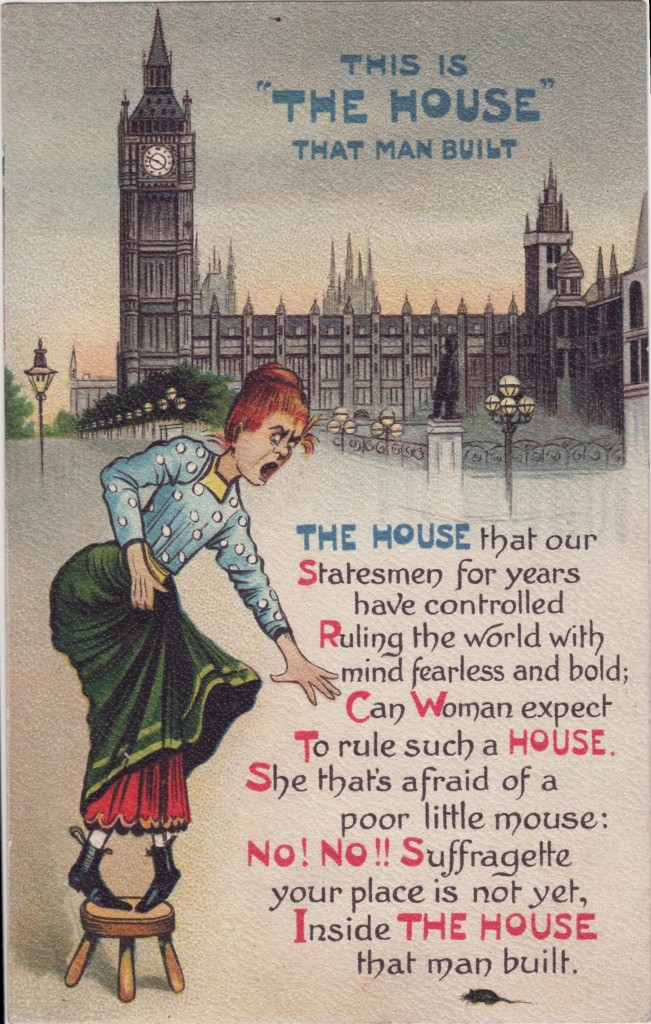 The text on this very popular card (above) in a series by Birn Brothers, London emphasizes the qualities of “mind fearless and bold” that men possess and contrasts those with a woman who is “afraid of a poor little mouse.” The verse uses a children’s nursery rhyme, ‘The house that Jack built,” to focus attention on the Houses of Parliament, the seat of UK political power.

In the UK, postcards related to suffrage are dominated by the commercial, largely antipathetic views of the movement. Their representations of women include the hysterical, the bitter old maids and the irresponsible wife who abandons her family. These stereotypes and images that illustrate them stand in stark contrast to the postcards which were released by the pro-suffrage organizations. On the whole, they did not belittle their opponents or berate the general public, but chose to represent themselves with dignity, their arguments as rationale and their cause as just. The final cards here demonstrate this perfectly, the first showing one campaigner, Edith How Martyn in two images–the gowns of a university lecturer and the garb of a female convict. The second portrays another campaigner, Muriel Matters. Both are simple but powerful visual messages. 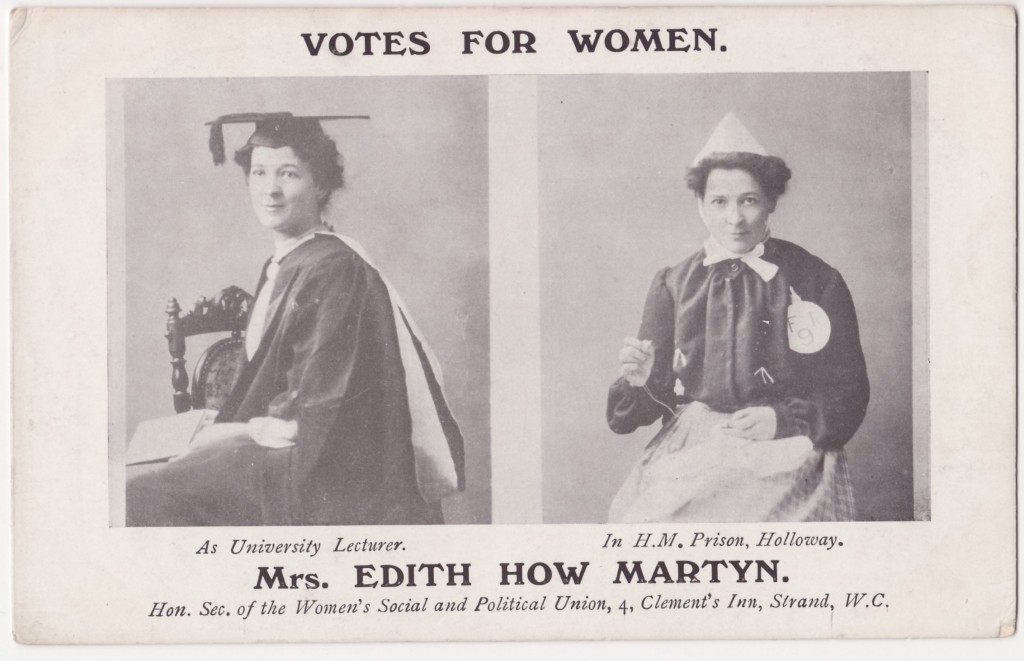