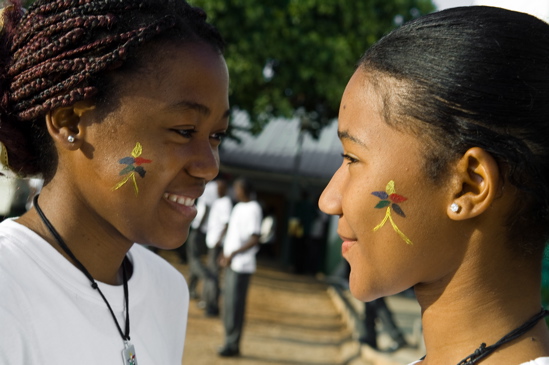 The 2010 World Cup may be over and South Africa out of the global spotlight for the moment, but thanks to Global Girl Media (GGM) the voices and life experiences of South African girls will continue to gain attention.

Timed with the international soccer tournament, which was hosted for the first time on African soil, GGM–an organization that attempts to train a new generation of journalists to produce quality media–worked with underserved girls in Soweto to create videos during the World Cup. They were encouraged to cover their personal experiences growing up in South Africa and their hopes and dreams for themselves, their country and the world. Four young women from Ekasi Women Arts in Soweto, a grantee partner of the Global Fund for Women, participated, and their stories are already opening eyes, ears and hearts.

One powerful video produced by Zandile, a GGM reporter, is about her sister Busi, a lesbian who was gang raped by homophobic males she knew. After the rape, Busi got tested and learned that she had contracted HIV. Zandile captures the deeply personal voices of her family, including the sorrow and anger of her mother. Even though Busi is no longer with them, Zandile was able to preserve the fierce and inspiring spirit of her sister through this moving documentary.

The mini documentaries produced by GGM can now be broadcast via the Internet, cell phones, radio and print media, and also through major media outlets such as ESPN, Al Jazeera and Self magazine. One of GGM’s mentors is Julie Foudy, a former captain of the U.S. women’s soccer team, who supports these “citizen broadcast journalists” as they gain confidence and develop relationships needed for future careers.

GGM is crucial at a time when the Internet and digital technologies are opening a world of possibilities for education, communication and activism on a global scale, yet those technologies are available mainly to those with access and resources. The production of media is often worlds away for most impoverished young women, but making their stories visible goes a long way towards their empowerment. The 2010 World Cup may be over, but for the girls who took part in this training this could be the beginning of a lifetime of opportunities.

Maame is part of the Sub-Saharan Africa Program Team.

Reprinted from Global Fund for Women. All rights reserved.

Photo from Flickr user Star for Life under Creative Commons 2.0.