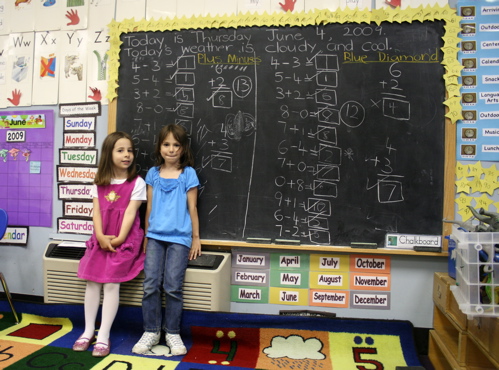 Apparently, when it comes to education in New York, boys are “second class citizens.” Or at least that’s what Christina Hoff Sommers, author of The War Against Boys and the recent article “Are There More Girl Geniuses,” thinks.

Before we start shedding tears for our disadvantaged brothers and sons, let’s take a look at the indicators of such a disparity. The author points to a recent New York Times article that notes girls make up–are you ready?–56 percent of kindergarteners in gifted programs in NYC. Clearly, there is some kind of mastermind behind this giant conspiracy to rid the world of educated men. And while the article does state that some programs have as many as three-fifths girls, it also admits that overall the New York school system is 51 percent male.

And why is this selection process, that leads to such a HUGE disadvantage for guys, completely unfair? Because girls are able to sit through the standardized tests that determine their admittance! They have longer attention spans and better verbal skills than boys (which the author claims the tests are heavy on). So girls do better on the tests and get accepted more frequently.

So, the author seems to imply, standardized testing is an unfair way of determining what students should be selected for gifted programs because they don’t evaluate a child’s intelligence correctly. Unless they prove that boys are more intelligent than girls. Yes, though Hoff Sommers decries standardized testing that “favors” girls, she points to another standardized test as a means of proving that, “A fair selection process should produce more boys than girls in a gifted and talented program.” Yeah. More. Now, why is that? Because one standardized test conducted in Scotland in 1932 showed that while girls had a consistently high level of intelligence, boys were more likely to be off the charts brilliant… as well as more likely to be “mentally deficient.”

So standardized tests are a great way of proving intelligence based on gender. Unless they favor girls.

Much of this article made me want to bang my head against a wall repeatedly. We are expected to worry because after hundreds of years of exclusively educating boys they are no longer the majority of what we consider “gifted” students. Her argument seems to be pretty blatantly sexist. Nowhere in the article did she mention a desire for “equal” educational proportions, but she sure did explicitly mention that it’s only “fair” for boys to be the majority. And girls being the majority? Complete blasphemy.

Also, the author is completely hypocritical about standardized testing. So standardized testing is okay if it proves what you want it to prove (boys are smarter) but when it happens to favor girls then it’s bad? As she states, “the capacity to remain seated for a long test does not reliably measure brilliance, but requiring pre-K children to do it is a sure way of securing more places for girls than boys in a gifted program.”

Hm. Well. It’s just my personal opinion, but I think that one’s verbal skills and ability to concentrate are not completely irrelevant to the educational process and a child’s ability to succeed. I personally think the use of standardized tests is stupid (let’s just say colleges reviewing my SAT math score may wonder if the left half of my brain does, in fact, function). There must be a better way to evaluate five-year-olds (or anyone). But really, you can’t have it both ways: either it’s an adequate determinant of intelligence, or it’s not.

But then, the author’s closing statement really seals the deal:

The developing gender gap in the gifted programs of New York City does not signal that girls are smarter than boys. Rather, it exemplifies how well-intentioned government officials and educators can disregard boys’ needs and abilities and unwittingly adopt policies detrimental to boys’ well-being. It is a small part of the long story of how American boys across the ability spectrum and in all age groups have become second-class citizens in the nation’s schools.

Maybe there is another way of looking at this–one that doesn’t pit the genders against each other. Maybe there are more girls in these classes because those girls actually DESERVE to be in those programs, not because of their gender, but because of their individual intelligence levels.

Here are the facts: out of the world’s 130 million out-of-school youth, 70 percent are girls. Eighty-two million girls in developing countries who are now between the ages of 10 and 17 will be married before their 18th birthdays (obviously interfering with their education). So, maybe instead of worrying about the American boys who can’t get into gifted programs in their schools and have to settle for a regular education, we should be worrying about the millions of girls (and boys) who aren’t able to go to school at all.

Reprinted with permission from The Fbomb.

17-year-old Founder and Editor of the FBomb (http://thefbomb.org) - a blog/community for teenage feminists.