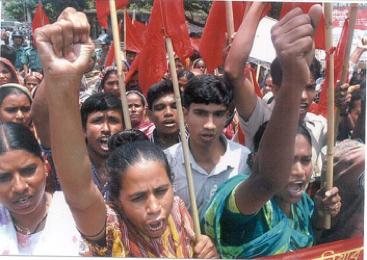 This week, the world’s lowest-paid garment workers get a raise; Israel convicts for rape by deception; women remake Rwanda; the UN finally goes gay; and more.

BANGLADESH: Globalization grows more equitable–slightly–as Bangladeshi garment workers, the lowest-paid garment workers in the world, receive an 80 percent wage increase, from about $25 to about $45 a month. 4,000 Bangladeshi factories employ over 200 million workers, most of whom are women. Many Western companies, including Wal-Mart, Gap, Levi Strauss and Tommy Hilfiger, import from Bangladesh.

ISRAEL: Israel’s political tensions manifest in a romance-turned-rape case: Sabbar Kashur, an Arab resident of Jerusalem, was convicted of rape by deception and sentenced to 18 months in prison. Kashur had consensual sex with a Jewish woman after telling her he was Jewish. The woman filed a rape complaint after learning he’d lied.

RWANDA: Just as the devastation of the First and Second World Wars prompted more women to enter the workforce in the United States and Europe, after the 1994 genocide left Rwanda with a population of 70 percent women, women have become the country’s driving economic force.

THE UN: After a three-year-long battle, the UN finally granted consultative status to the International Gay and Lesbian Human Rights Commission (IGLHR). Now, LGBTQIA NGOs can organize UN events and advise the UN on global issues of sexual orientation and gender identity. The status shift represents a significant step for the UN, which first discussed LGBTQIA rights as recently as December 2008, at the Economic and Social Council.