On the Anniversary of "To Kill a Mockingbird": Going Beyond a "Conversation on Race" - Ms. Magazine
Skip to content 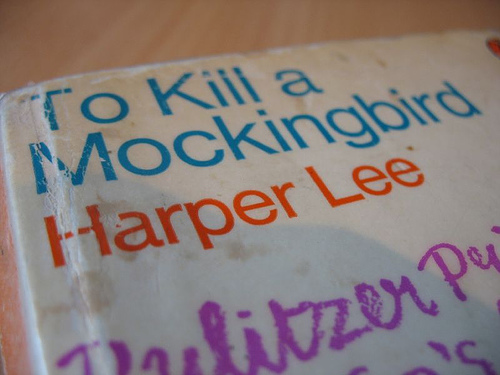 When I sat down last week to start my post about the 50th anniversary of Harper Lee’s Pulitzer Prize-winning novel To Kill a Mockingbird, I was initially going to contest the criticism that Mockingbird has recently endured. But in the midst of my research—rereading Malcolm Gladwell’s critique, Allen Barra’s dismissal of Lee’s book and Jenna Sauer’s defense—I was overtaken by the racially charged events which filled our news cycle.

They began when the NAACP passed a resolution asking the Tea Party to “condemn extremist elements within [it]… [and to] repudiate those in their ranks who use racist language.” Then came the appalling letter written by the former head of the Tea Party Express, Mark Williams. Then, USDA employee Shirley Sherrod was fired over deceitfully edited tapes. This series of events made me radically rethink what I was originally going to write about Mockingbird, much of which would have been centered on Lee herself.

As our own constructions of both race and gender morph, Mockingbird is by no means culturally immutable. Though Lee’s novel bears the mark of its time and place, on rereading the book through the lens of our own racially charged socio-political atmosphere it seems that our national discussion of race is temporally suspended somewhere in the pages of Lee’s novel. This is problematic on so many levels. Firstly, Mockingbird’s handling of race reflects Lee’s regionalism (she was from Alabama, though she wrote the book in New York) and, as Gladwell points out, the failures of Southern liberalism. Secondly, the novel was written for children and thus treats race relationships in their most distilled and simplistic form. As Flannery O’ Connor once quipped, “It’s interesting that all the folks that are buying it don’t know they’re reading a child’s book.”

But it is a child’s book: Its lack of ambiguity and particularly the moralizing dialogue of Atticus Finch fail to address the complexities of racism. At one point in the novel, Scout Finch asks her father if it is all right to hate Hitler. Atticus responds that it is never okay to hate anyone. Atticus, Gladwell argues, strives for equality without questioning his own position of privilege as a white man, and this is a limited and limiting approach. Gladwell criticizes Atticus because his “hearts-and-minds approach is about accommodation, not reform.” Indeed, what makes the character of Atticus so appealing to readers is his moral grandeur. As he says, “I do my best to love everybody.” For Atticus there is good in everyone, and he instructs Scout to …

… learn a simple trick … you’ll get along between with all kinds of folks. You never really understand a person until you consider things from his point of view.

Atticus’ belief in the total redemptive value of everyone reminded me of RNC Chairman Michael Steele’s comments following the NAACP’s resolution.  Steele said:

Recent statements claiming the Tea Party movement is racist are not only destructive, they are not true. Tea Party activists are your mom or dad, your local grocer, banker, hairdresser or doctor. They are a diverse group of passionate Americans who want to ensure that our nation returns to founding principles that honor the Constitution, limit government’s role in our lives and support policies that empower free markets and free enterprise.

Steele’s defense of the Tea Party’s racism is rooted in the same ideology that informs Atticus’ liberalism—though Atticus is the product of the segregated South. Jamelle Bouie at The American Prospect’s blog Tapped responded to Steele’s comments:

One of the most frustrating things about American racial discourse: Too many people understand racism as something ‘bad people’ do. ‘My mom is a great person!  There’s no way she can be racist!’ Racism is the sole province of Klansman or skinheads, and to say otherwise is to insult “good people.” Others have made this point, but this tendency to associate racism with ‘bad people’ is one particularly galling irony of the civil-rights movement… civil-rights leaders scored a tremendous public-relations win but moved the country further away from a real examination of the deep and lasting prejudices that remain part of the nation’s identity. Only certain kinds of people were racists, and the rest of us were fine.

Bouie is right. As most of the outright racism depicted in Mockingbird has disappeared from the American public sphere, “real” racism is a relic seen only in the pages of a 50-year-old novel. But the mythos of our triumph over racism is part and parcel of the foundations of Mockingbird. When Scott and Jem ask Atticus about the Ku Klux Klan’s presence in Alabama, he replies:

Way back about nineteen-twenty there was a Klan, but it was a political organization more than anything. Besides, they couldn’t find anyone to scare. They paraded by Mr. Sam Levy’s house one night, but Sam just stood on his porch and told ’em things had come to a pretty pass. … Sam made ’em so ashamed of themselves they went away.

Atticus does not want to believe in the nefarious presence of the Klan so he lets his children have the mythos—the fantasy that politeness could end discrimination and critically engage with deep-seated prejudices. But of course it can’t. Shirley Sherrod’s own personal story demonstrated that to us. If one watched Sherrod’s entire speech rather than the slanderously edited version produced by Andrew Breitbart, you would have seen her speak about the murder of her father by the Klan and heard the story of her widowed mother standing on her porch with a rifle to fight off the Klan. Sherrod’s father was murdered five years after Lee wrote Mockingbird, and certainly Atticus’ myth of the Klan was far different than Sherrod’s reality.

I had always assumed that Atticus’ speeches were representative of the “old” South and that Scout’s understanding was that of a child’s–that she would grow up and realize that what her father told her were, in fact, myths. I interpreted Scout’s relationship with her father as a metaphor for generations of Southerners who would learn from the shortcomings of their parents’ ideologies and attempt to find a more honest approach to deconstructing racism. When I first read the book in fifth grade it was a watershed moment, because it was the first time that the injustices of discrimination were laid before me in the black and white of a book’s page. But that’s because, like Lee, I am an upper-middle-class woman from the South.

But I assumed, wrongly perhaps, that Mockingbird was a springboard to a deeper discussion of what racism actually is and how/why it functions. That doesn’t seem to be happening, as evidenced by the media’s response to the NAACP’s resolution and Sherrod’s treatment. It seems that our national discourse about privilege, race and racism is suspended in a permanent state of “Scout.” That is to say, we still believe the childhood mythos that “racism as something ‘bad people’ do.” For us to recognize racism, it must be epic, dramatic or even literary. The realities of daily racism, like the mock letter written by Tea Party leader Mark Williams, are minimized as “not racist” because we know, and maybe even love, people who share his political beliefs and, well, they can’t be bad people. They are, as Steele said, our mothers and our fathers.

Since then many have called for a “national conversation on race,” but I think a simple conversation would place us in an Atticus Finch-like situation where there is grand moralizing and oration but not much content. But neither Harper Lee nor Atticus Finch should have the last word on race. Ta-Nehisi Coates is right to suggest:

Put bluntly, this is a country too ignorant of itself to grapple with race in any serious way. The very nomenclature–“conversation on race”–betrays the unseriousness of the thing by communicating the sense that race can be boxed from the broader American narrative. … Talk is overrated. There can be no talk with people who’ve conditioned themselves out of listening. This is the country we’ve made. This is the country we deserve.

Perhaps this is due, in part, to the popularity of To Kill a Mockingbird. In 1988, a report by the National Council Teachers of English found that it was required reading in three-quarters of America’s high schools. But it’s time to move beyond Harper Lee’s approach to race, because she was a woman reared in the segregated south. Racism seems to lurk at the edges of all our political debates right now, and as injustices persist we pull an Atticus Finch and persuade ourselves into accepting them. Or, as Tasha wrote on Feministe in the wake of the Tea Party’s response to the NAACP: