In '12th and Delaware,' A Glimpse at CPC Tactics - Ms. Magazine
Skip to content 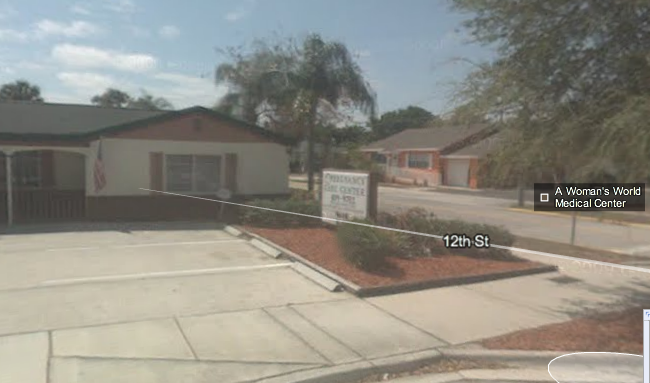 From the makers of the terrifying Jesus Camp, which went inside an evangelical  summer camp, comes an equally chilling documentary exploring the abortion debate as it plays out on a single street corner in Fort Pierce, Florida. 12th and Delaware, which debuted on HBO last night, follows the goings-on at A Woman’s World Medical Center, an abortion clinic, and the Pregnancy Care Center, a Christian anti-choice Crisis Pregnancy Center (CPC) across the street. Directors/Producers Heidi Ewing and Rachel Grady place audiences smack in the middle of the battle between anti-choice protesters and clinic staff.

Ewing and Grady said they aimed to make the film both impartial and observational, giving both sides a voice and leaving viewers to draw their own conclusions.

But for someone with any common sense, it’s quickly obvious the CPC’s “counseling” services are problematic. Director Anne gives horrific advice to a pregnant woman seeking help: After the woman admits that the father of her child verbally abuses her, Anne suggests, “Maybe the baby will change him.”

Meanwhile, her training of CPC “counselors” is a study in manipulation. Anne tells them:

Attract the client. Hook her right away. Engage her in conversation…I’m not trying to talk her out of it. I’m trying to get her in the door. There’s no deceit in this.

The filmmakers took the same neutral approach with Jesus Camp, and the camp leader, Becky Fischer, praised the film and thought it more or less an accurate portrayal. Anne’s reaction to 12th and Delaware, however, was less than positive. The Center purchased the domain www.12thanddelaware.org to dispute how it was depicted. Anne reflected:

Apparently, Anne was disappointed that the filmmakers even included footage of the abortion clinic. The Pregnancy Care Center, along with many other CPCs in the U.S., convinces women to believe it is a legitimate clinic. (The cities of Austin and Baltimore have passed ordinances requiring CPCs to post signs saying they don’t perform or refer clients to abortion or birth control services.)

One drawback of the filmmakers’ neutral approach is that the film fails to provide authoritative abortion information. It captures the falsities CPCs commonly tell women–that surgical abortions can kill you, that abortions lead to breast cancer, and that condoms don’t work, among others–but doesn’t overtly debunk them. The brochures and literature are refuted by Candace, a worker at A Woman’s World, but she is portrayed as “the other side,” and not as an expert on the subject. By not choosing sides, the filmmakers leave room for someone uninformed about abortion to believe the CPC’s misinformation.

Ewing and Grady said they wanted to give a voice to women making the decision to either abort or have a baby, and the film does that, featuring women who come for services at both facilities. But it also leaves the viewer longing for followup on what happened to the women featured; did they have an abortion or not? How did they feel after having an abortion or giving birth?

Yet 12th and Delaware is still valuable as a real, up-close snapshot of what goes on daily at CPCs and abortion clinics.

Above: Pregnancy Care Center in the foreground and A Woman’s World in the background, at the corner of 12th and Delaware in Fort Pierce, Florida. Photo courtesy of googlemaps.com.