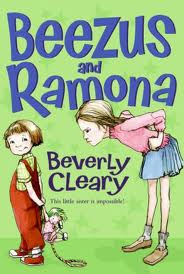 Natalie (mom): Though I was suspicious that the latest children’s book-to-film adaptation would be a fluffy disappointment, I was pleasantly surprised by Ramona and Beezus. Many other reviewers, however, don’t share this view. Dawn Taylor at Cinematical argues the film “feels a little …off,” is “so limp,”  and drips with “maudlin sentimentality.” Arguing that the film is “less sloppy than it is careless, a big soft pillow of a movie that comfortably squishes around the viewer without form or intent,” Taylor derides the very thing I liked: the fact that the film showcases the “sentimental” relationship between women without intently focusing on what so many films do–pairing up every woman with a man.

Naomi (11-year-old daughter): Yes, in a typical movie (with a girl main character), the girl would find her true love (a boy!)–as with any princess movie, pretty much. But in Ramona and Beezus they focused on the relationship between the sisters. Beezus was portrayed as a loving sister and a responsible girl, as when she is able to put out the kitchen fire started by Ramona.

Natalie:  I liked Beezus, too. But, according to Taylor, “Beezus, as played by, [Selena] Gomez, is a lovely, fully-formed teenager with perpetually, perfectly glossed lips.” To be fair, as you say, Naomi, she is also a caring sister exuding realistic extremes of frustration and love for her “pest” of a little-sis, Ramona.

Naomi: I didn’t find Ramona [played by Joey King] to be as much of a “pest” as she is in the books–in the book version, her character she is angrier and gets in more trouble. In both the books and the film though, her character is spunky and fun. She reminds me of Nim of Nim’s Island, another great girl character.

Natalie: Michelle Orange of Movieline argues that the film is a “a rummage sale of a family movie” that is “innocuous, well-groomed, and buttery, buttery sweet.” She adds,

Watching Ramona … feels like being bound in a thick, homemade quilt, rolled up to a campfire, and smothered in toasted marshmallow goo.

Orange, like Taylor, derides the sentimental, feeling-focused narrative. Or, in other words, these critics disparage those aspects of the film that are associated with femininity and “chick flicks.” What is so wrong with basing a film on emotion–and further, on emotion not linked to romance, but to sibling rivalry, middle-child syndrome, family troubles and the fear of growing up?

At least one reviewer liked this emotional focus, Glenn Whipp of the Los Angeles Times:

We watch the sisters forge not only a truce but also an understanding of each other as young women negotiating their way through the thickets of childhood. Tenderness isn’t a quality found much these days in the whirring-and-clanging busyness of family movies, which makes this G-rated gem’s emphasis on emotion and heart all the more laudable.

Naomi: I liked the focus on emotion. It made me cry in parts and laugh in others. I really also liked the way the film focused on the sister’s relationship, and how Ramona was able to bring out the silly side in Beezus. I also liked how it showed the sisters needing and helping each other when Picky Picky (the cat) died. But I don’t think it was too syrupy–the film showed Ramona was jealous of her sister and felt like everyone loved Beezus the most. It also indicates that even though Ramona is brave, she needs assurance from Beezus that everything is going to be OK when their dad loses his job.

Natalie: Yes, and I liked how Ramona proclaims at the beginning of the film that she has an “overactive imagination.” I liked the way the film depicted this via the incorporation of animated sequences and her love of making up words like “terrifical.”

Naomi: There were also other good woman characters, such as Aunt Bea [played by Ginnifer Goodwin]. She was portrayed as independent and not “needing” a man. Even though she marries Hobart [Josh Duhamel], she clearly stated she could live and be happy alone without a man in her life and refused to be “reeled in.” Also, it was clear that she and Hobart were equals and she expected him to change from his “high school ways.” I also liked how the mother supported the family when the dad lost his job and how there was a woman priest performing the marriage ceremony.

Natalie: Good points. It’s rare to see so many strong women front and center. As Amy Biancolli notes in her review,

Indeed, not all that many books and movies with such strong, quirky women characters have been penned since Beverly Cleary started her series in the 1950s.

Naomi: Yeah, and even the way they portrayed the dad was unique. He was loving and caring and dealt with problems using humor and art rather than by getting angry or being bossy. He was good at keeping the household up and running. Not only moms can do that, dads can too!

Natalie:  The film also did a good job of showing Ramona’s creativity–a nice relief from the usual portrayal of young girls only caring about their looks, shopping, and/or boys.

Naomi: Yes and it was neat how they had that conversation near the end where Beezus assures Ramona that “being different is good.” Ramona’s troubles with trying to fit in showed the pressure kids can feel at school to be like everyone else. I like how Ramona was proud of her difference and that others appreciated her for this.

Natalie: Yes, the movie passes the Bechdel Test with flying colors, showing touchingly and realistically the relationships between sisters (Ramona and Beezus as well as Dorothy Quimby [Bridget Moynahan] and Aunt Bea), between mothers and daughters, and between teacher and child. And all these women talk about so much more than boys. Allejulah!

ABOVE: Cover of Beezus and Ramona, image courtesy of Wild About Movies