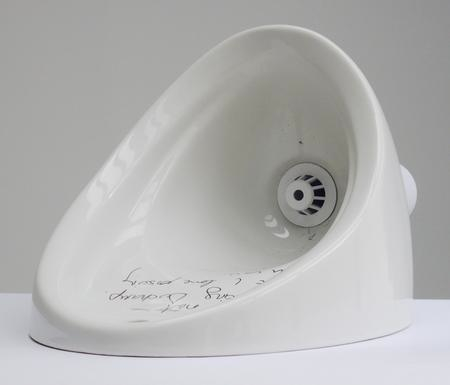 Amid all of Lady Gaga’s gender-bending and hot topic love affairs (most recently, her Phoenix concert appearance in which she bore writing on her body in protest of AZ SB1070), a work of art was madefound. I mean, made. Found…well, here it is:

In an act of art historical savviness, Lady Gaga has again aligned herself with a historical figure–Marcel Duchamp. For anyone that is not familiar with the Dadaist object, known as Fountain (1917)–let me recap:

What has Gaga added to the almost century-old dialogue about art? How does it relate to our culture in 2010? In her latest work, a collaborative piece now on display at the London art space SHOWstudio, she inscribed this note to the public: “I’m not fucking Duchamp but I love pissing with you.”

Based on her inscription, she is not trying to outdo Duchamp but she gets the joke. Yet, the comparison remains. Perhaps a better question would be, “How has her appropriation disrupted our notion of her, Duchamp, or art?” To begin with, consider this quote on the SHOWstudio.com site, which explains her version of Duchamp’s statement: “Rather than embodied in the physicality of the piece itself, the reference to the Inside/Out theme comes from Lady Gaga’s ‘marking’ of said urinal with traces of herself.” 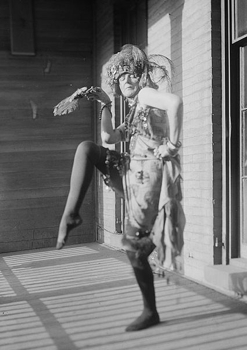 She also adjusted the title of the work to Armitage Shanks. And then it occurred to me in a conversation with a great friend–Gaga’s tendency to perform the monstrous parallels that of another woman who made a few people nervous and whom many believe is the artist behind Fountain–-the Baroness Elsa von Freytag-Lorinhoven. While Gaga essentially marked her territory with piss, Man Ray, a staunch Surrealist, declared the Baroness to personify the “’shit’ of Dada” in anticipation of her arrival in New York in 1921. How rude!

The woman’s (and more broadly, the non-White man’s) presence in works of art tends to rest in the world of objects, not artists.We talk about Duchamp all the time but we don’t hear much about the Baroness, who wasn’t fully respected as an artist but was a popular model for many artists. Despite the gender divide, she produced art, poetry, garments, and performed like hell. Today, it’s clear that while she was a fixture among the Dadaists, she tends to be a footnote in Dadaist studies. More recently, feminist scholars have helped to articulate her role in the largely masculinized canon. Frida Kahlo is another prominent artist whose persona is only beginning to be understood beyond the gendered language of Surrealism.

I’m sure that Duchamp would be tickled by Gaga’s act but is this all that she had hoped to suggest? Most certainly not–a dead audience cannot be persuaded, and anyone who has dubbed herself a fame monster would know that.

So why reinvent the wheel urinal?

Davin Heckman pointed out the gendered “essence” of a urinal in his essay about Duchamp’s work:

A urinal has a specific use when it is placed in the bathroom, but outside of the bathroom it confounds. It invites the male viewer to participate in a strange way. Traditional high art, the nude especially, is often criticized for being for a male audience, and this piece calls attention to that. But unlike nudes, which are often criticized for seeking to engage the male viewer with sexual imagery, this seeks to do so without it. A urinal requires the male to instead expose himself and to have another type of relation altogether. A urinal is a place to urinate while art is something to adore. To pee on art would be a sacrilege, and this is what Duchamp has done by creating his peon art.

The male audience is “confounded” but what about the rest of the audience? How does it engage women? By “making” Armitage Shanks, Gaga’s implied usage of the urinal explicitly refutes the intended purpose–in doing so, high art is queered.

Lady Gaga’s artistic check mate may be a stroke of good luck. Lately, she’s been exalted by many while others have questioned her own readymade status as a copycat. Whatever the case, it’s a humorous and (still) rare interruption in a largely separatist art history.

The 21st century condition suffers from high-speed internet with a short-term memory–another fin de siècle. It’s part of the reason that we seem to shrug everything off because “it’s been done already”–no need to reconsider it. In turn, history is repeating itself while the early Modernists’ legacy continues to define our associations.

A possible solution? Make more art, promote it until it blends into the rest of the visual tapestry, keep language in mind, and see what happens.

For more information about the Baroness and her role in the Dadaist movement, read Irrational Modernism: A Neurasthenic History of New York Dada by Amelia Jones.

Cross-posted from Gender Across Borders