What Has Feminists Seeing Red? - Ms. Magazine
Skip to content 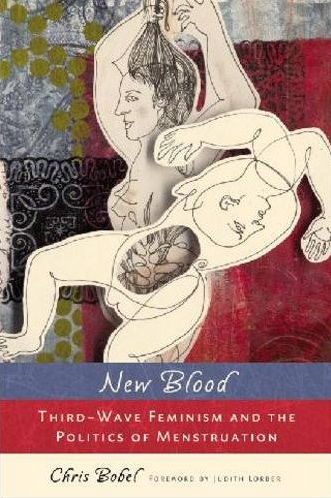 I had the pleasure of conversing with Chris Bobel, Ph.D. about her new book, New Blood, which deftly tackles a taboo topic: feminism and menstruation.

Ms./Adina Nack: You explore new feminist activism that focuses on menstruation. Historically, how have feminists viewed menstruation, and why is menstrual activism important now?

Chris Bobel, Ph.D.: The issue of menstruation has not been a top feminist priority, though, since at least the 1970s, a few bold feminists have reckoned with the socio-cultural and political dimensions of the menstrual cycle. I argue that the menstrual taboo—which impacts us all, even feminists—often puts the issue off-limits. In mainstream culture, the only menstrual discourse that gets any play is making fun of women with PMS. I studied menstrual activists who want to widen and complicate the conversation. Menstrual activism is part of an enduring project of loosening the social control of women’s bodies, moving women’s bodies from object to subject status—something absolutely foundational to addressing a range of feminist issues, from human trafficking to eating disorders to sexual assault.

Ms.: What do you think of Kotex’s new ad campaign “Break the Cycle,” which lampoons traditional menstrual product ads?

Bobel: The new campaign could be a game changer, but I’m doubtful. First, the campaign only works as long as the menstrual taboo persists, otherwise their frank talk doesn’t stand out, does it? While I can join in the joke of the industry poking fun at itself –and I love the message of “no more shame”—in the end, it’s the same, just repackaged. Second, I resent this campaign for exploiting shame to sell products for nearly a century and then exploiting THEIR overdue pronouncement–“enough with the euphemisms, and get over it”—to sell a product. Also, you’ve got to wonder if not only Kotex but their whole industry is now pulling out all the stops to try to hold onto its market share as menstrual suppression drugs –like Seasonique and Lybrel—are gaining interest.

Ms.: So, what do you think of pharmaceutical industry arguments that support these menstrual suppressants?

Bobel: Their quasi-feminist arguments co-opt feminism to push drugs. Big Pharma is marketing suppression as a ‘lifestyle choice’ but what most don’t realize is that “menstrual suppression” is actually cycle-stopping contraception that does not only reduce or eliminate menstrual bleeding but also suppresses the complex hormonal interplay of the menstrual cycle. We don’t yet have adequate data to really show if this is a safe long-term practice for otherwise healthy women. Check out this position statement by the Society for Menstrual Cycle Research. Furthermore, ad campaigns represent the menstrual cycle as abnormal, obsolete, and even unhealthy. These messages underscore that women’s natural functions are defective, dysfunctional and in need of medical intervention. This can lead to negative body image, especially in young women. How is this feminist? ‘Choice’ without good, fact-based information based on thorough medical studies isn’t real choice, and a campaign that exploits women’s negative attitudes about their bodies isn’t feminist either.

Ms.: Your work uses menstrual activism as an analytical lens through which to view continuity and change in the women’s movement, from what some call the “second wave” of feminism through the “third wave”. So, given that the “wave” distinctions are not without controversy among feminists, what do you see as setting third wave feminism apart? Is it truly unique, or is it merely a label that recognizes the next generation?

Bobel: There’s a lot of continuity between the waves—mostly in the tactical sense. Today’s feminist blogs are yesterday’s zines, which reflect earlier mimeographed manifestos; radical cheerleading recalls street theater and public protests, like early second-wavers at the 1969 Miss America pageant. Second-wavers practiced what third-wavers call DIY (Do It Yourself) health care when they modeled pelvic self exams. But most third-wavers depart from most (but not all) second-wavers by troubling the gender binary. For example, the radical wing of the menstrual activism movement refers to “menstruators,” instead of assuming that everyone who menstruates gender-identifies as a woman.

Ms.: Tell me more about that!

Bobel: Most assume that a female-bodied person, with breasts and a vulva, is a woman, and usually that’s true. We also assume that menstruation is a near-universal experience for women. Radical menstruation activists question these assumptions. Menstruation is not and has never been EVERY woman’s experience. Women don’t menstruate for lots of reasons, and they don’t menstruate their whole lives. Also, some transmen and intersex people DO menstruate. So equating menstruation with womanhood is problematic. Saying “menstruators” makes room for more people, more experiences. This linguistic move is boundary smashing, inclusion-in-action and bodes well for feminism’s future.

Ms.: But, you’ve written that menstrual activists are not successful at all attempts at inclusion.

Bobel: The first face of the feminist movement may have been white and middle class, but poor white women and women of color across the class spectrum have always been there, often toiling in relative obscurity. This could be the case with menstrual activism, too. However, I’m a white, privileged academic, and this biases my world view. I looked for women of color doing this work and found a few. But, was I looking in the right places? Was I using the right language? One activist of color said that I was likely missing Black women because I wasn’t clarifying how race and gender intersect in menstrual health. Also, menstrual activism is risky business for all, but especially for women of color, whose bodies have been denigrated throughout history. Taking on the menstrual taboo can make others see you as nasty, gross, improper…and if you’re already struggling to be accepted and taken seriously, then why go “there”?

Ms.: Well, I and many other women’s health activists appreciate that you “went there”!

For more on this topic and her research, check out Chris’s new book – New Blood: Third-Wave Feminism and the Politics of Menstruation (Rutgers University Press, 2010), previewed in the Our Bodies, Ourselves blog and in a provocative article in The Guardian last fall.

This is cross-posted at Girl w/Pen.