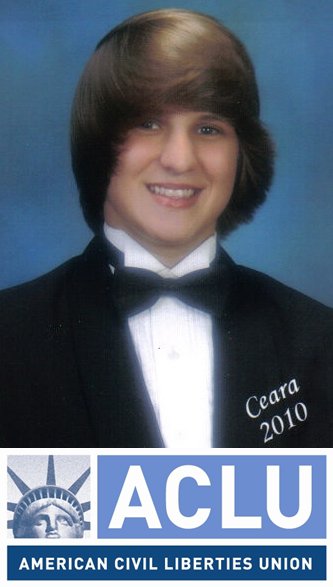 A Mississippi school cut student Ceara Sturgis out of her yearbook’s “senior photos” section because she wore a tuxedo, rather than a dress, in her photo. Now, the ACLU is suing the school for gender discrimination.

According to the ACLU’s Blog of Rights:

Ceara, who’s worn boys’ clothes all her life, tried posing with the drape [designed to look like a dress], but felt extremely uncomfortable and had her mother request that she wear the tuxedo instead. The yearbook photographer permitted Ceara to wear a tux. But after the portrait was taken, the principal told Ceara that he would not allow the photo to be published. Despite efforts to resolve the issue by Ceara’s mother and the ACLU, Ceara received her yearbook without her portrait, or even her name, included in the senior class portrait section.

Apparently, Sturgis was pictured in other sections of the yearbook, but the situation still reeks of homophobia.

The ACLU’s lawsuit states that Sturgis’ rights “were violated under Title IX, which prohibits discrimination based on sex and sex stereotypes, and the 14th Amendment’s guarantee of equal protection.”

This comes just months after the ACLU sued a different Mississippi school for canceling its prom rather than allowing Constance McMillen to attend with her girlfriend.

To help Sturgis and students like her, join the Facebook support page and send a message to your legislators urging them to sign the Student Non-Discrimination Act.

Above: Sturgis’ senior portrait. Photo courtesy of Ceara Sturgis and the ACLU.