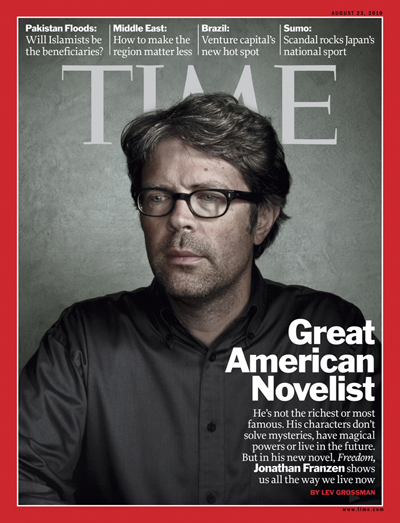 Time‘s recent declaration of the obscure and notoriously media-shy writer Jonathan Franzen as our “Great American Novelist” was met, at first anyway, with shocking equanimity, it seems to me. Sure, he has a new book, Freedom, coming out. Sure, Sam Tanenhaus declared said novel a “masterpiece of American fiction” in the New York Times, though he did so nearly a month before regular readers would be able to challenge that view. Sure, such is the confidence of Farrar, Strauss, and Giroux in this book that it is pre-selling as an ebook at the unusually-high price of $14.99. Me, I read The Corrections, enjoyed it, and promptly forgot about it. I haven’t read the new book. (It’s not out until August 31st.) But really, we’re still doing the thing where we elevate a fiction-writing white men as the Greatest Thing In American Writing Today? And not blushing a little when we do this?

A writer friend to whom I was recently talking—okay, complaining—about this, noted that probably people were just resigned to the praise he’s getting because of the inevitability of the anointment, or the fact that in many ways it had already happened. Critics have always loved Franzen’s work. (Also, this writer friend said: “Franzen’s the guy who wants it the most, isn’t he?”)

But of late I’ve had company in my objections, anyway. The novelists Jodi Picoult and Jennifer Weiner began complaining on Twitter last week that the Times only liked books by “white men from Brooklyn,” starting the hashtag on Twitter #Franzenfreude, by means of which people could recommend good and, one supposes, comparatively obscure novels by women.

Both Picoult and Weiner are the kind of writers who, to use Saul Bellow’s phrase, are free to stuff their ears with money if they don’t like what they’re hearing about their own books. And while I hadn’t time to look up every interview they’ve ever given, I have a hard time believing that in their heart of hearts, they envision themselves as even writing literary fiction, or at least that they aim their work at the same critical audience Franzen does. (Would Franzen’s website have as a title “Novels About Family, Relationships, and Love”?) So I think it’s overbroad to claim that they are themselves being treated differently solely as women, in this instance.

And yet, they do have a point. And it’s a point that brings us right up to the edge of the precipice of having to re-evaluate what it is we think is worthwhile about literature, and why it might not be what current standards say it is.

There are a number of levels on which one can analyze this problem of literary merit. Only the first and most superficial is markets. From that perspective, this entire discussion is little more than wankery. First of all, not a day goes by where we’re not being reminded by publishers that the collapse in transaction costs related to publishing writing (thanks in no small part to websites like this here fine publication) is absolutely destroying traditional publishing. Whatever the former gatekeepers to literary fame think, in short, is becoming more irrelevant by the day, because if they don’t like what you’re writing, you’re perfectly welcome to self-publish (or to work with a progressive change publisher) and potentially earn a higher income, proportionate to sales anyway, than you would have if you’d signed with a major publishing house, by cutting out the middleman.

Furthermore, as Lorin Stein notes over at Ta-Nehisi Coates’ blog, if we’re gonna get all statistical about it, women in particular consume fiction at a much higher rate than men, at least today. (I’ve got no more than anecdotal evidence to back this up but it seems, if Jane Austen was accurately reporting her era, women have been the prime consumers of novels for quite some time.) That fact is often held up to explain why writers like Picoult and Weiner are so successful, but it bears mentioning that women consume a lot of what might be called “serious fiction.”

Thus, to the extent that we’re talking about how fiction sells, the whole issue of whether book critics are biased towards white men is sort of a wash. I don’t wish to overstate that, of course. There are undoubtedly some black/female/gay/etc. literary fiction writers who have never made big sales as a result of bias. The main justification for the continuance of highbrow book reviews might indeed be their role as a marketing engine for literary fiction. But such reviews have never driven the market as a whole.

But let’s get beyond money. And also beyond the mere ego stroke of getting praise in a good review. Writing, at least of the kind you don’t bury on your hard drive, is a communicative act. It wants to be read. It is at least partially motivated by hope that your work will be grappled with by other people who take the subject as seriously as you yourself do. So when you are a lady writer, or an African American writer (sometimes you are both, whee!) and you write something, and it is met with silence by those you see yourself as writing to, or, perhaps worse, a shrug or faint praise, well, that does seem to undermine your project. It makes you feel like your voice is worth less than someone else’s. It makes you wonder if you should bother to keep speaking at all. Perhaps that cri de coeur doesn’t garner much sympathy in an age where everyone’s getting fired from soul-destroying day jobs they nonetheless desperately needed for the health insurance. But it doesn’t make it less sincerely felt.

And the silencing and devaluing of those voices has consequences, particularly when it tends to happen disproportionately to certain populations. What is praised today may very well make it into “the canon,” might very well be on some future high school syllabus, will shape somebody’s imagination, In a post I didn’t much otherwise like, because it’s appalling that in this day and age you can be engaged with the production of literary fiction and still evince innocent surprise that women are actually writing novels worth reading, Chris Jackson of Spiegel & Grau pointed readers to the Nigerian writer Chimamanda Ngozi Adichie’s speech at last fall’s TED, called “The Danger of A Single Story.”

You should watch it, she’ll put it more eloquently than I can, but one of her main points may be briefly stated as follows: when your canonical literature speaks only to one experience—the “single story”—it actually, in a very real way, begins to limit people’s imaginations, and limits the kinds of experience literature can and should expose you to. “Power is the ability not just to tell the story of another person,” she says, around the 10-minute mark, “but to make it the definitive story of that person.”

Which brings us to the question of why praise does tend to aggregate around white men, still, in a way that it doesn’t for other kinds of people. I obviously don’t think that Tanenhaus, and Michiko Kakutani (not precisely a white guy herself) sit around their little cubicles by the atrium plotting how they’re gonna keep women and people of color (and trans people!) out of the halls of literary power. As in most cases where social prejudice is really firmly entrenched, there is no Man Behind the Curtain. Otherwise, this would be a simple issue to solve: we could just fire the people in cubicles like theirs, and sexism and racism, and transmisogyny and ableism and every kind of unfairness under the sun would be over.

But life isn’t like that. Instead of men in rooms we have timeworn, and as such unquestioned, ways of thinking and evaluating.

So let’s look at the phrases that have been used to justify the effusive levels of praise being directed at Franzen. Tanenhaus, for example, says that Franzen’s book was great because it spoke to “our shared millennial life.” Grossman, the Time critic, admires the way Franzen “remains a devotee of the wide shot, the all-embracing, way-we-live-now novel.” Even the Brits agree that Franzen has tapped into some kind of shared experience psyche: the Guardian called The Corrections “a report from the frontline of American culture.”

It seems a fair question, in that context, to ask: “What’s this ‘we,’ white man?” Keep reading.

Excerpted from The Awl. Michelle Dean has written for Bitch and The American Prospect. She blogs at The Pursuit of Harpyness.

Above: Cover of August 23, 2010 Issue of TIME, courtesy of Flickr user Wolf Gang under Creative Commons 2.0.