What's in a Name? For "Ms.," a Long History - Ms. Magazine
Skip to content 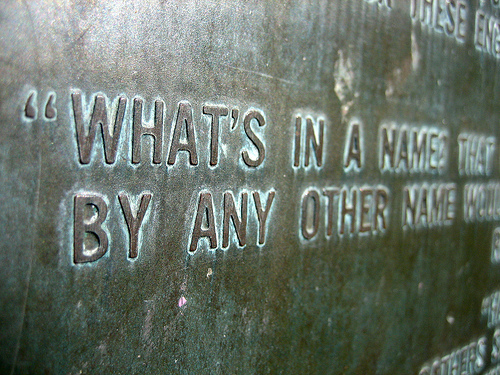 Ever since Ms. emerged as a marriage-neutral alternative to Miss and Mrs. in the 1970s, linguists have been trying to trace the origins of this new honorific.

It turns out that Ms. is not so new after all. The form goes back at least to the 1760s, when it served as an abbreviation for Mistress (remember Shakespeare’s Mistress Quickly?) and for Miss, already a shortened form of Mistress, which was also sometimes spelled Mis. The few early instances of Ms. carried no particular information about matrimonial status (it was used for single or for married women) and no political statement about gender equality. Eventually Miss and Mrs. emerged as the standard honorifics for women, just as Mr. was used for men (Master, from which Mr. derives, was often used for boys, though it’s not common today). While Miss was often prefixed to the names of unmarried women or used for young women or girls, it could also refer to married women. And Mrs., typically reserved for married women, did not always signal marital status (for example, widows and divorced women often continued to use Mrs.). The spread of Ms. over the past forty years both simplifies and complicates the title paradigm.

To complicate things even further, the headline writer at the Milwaukee Sentinel (1898) uses Ms. as a further shortening of Mrs. Ms. Carter in the headline is Mrs. Leslie Carter in the story. (Broadway and silent film star Caroline Carter, called “the American Bernhardt,” kept her Chicago socialite husband’s name as her stage name, Mrs. Leslie Carter, after a scandalous 1889 divorce.)

Ms. didn’t really take off until the politically-motivated language reforms of second-wave feminism and the cultural impact of Ms. Magazine in the 1970s. Many of the form’s popularizers at that time thought of Ms. as a blend of Miss and Mrs., but some evidence suggests that it derives more directly from Miss, or possibly from Mistress. It may have come from all of these, at different times. The 1885 citation from the Vermont Watchman, which has just come to light, provides a new link in the development of Ms. This newspaper ad, masquerading as a news story, contrasts Ms. Parrtington with Mrs. Dull, suggesting that Ms. is meant to abbreviate Miss.

The earliest example of Ms. found so far is on the tombstone of Ms. Sarah Spooner, who died in Plymouth, Massachusetts, in 1767, in her seventy-second year. Mistress Spooner’s marital status is unclear (she may or may not be the Sarah Spooner who married Thomas Hammond, of Plymouth, in 1712), but the Ms. on her tombstone is not a stab at language reform or a slip of the chisel, it’s just a shortening of Mistress by a stonecutter trying to save space on the already crowded slab.

To add to the confusion over the provenance of Ms., the title Mis (for the modern Miss) starts appearing as early as the 1660s in reference to an unmarried woman, though the form may also be used as a title without reference to marital state. In contrast, the first marriage-neutral proposal for Ms. pops up in the Springfield (Massachusetts) Republican on November 10, 1901 with the suggestion that Ms. blends Miss and Mrs.:

What is needed is a more comprehensive term which does homage to the sex without expressing any views as to their domestic situation, and what could be simpler or more logical that the retention of what the two doubtful terms [Miss and Mrs.] have in common. The abbreviation Ms. is simple. It is easy to write, and the person concerned can translate it properly according to circumstances. For oral use it might be rendered as Mizz, which would be a close parallel to the practice long universal in many bucolic regions, where a slurred Mis’ does duty for Miss and Mrs. alike.

A few years later, speaking at the feminist conference “Breaking into the Human Race,” held at the People’s Institute at Cooper Union on Feb. 20, 1914, the suffragist Fola La Follette recommends Miss as a general title for women both before and after marriage. La Follette gives no abbreviated form to accompany Miss, but her proposal may feed into later mentions of Ms. According to an article in the New York Times on Feb. 21, 1914:

Miss La Follette urged the abandonment also of the title Mrs., saying it was unnecessary to label spinster and matron; that if a woman was single or married or had children or none, husband or none, was her concern and no one else’s. Society didn’t ask a man first of all whether he was married and had children or not; and what was good for the gander was good for the goose, she asserted.

“If Miss is the form of address for women before marriage,” she said, “let it be so after marriage, too. Let the term acquire a larger social significance. When women keep their own name, a woman will not have to explain her children by wearing the name of a perfectly good legitimate husband who’s at home.”

Still another form, M’s, is discussed as a useful alternative to Miss, with no feminism attached, in a letter from M. J. Birshtein to the New York Times, printed on May 29, 1932:

To the Editor of The New York Times:

Whoever will answer my question will go down in history as the sage, who by means of his ever-enlightening wisdom enabled stenographers and direct-by-mail specialists to catch up on some lost sleep.

In addressing by letter a woman whose marital status is in doubt, should one write M’s or Miss?

One school of thought argues that should one address a married woman as Miss, no harm is done, for if anything she feels flattered; whereas should an unmarried woman be addressed as Miss, then most certainly no harm has been done.

In arguing against the use of M’s, this school says that it is too indefinite and that if it is used before the name of a single woman, it makes her extremely conscious of her “bachelor girl” state and thus creates within her a real feeling of antagonism.

A simple question, but deciding on the correct answer is not so simple.

Birshtein’s concern that M’s could make a single woman overly conscious of her “bachelor girl” status only makes sense if the form is pronounced Miss. He assumes that readers of the Times will already be familiar with M’s, and he implies that the question of its appropriateness is already being debated in business-writing circles, though it doesn’t appear again until the the late 1940s, where it takes the form Ms. Unfortunately, the Times didn’t print any answers that it might have received to Birshtein’s query, and discussion of a marriage-neutral honorific goes underground for almost twenty years.

Ms. resurfaced briefly in 1949, in Mario Pei’s popular Story of Language. Pei may be referring obliquely to La Follette’s 1914 proposal for marriage-neutral Miss, or to other similar proposals, as he instructs readers to pronounce Ms. as Miss, for which it stands:

Feminists, who object to the distinction between Mrs. and Miss . . . have often proposed that the two present-day titles be merged into a single one, Miss, (to be written Ms.), with a plural Misses (written Mss.), even at the cost of confusion with the abbreviation for “manuscripts.”

Ms. appears again in the 1950s, enjoying a brief vogue in business writing textbooks. But it didn’t really make much headway till the 1970s—Ms. magazine begins publishing in 1971—and the stylistically conservative New York Times didn’t O.K. the form as “fit to print” until 1986. By the 1970s, Ms. had also acquired the pronunciation Mizz, further distancing the form from Miss.

But now that Ms. has become an established honorific, its use today is as jumbled and vexed as the use of Mistress, Mrs., and Miss had been before it. In keeping with its 1970s relaunch, Ms. is still an alternative to the conventional Miss/Mrs. pair, but it’s also widely used by single women, not to mask their marital status in the same way that Mr. renders a man’s marital state invisible, but instead as a trendy alternative to Miss, regarded by some Ms.-adopters not as sexist but as old-fashioned. Ms. has replaced Miss for the growing number of English speakers who are pairing Ms. with Mrs. to signal unmarried/married much like the Miss/Mrs. pair it was supposed to replace.

Ms. hasn’t failed in its political goals. Instead, it has become complicated, like a lot of our usage. In one sense, the title Ms. has simply returned to the way things were back in Ms. Sarah Spooner’s day, where it could signal a lot or a little, and, in another sense, it’s a totally modern way of referring to half the population. Today Ms. functions as a title both for married and for unmarried women, a form chosen by feminists and non-feminists alike, though surely for different reasons. This confusion of usage continues the long tradition of women’s titles indicating, masking, or ignoring age or marital status. While language planners can consciously put a logical, “preferred,” or politically-motivated form into play, language users will either adopt or ignore those recommendations, or adjust them in unforeseen ways. Instead of following prescriptions, we twist them, invent our own expressions, or reshape existing ones, all to fit our ever-changing contexts and needs.

Reprinted with permission from OUPblog. All Rights Reserved.