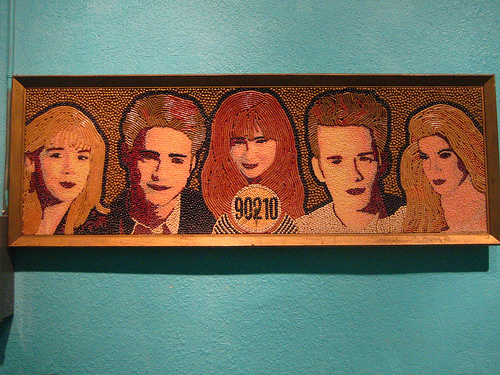 When I think about growing up in the 90s, I always return to one particular place: Beverly Hills, California. I never actually stepped foot in the zip code (until recently, when I came to work as an intern for Ms.), but I watched Beverly Hills 90210 every Wednesday night at 8 p.m. I followed the high school trials and tribulations of Brenda and Brandon Walsh as they navigated the dicey social scene of Beverly Hills, fresh from a move from Minnesota. I remember being really invested in Brenda and Dylan’s romance, annoyed by Brandon’s self righteous behavior and jealous of Kelly Taylor’s wardrobe.

Growing up as a feminist has its pitfalls, and pop culture is certainly one of them, but I believe 90210 served both as a catalyst for my pop-culture addiction and helped shape my feminism.

Andi Zeisler’s terrific book Feminism and Pop Culture talks about why pop culture is important because it has created a collective consciousness:

We’re also talking about the way we understand both the time and place in which we live and the way we define ourselves as individuals. When we look at our lives–both personally and collectively–we view them largely through the lens of popular culture, using songs, slogans, ad jingles and television shows as shorthand for what happened at the time and how we experienced it.

Watching 90210 is what I associate with growing up. I watched it with my family (yes, it was awkward at times) and learned some new facts of life. I remember, for example, when Brenda had sex with Dylan for the first time; I loved the fact she wholeheartedly wanted to have sex with him, and that the show didn’t shy away from her sexuality.

However, I also had problems with the show from a feminist perspective. The women on the show adhered to exhausting beauty standards: They were all thin, white, perfectly groomed and well dressed (for the 90s). And although the show touched on important issues like rape, domestic violence, AIDS and abortion, they didn’t always execute the story in a satisfying way (at least to this young feminist).

For instance, when the characters move on to college at California University, Andrea Zuckerman gets pregnant. Her boyfriend, Jesse, wants her to have the child, but she wants an abortion. However, she decides to not go through with it and has the baby. Yet another on-screen consideration where the procedure never happens.

Also, did I mention the huge problem with Ray Pruit (sometimes abuser and always bad musician)?!

Today, when I watch the new 90210 (yes, it is worth checking out) and laugh over absurd story lines or feel confident I could never wear a strapless bandage dress, I think of what Susan Jeanne Douglas wrote in Where the Girls Are: Growing up Female with the Mass Media:

… We must reject the notion that popular culture for girls and women didn’t matter, or that it consisted only of retrograde images. American women today are a bundle of contradictions because much of the media imagery we grew up with was itself filled with mixed messages about what women should and should not do, what women could and could not be.

Growing up with pop culture is its own battlefield. I simultaneously loved and hated Beverly Hills 90210, which allowed me to both enjoy pop culture but be critical of it at the same time. My feminism may be a bundle of contradictions, but I know I’m not the only one who loved/hated that TV show–like Marisa Meltzer, author of Girl Power: The Nineties Revolution in Music, who regularly blogs about 90210 and is collaborating on a new zine with Elizabeth Spiridakis in honor of yesterday’s date. Yes: 9/02/10.

What are your memories of watching 90210? Feminist? Sexist? Good? Bad? If not 90210, what pop-culture phenomenon shaped your growing-up experiences? How so?