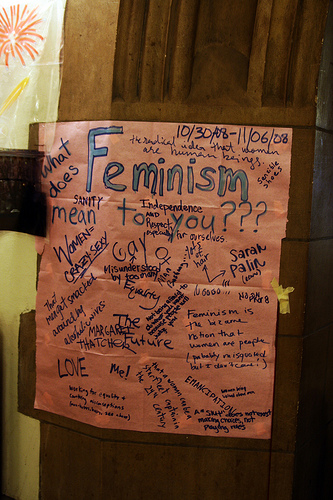 I’m your classic Second Waver–I came to feminism reading this familiar canon: The Feminine Mystique, Sisterhood is Powerful, The Female Eunuch, Lesbian Nation, The Second Sex, Against Our Will, Women and Madness, Sexual Politics, Towards a Recognition of Androgyny, Ms. magazine (I especially loved Jo Freeman’s essay “The Tyranny of Structurelessness”), Chrysalis and Heresies magazines, and anything Gloria Steinem wrote.

But since those days, I’ve gotten way behind in feminist theory. Aside from Ms., Steinem’s books and Susan Faludi’s Backlash, I garnered my feminism through experience, conversation and popular media rather than going to primary sources. I didn’t really know where the stairway was to feminism’s Ivory Tower, and no one came down to give me a map.

Last year, though, some scholarly feminist friends offered me a list of “30+ Feminist Must-Reads,” which would take me from the 70s through the present  day. I had already become more comfortable with words like “heteronormativity” and “intersectionality” simply by working with women’s studies scholars in my job editing Ms. magazine and now the Ms. Blog, so I felt I was finally ready to tackle the academic literature.

And so I begin my journey–which I’ll blog about here. I’m starting with our woman-of-the-past-week, bell hooks, and Chapter 2 of her 1984 book Feminist Theory: From Margin to Center. In this chapter–“Feminism: A Movement to End Sexist Oppression” [pdf]–hooks simply and clearly defines feminism. She points out that:

Without agreed upon definition(s), we lack a sound foundation on which to construct theory or engage in overall meaningful praxis.

In other words, if we can’t define feminism, we can’t develop a theory or practice of it (I had to stop for a moment and look up “praxis”–which means the practice of an “art, science or skill”). hooks quotes Carmen Vasquez, writing with frustration in the essay “Towards A Revolutionary Ethics”:

Feminism in America has come to mean anything you like, honey.

That, to hooks, indicates a “growing disinterest in feminism as a radical political movement.” And this is 1984, when “women’s lib” was still a common term for the movement, so imagine the struggle we’ve had to keep the movement radical for the past 26 yers!

hooks’ next point is critical: Most people, she writes, think of feminism “as a movement to make women the social equals of men.” But “which men do women want to be equal to?” she asks. Men of any race or class? Obviously not. Furthermore, hooks writes:

Women in lower-class and poor groups, particularly those who are non-white, would not have defined women’s liberation as women gaining social equality with men since they are continually reminded in their everyday lives that all women do not share a common social status. Concurrently, they know that many males in their social groups are exploited and oppressed. … [T]hey would not deem it liberatory to share their social status.

And that’s why, hooks notes, women in those lower-class groups were suspicious of feminism from the get-go: because they realized the limitations in its definition, which would make it apply primarily to middle- and upper-class white women.

An “anything goes,” sloppily defined feminism focuses by default on social equality (which, as hooks points out, is quite problemmatic) and an individual woman’s right to freedom and self-determination. And I stopped here in the chapter to reflect on the faux feminism being espoused by the Sarah Palins of the world: Theirs is  a sort of me-me-me feminism that doesn’t recognize the greater need for collective action. It’s a “romantic notion of personal freedom,” in hooks’ words, and it ignores the need to speak out against race and class oppression as well as sexism.

hooks lobbies for a different definition of feminism than social equality:

Feminism is the struggle to end sexist oppression. Its aim is not to benefit solely any specific group of women, any particular race or class of women. It does not privilege women over men. It has the power to transform meaningfully all our lives.

Considered as a movement to end sexist oppression, feminism then “directs our attention to systems of domination and the interrelatedness of sex, race and class oppression.” Ah ha!! Now I understand where the notion of “intersectionality” arises–not just from a philosophical or humanitarian desire to have an inclusive women’s movement, but from a realization that we must make a broader analysis if we truly want to end oppression. hooks writes:

[Feminism as a movement] compels us to centralize the experiences and the social predicaments of women who bear the brunt of sexist oppression as a way to understand the collective status of women in the United States.

It’s perfect to start my quest to understand feminist theory with a definition of feminism itself. Perhaps I’ll come upon other ones along the way. This one works just fine for me now, though: It’s a good lens to focus through.

Photo from Flickr user quinn.anya under license from Creative Commons 2.0