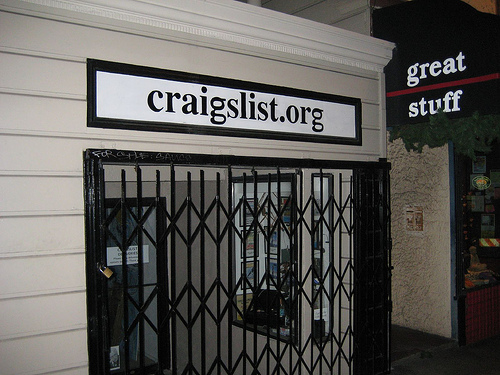 Last weekend Craigslist removed its “adult services” category on its U.S. website, sparking a range of reactions from feminists, including anti-trafficking activists, anti-prostitution activists and sex worker rights activists. I’m sympathetic to the concerns being expressed, particularly skepticism about whether this change will really make much of a difference. But in terms of one basic goal–delegitimizing the rampant commercial sexual exploitation of minor girls in the U.S.–the change on Craigslist is a victory.

As I described in my recent article in the summer issue of Ms., the campaign to persuade Craigslist to remove ads selling girls began in 2007 when Atlanta Mayor Shirley Franklin wrote an open letter to Craigslist’s CEO Jim Buckmaster, asking him to stop taking advertisements selling girls for sex. In May of 2009, under pressure from attorneys general in several states, Craigslist eliminated the “erotic services” section of its website, replacing it with “adult services” and requiring those posting ads to pay a fee. The website also promised to review each ad to ensure minors were not being sold and vowed to cooperate with law enforcement investigations.

But last spring a Schapiro Group study [PDF] sponsored by the Women’s Funding Network (WFN) showed that Craigslist ads were still selling hundreds of girls. Another recent WFN study of sex-trafficked girls in New York, Michigan and Minnesota showed the same. Advocates for commercially sexually exploited girls like Rachel Lloyd of Girls Educational & Mentoring Services (GEMS) in New York, A Future. Not a Past. in Georgia, and change.org, among others, continued to pressure Craigslist to remove the “adult services” section of the website.

Craigslist’s deletion of the “adult services” section will not stop the sale of girls—other websites will certainly pick up the slack, and some ads have simply migrated to other areas of Craigslist. But it does force buyers to face the reality of what they are doing when they have to go to a seedy website or drive the streets to find girls instead of finding them on a respectable, mainstream website under an “adult services” tab. And maybe that reality will dissuade them. It may also make it harder for women and girls, lured by the myth of easy money, to fall into the destructive world of selling illegal sex, as one woman described on Salon.com.

I am uncomfortable with the government telling consenting adults what they can do sexually, but I am appalled by the commercial sexual exploitation of underaged girls, the trafficking of adult women and female objectification represented in the sale of women’s bodies. Therefore, I think it’s a good thing that girls and women will no longer be openly sold side by side with bicycles, cars and stereo systems on Craigslist.