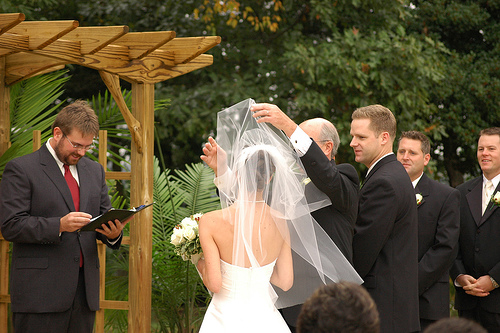 Remember The Swan? And Extreme Makeover? And Heidi Montag?

After a landslide of plastic surgery TV disasters this decade, I thought extreme surgery shows might be on the outs.

E! is bringing us a brand new series, Bridalplasty, a surgery voyeur’s fantasy in which women compete for the ideal wedding/body combo.

Here’s the premise: Brides-to-be compete in weekly “wedding-themed” challenges (like vow-writing and honeymoon-planning) to win one procedure from their plastic surgery “wish-list.” The ultimate winner of the show receives the extreme makeover and wedding of “her dreams,” and unveils her surgically re-created body to her fiancé at their wedding. He (because there are definitely no lesbian couples on this show) literally lifts the veil and sees the new face/body of his soon-to-be-wife for the first time.

Horrified? Yep, me too. But as Jennifer L. Pozner, author of the forthcoming book Reality Bites Back: The Troubling Truth About Guilty Pleasure TV says, if you’re shocked then the network and producers have done their job. Pozner writes,

Why should anyone be surprised that the “women are worthless if they’re not ‘perfect’ beauties, so get thee to a plastic surgeon, stat!” template ABC set with Extreme Makeover in 2002, and which Fox tweaked in 2004 with The Swan‘s post-surgical beauty pageant competition, would be retooled now via E!’s extra-classy quest for bridal “perfection?”

It’s certainly not shocking to see the socially inscribed insecurities of women capitalized upon by network television. But what troubles me here is the ubiquity of plastic surgery that shows like Bridalplasty represent– the ever-present possibility that you don’t have to look like you, if you can afford not to.

Instead of recognizing the larger cultural signalling of this show, some critics are slapping contestants with the handy medical label “body dysmorphic disorder,” a psychiatric condition characterized by the obsessive desire to change perceived flaws via any means, including multiple plastic surgeries. But frankly, I just can’t get on board with this for two reasons: Women (and men too) face endless and weighty pressures to be perfect, and TV shows like this reinforce that. Why not point the finger at producers who market “a new you” as a reality TV prize instead of putting a diagnosis on individual women?

And if the show’s contestants really do have BDD, is public surgery–the modern-day equivalent of a freak show–really a healthy and productive answer to an increasingly pervasive phenomenon? Probably not.