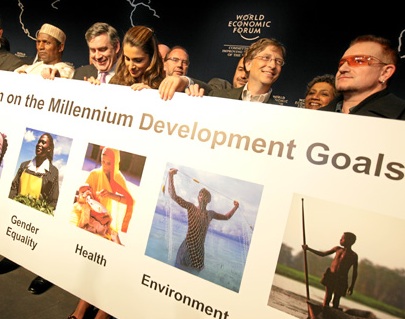 In the last two weeks, the United Nations hosted the Millennium Development Goals summit, women cab drivers navigated Cairo’s streets, the dispute between France and the European Union over Roma expulsions heated up and women’s rights activists stepped up the legal pressure to decriminalize abortion in Argentina.

Global: Last week, the United Nations hosted a three-day conference to track the progress of the Millennium Development Goals (MDG)–a set of eight anti-poverty initiatives to be completed by 2015. One hundred and forty world leaders met to renew their commitment to such initiatives as halving the number of people who have unsafe drinking water and the number of people living on less than $1.25/day, ensuring environmental sustainability and decreasing maternal mortality rates. The leaders noted that MDG number five, which seeks to reduce global maternal mortality rates by 75 percent, has seen the least progress since 1990, despite some local success stories, such as in Malawi. For a look at efforts to combat maternal mortality in Tanzania, see the upcoming issue of Ms. magazine.

Egypt: The first women cab drivers took to the streets of Cairo this year, breaking the former all-men monopoly and causing an international debate. According to the Tehran Times, the private company Cairo Cabs launched the fleet of women drivers to offer safe transportation for women riders. Egyptian activists have been increasingly vocal about sexual harassment on the streets and in transportation vehicles; however, the Egyptian Center for Women’s Rights argues that segregated transportation systems reinforce stereotypes about safety and aren’t a long-term solution. Yet for Enas Hammam, one of the eight women drivers in the city, the new fleet is not about a long-term solution to sexual harassment; it’s about the freedom to pursue her dream job. “I have always loved driving,” says Enas.

France: The dispute between France and the European Union over France’s expulsion of Roma heated up on Wednesday. According to The New York Times, the European Commission informed France that the country would face legal action for “failing to meet minimum European Union safeguards to protect the rights of the bloc’s citizens.” Over the last year, France has expelled more than 8,500 Roma (also known as Gypsies), prompting an international outcry that compares the expulsions to Nazi deportations. The Roma are sent back to Romania and Bulgaria, as well as to Kosovo, where, according to Amnesty International, inter-ethnic violence and persecution against the Roma makes their forced return a violation of international law.

Argentina: Also heating up is the battle to legalize abortion in Argentina. Tuesday, more than 1,000 members of Las Juanas–a women’s activism group in Argentina–filed writs of habeas corpus demanding that the courts declare the criminalization of abortion unconstitutional. Since 1990, September 28 has been recognized across Latin America as the Day for the Decriminalization of Abortion. While abortion advocates have repeatedly run into the fierce opposition of the nation’s powerful Catholic Church, the Argentine congress’ recent legalization of same-sex marriage has empowered advocates. Cecilia Merchán, a legislator with the left-wing movement Libres del Sur who introduced a decriminalization bill into the congress in March, said:

Just like in the case of the debate on same-sex marriage, society as a whole, even those who are opposed, don’t want to keep hiding a reality that involves so many people.

Currently, abortion is only legal in cases of rape or if the mother’s life is at risk, but each year there are an estimated 500,000 to 700,000 illegal abortions.