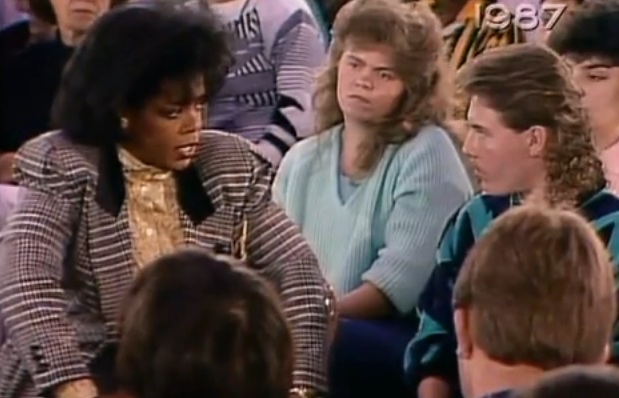 From ColorLines: Yesterday Oprah, whose 1987 program “AIDS in America” was groundbreaking, got schooled on HIV and had her own aha! moment. Her interviewee, a woman who sued her ex-husband after contracting HIV from him and won an unprecedented $12 million, corrected the daytime host when she referred to Magic Johnson as the poster child for living with HIV, explaining that average people don’t have the access to cutting-edge treatment that Johnson does.

Ellen talked to Anderson Cooper about how to put an end to pervasive homophobic bullying in our country that’s driving young gay people to kill themselves. (via Gawker)

From Jezebel: Sexually harassing frat boys are running our nation’s major newspapers (into the ground).

All the talk about the deplorable portrayal of women in The Social Network led to an interesting post about the erasure of women geeks from geek history over at the Geek Feminism Blog. The author fears that “when we look back on geek history, things women worked on and women who were involved in men’s projects will slowly vanish from the story as part of a pattern of making what geeks do important and hard and real.”

Rebecca A. Spence reported for RH Reality Check on the state of midwifery and the push for legislation to license CPMs (Certified Professional Midwives).

From TransGriot: A transphobic principal in the Dallas Independent School District barred a trans teen from running for homecoming queen.

The Court studied the demeanor of this individual very carefully throughout his testimony in Court today, and this gentleman does not appear to be overtly gay. … It is not readily apparent to a person who would see this gentleman for the first time that that is the case, since he bears no effeminate traits or any other trait that would mark him as a homosexual.

As Human Rights Watch’s nationwide event National Coming Out Day approaches, The Frisky’s Jessica Wakeman wonders, Do feminists need a coming out day of their own?

From Jessica Valenti: Her raw, emotionally honest account of her experience with pre-eclampsia and HELLP syndrome reminds us that, while she was lucky, “one thousand women die every day from pregnancy-related issues; one in four major causes is hypertensive disorders like pre-eclampsia.”

Above: Screenshot from Oprah’s 1987 special “AIDS in America”

Five Lessons the AIDS Epidemic Can Teach Us About COVID-19

“Innocent People Are Going to Die”: The Price of Presidential Narcissism and the Path of Peaceful Resistance
Here’s How Ohio Women Legislators Are Working to Keep Abortion Clinics Open
Abortion is Essential, Not Elective: How Republican Politicians are Using COVID-19 to Restrict Reproductive Health