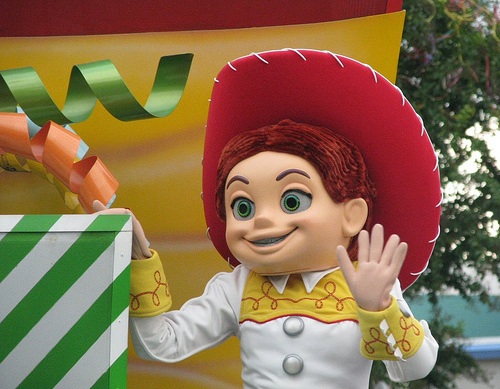 I had the pleasure of spending the weekend in the presence of Isla, a four year-old who LOVES Toy Story 2 and LOVES the cowgirl character Jessie even more. When the scene highlighting Jessie’s back story came on, Isla jumped off the couch in excitement and ran towards the television with a look of rapture on her face. Once the song finished and the main narrative resumed, she chanted “More Jessie, more Jessie!!!”

I could not agree more.

Sadly, if her parents bring home Toy Story 3 (released  on DVD November 2), she will find there is not all that much more Jessie. As noted in my review of Pixar’s third installment, the male toys–namely Buzz Lightyear and Sheriff Woody Pride–are still front and center, with many a male sidekick to back them up. Meanwhile, the female toys have gone missing (Bo Peep), fallen in love with Ken (Barbie) or gone soft for Latino Buzz (Jessie).

When I first viewed 3, I was almost giddy as Mrs. Potato Head and Jessie chased a train in the opening scene. “It’s about time,” I thought to myself. “Pixar is finally putting females front and center!” Alas, after that first scene, the movie went back to its male focus, even throwing in some rather sexist banter along the way. As one commenter pointed out in response to my first Toy Story post, Mr. Potato Head says at one point “ No one touches my wife, except for me!” while another character suggests that she needs her mouth taken off.

Many readers of my first post felt I was “over-analyzing” and misplacing my ire towards a company they see as less offensive than, say, Disney. I would agree that in many regards Pixar films are an improvement on Disney, but need I settle for “better than Disney”? Can’t I ask that the company also make films with female protagonists, with racial and class diversity, without homophobic jokes and, ahem, with FEMALE DIRECTORS? This is not to discount the positive aspects of their films and the creation of many positive female characters (Jessie, Violet and Elastigirl in The Incredibles) but to suggest that maybe it’s time to move on from the “one man band” concept and let some women run the show for awhile–both onscreen and behind the camera.

As another commenter pointed out,

Pixar seems to always have had a bit of a problem with creating main characters that aren’t male and that aren’t the protagonists of the story. This hasn’t stopped them from creating good characters however. Both young boys and girls alike have great characters to learn from in past Pixar films. They have had great girl characters that weren’t the main protagonists, but that hasn’t stopped those girl characters from being good role models and adding to the story in ways no other character could have. This I do thank Pixar for, and hopefully with time, they can better represent women and show just how strong we are.

I agree–but how long must we wait? As yet another commenter put it,

My cousin argued that it’s not Pixar’s problem to be socially conscious, but I countered with ‘What about the episode of Star Trek that showed the first interracial kiss? What about all the artists supporting the Civil Rights movement?’ Culture producers should advance ideals, and not just cater to the ho-hum standards of race, gender, religion, or anything else.

Bravo! I agree wholeheartedly–artists and culture makers have a responsibility to forward social consciousness and social justice. Sure, they can make us laugh along the way, but the laughs don’t need to come at the expense of girls, women, non-heterosexuals or people of color. I see the battles over media and representation as very real battles–it is never “just entertainment.” Media is our lens on the world, our socially constructing and norm-producing mirror, and when it becomes normalized for boys (whether they be toys, monsters, cars, bugs, or humans) to always be the most important characters, this lens is not only reflecting but perpetuating gender inequality.

Yet as one blogger laments, it’s hard to be a spoilsport about Pixar. She writes:

Two nights ago I emerged from Toy Story 3 feeling inexplicably depressed. Actually, it wasn’t really inexplicable—I  just didn’t want to admit the source of my feelings: I have become the joyless feminist who can’t even enjoy Toy Story. I am that person. …

I found Toy Story 3 depressing because of the lack of female characters.  … I’m concerned that, by omitting females or including them as mere tokens, popular culture tells girls and women over and over again that they aren’t as important and boys and men…  If joyless feminists are the only ones pointing out that ‘blockbusters’ like Toy Story 3 are bad for girls, then the world needs more joyless feminists.”

Indeed, the “joyless feminist” meme dominated the thread of comments on my original post–as if critical analysis of this beloved franchise meant I had no sense of humor and, possibly, no soul. My praise for the film was disregarded. Well, I disagree that my criticism of Pixar and the Toy Story franchise is pointless, joyless, nitpicky, or misguided. Four-year-old Isla shouting “I want more Jessie” this weekend only solidified my stance.

Now that the film’s out on DVD, those who missed it in theaters can cast their own critical eye on it. Let me  know what you think.