Women Choosing Math: But Does the "Choose" Fit? - Ms. Magazine
Skip to content 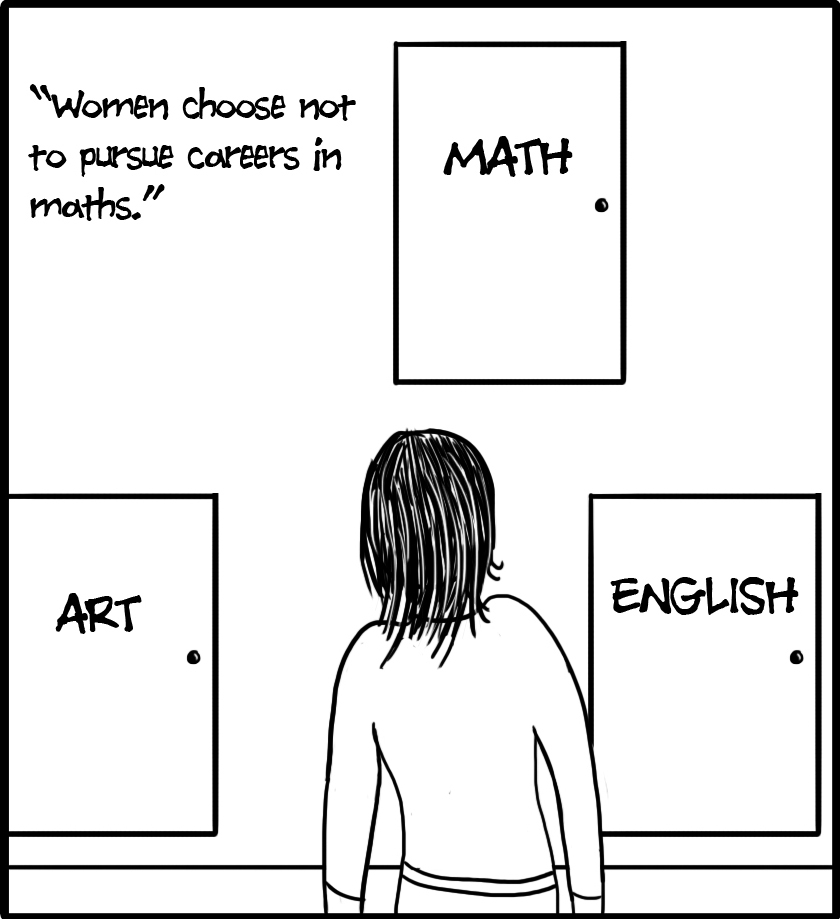 When talking about the lack of women in mathematical fields, the uninformed are likely to reference any of the above myths.

However, when taking a closer look at the steps that lead up to a woman’s decision to pursue a career in math, an entirely new set of variables comes into play. For example, the lack of role models (or lack of exposure to role models) for young women is often one of the first points to arise. Recently, the International Congress of Women Mathematicians stepped up in a bid to improve this.

A couple weeks after that conference, the Psychological Bulletin published a finding which basically confirmed what we already knew: that there is basically no difference between men and women in terms of mathematical ability.

A couple of weeks after that, a few scientists from Cornell University (Stephen J. Ceci and Wendy M. Williams) published a finding which said that the reason women are underrepresented in math and science really just has to do with choice. Upon reading this, my eyes popped, my bootstraps pulled themselves up, and I was ready to go into instant-response mode … but I decided it would probably be best to see if I was interpreting the study and the corresponding articles correctly. As it turns out, the mainstream media—or in the case which I’ll be examining below—TIME–writes coverage of this study that is very misleading (which is too bad, because most readers will likely accept this rather than read the original study).

Fortunately, at the end of the TIME article, the writer quoted Rebecca Goldin, an associate professor of mathematics at George Mason University. Her take on the matter–that girls are socialized away from math–fell in line with what I had written previously on the topic, so of course I had to contact her to see what she thought of this recent study.

But firstly, let’s take a look at what TIME had to say:

If a field involves lots of numbers, why does it seem to involve so few women? Some people say it’s discrimination, others say socialization and few, including a former Harvard university president, have said ability has something to do with it. (That’s largely why he’s “former.”). Now a husband and wife team, both academics (with three daughters), have analyzed the cognitive data and decided it’s not really any of these. It’s mostly about female preference and motherhood.

Though the implication here is that Ceci and Williams are dismissing socialization as the reason for why more women don’t pursue pure math, that really isn’t the case—as Goldin would explain later on. It did seem like they were avoiding a lot in order to make their point though: How (if at all) were they defining the concept of choice? Is it really a choice if society tells you beforehand that men will go farther than women in math? Goldin had similar thoughts:

By calling it ‘women’s choices’ we assume it’s freely made. Ceci and Williams do note in the press release that women tend to follow their husbands’ careers, especially when children are involved. Is that a free choice, or socially constrained? Some would argue that no choice is made without the context/environment/meaning that society puts on the choice. In a similar vein, women’s career choices may reflect their sense of self (somewhat independent from their accomplishments in school) and they may choose to pursue fields with many women in them because they are “socialized” to feel that they don’t “see themselves” as an engineer.

But why were women choosing other careers? One possible explanation Ceci and Williams gave was that women find obtaining tenure-paced positions, in addition to parenting, to be extremely difficult–so they tend to stray from that path. What about socialization? Says Goldin:

I do think that the Ceci and Williams article is rather dismissive of socialization. They say, for example, ‘One cannot assert that socialization causes girls to opt out of math and science when girls take as many math and science courses as boys in grades K-12, achieve higher grades in them, and major in college math in roughly equal numbers to males.’ I disagree. Can one imagine that girls who are really great in science nonetheless do not identify as scientists? Can someone be amazing at mathematics in high school, and still feel that pursuing a PhD in mathematics is a male thing to do … ? In other words, can the emotional state of girls and boys be vastly different while girls are performing comparably to boys in school? Of course all of this is possible. And despite the close balance of men to women in math majors at the undergraduate level, there is quite likely already a deep difference in attitude about what each gender wants to do with his or her degree. Of those interested in pursuing a PhD and a career in academia, I suspect there are far fewer women than men. Is this because they are simply ‘uninterested’ and ‘making other choices’? Or are their feelings a complex reflection of how they see themselves fitting into society?

Ceci and Williams provide another reason why women may avoid math: Women have better verbal abilities than men, which gives them more career choices. Reminiscent of the ‘women lack in mathematical ability argument’, this point seems to be a stereotype in itself (studies have been conducted which prove any difference is marginal, though I suppose there will always be studies that will say otherwise) so it is strange that they would bring it up in a study that seems poised to debunk such stereotypes.

On this, Goldin says,

… I have yet to meet a man or a woman in academia who felt that they chose their career because they couldn’t do anything else. Quite to the contrary, the choice of academics is one of comparatively lower salary in exchange for control over your intellectual endeavor in the specified field. Most men and women who stayed in academics have many other choices they could have made, most of them offering more money for the same hours. Simply put, there is no (anecdotal or hard) evidence that men have fewer options than women.

With all of the above said, though, Ceci and Williams do a good job of pointing out what isn’t preventing women from continuing in math (such as mathematical ability or employer discrimination in hiring–in fact, their study shows that women are slightly more likely to be invited back for an interview than men).

They conclude by stating that “The primary factor in women’s underrepresentation is choices both freely made and constrained by biology and society.” It should seem obvious that this is a contradiction—choices with constraints are NOT free choices. The takeaway for the casual reader should not be, “See, women choose not to be in math, what were we worrying about?” but “Oh, it’s not really a choice after all…”

For additional reading, please see “Women and the Numbers” at Gender Across Borders.

Comic Strip via Watching From Afar.