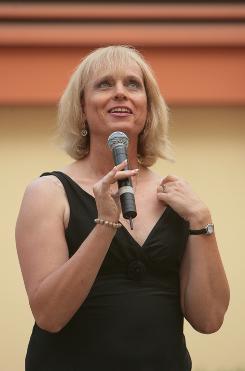 Growing up, the only transgender person I’d ever heard of was Christine Jorgensen. Later, I knew of Jan Morris and Renee Richards and Wendy Carlos. I knew very little of transmen until I watched the terrific documentary Southern Comfort, about a transman dying of ovarian cancer, nearly a decade ago.

It’s only in the last few years that transgender people have become part of my life as friends–and family.

First there was my stepbrother Michael–now my stepsister Michaela. Of course it was quite a shock when I first heard the news that this handsome 50-something father of three was in transition; I had never noticed signs of gender dysphoria (we only became step-siblings as adults, and haven’t spent all that much time together). But as the only other LGBT person in the family, I was sort of the designated person to turn to for understanding–and it was a good challenge for me. I needed to read transgender writers like Julia Serano and consider if my old feminist attitudes about transmen and their appropriation of male privilege, or about transwomen and their performance of hyper-femininity, still held up under a present-day examination of gender. I decided that it was a lot more complicated than that.

I’ve also gotten to know the gorgeous and talented Kimberly Reed in the past year–a remarkable filmmaker and former high school football quarterback who documented her return home to Montana as a woman in her film Prodigal Sons. Having never known Kim as a man, she is simply a tall woman to me; the “trans” part disappears. I realize that it’s much harder to forget the man that was Michael, but that makes sense considering how much longer I knew him than I’ve known Michaela.

And then there’s Chaz Bono, with whom I co-wrote a book when he was still Chastity. He spoke often of his gender dysphoria while we were working together, and though he didn’t ask for my silence I kept it a secret until he eventually came out. I knew he no longer wanted to have breasts–he wanted to look in the mirror and see himself externally as he felt internally. And he looked forward to the idea of shaving (I asked). I knew he didn’t even consider himself a lesbian any more, but rather a straight man. At the time, though, he was unwilling to make the change because of the impact it might have on his mother, Cher. Obviously, as he turned 40, he realized that he had just one life to live, and despite Mom’s discomfort he had to live the rest of it in the gender that felt right.

Finally, there was Christine Daniels. And that’s the person I want to remember on this annual Transgender Day of Remembrance. I had read his work but never met Mike Penner, the Los Angeles Times sportswriter whose body Christine had inhabited until 2007, when she announced in the Times that she was now Christine, her new name inspired by Jorgensen and a Siouxsie and the Banshees song. Having just learned about Michaela’s transformation, I was eager to talk to another transwoman, and asked The Advocate for an assignment to interview her.

Christine and I immediately hit it off as we had lunch at the Avalon hotel in Beverly Hills. As the maitre d’ led us to our table, referring to us as “ladies,” Christine smiled and said to me, “I just love hearing that.” It was such an odd moment for me–“ladies” can often feel pejorative to a feminist; to a newly coined woman, it feels like validation.

After that interview experience, Christine and I had lunch together a couple of times, just for fun. I’m a sports nut and pop music lover myself, so we had plenty to talk about besides her experience of coming out so publicly.

And then she disappeared. She didn’t return my emails. The blog she was writing about her transition didn’t just stop being updated, but vanished entirely from the Times website. Christine’s byline went missing. And after awhile, the byline of Mike Penner returned.

But that obviously didn’t end the pain and confusion that Mike/Christine was going through. On November 28, 2009, Mike Penner ended his life and that of Christine Daniels as well.

Much has been written about Mike/Christine since then. Like me, some have wondered if she died as a man or a woman. One writer speculated that the depression that led to his suicide was the result of his breakup from wife Lisa Dillman, a fellow Times sportswriter.

Ultimately, the finger points back to a society that still has a huge difficulty accepting difference. I don’t believe Mike/Christine was killed by hate, as Transgender Day of Remembrance was designed to condemn while it gives honor to murdered transpeople. He died from depression and hopelessness, but that feeling had to have been exasperated by a world without enough room for gender divergent people to feel safe, to feel treasured, to feel validated.