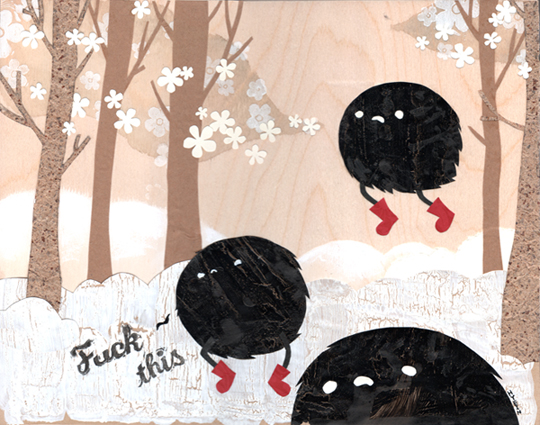 Looking at canvases belonging to Hyein Lee, you might just find iterations of the word fuck, products of pent-up frustration morphed into art. If you look hard enough, you might also find that other F-word, if not as literally.

But who is Hyein Lee? Besides being an award-winning illustrator from the land where the deer and the antelope play (Toronto, Canada), and besides being featured in various festivals, conventions and public space takeovers, besides stamping profanities onto pieces of her art that she dislikes and entering them into fundraisers anyway, Hyein Lee is a feminist. One whose gender-less monsters wreak havoc across her paintings and experimental videos.

After reading her instantly immortal webcomic, The Girl in the Attic, I contacted Lee and had the opportunity to discuss her beginnings, how feminism influences her work and the state of women in comics:

Firstly, do you consider yourself a feminist, and if so how does that come across in your art?

I definitely consider myself as a feminist. To be honest, I haven’t been academically educated on feminism. I have only been following Bitch magazine and other publications. Growing up in Korea, which still has a very paternalistic society, naturally made me a feminist. Also, going through a male-dominated engineering university in Canada taught me that there still is strange inequality in Western society too.

I know a lot of young women are afraid to call themselves a feminist, even when their ideals are consistent with feminism. I suppose the term ceased to be cool more than a decade ago. I find it a little worrisome because there still is a lot of work to be done for both genders.

My comics are mostly about my experiences, whether it is about violence against women or about a young woman searching for love. I don’t consciously think about feminism while I am writing, but the underlying philosophy sometimes seeps out.

My video games and digital toys are gender neutral. I want more younger girls to play with these interactive pieces and get interested in making their own. I think playing with video games and digital toys familiarize girls [with] technology. Hopefully, they would choose a profession in a technological field. I believe it is important to do that in order for women to achieve economic parity. I’m not saying my lowly indie video games have such an impact, but maybe some girls will see a possibility of making something better than mine.

For my other art, conscious or not, I often use animals and monsters as main characters to try to stay gender neutral. I do sometimes paint things that I am ashamed of, ethically, but I cannot theorize too much.

How did you get your start as an artist?

When I grew up in Korea, my mom worked as an art teacher and my dad as an interior designer. My parents exposed me to a lot of art; we often visited contemporary art museums, galleries and weird theaters. I’ve been painting as long as I can remember. Art seemed like a fate and everyone thought I was going to be an artist. Then somewhere along the line, something went wrong and I became an engineer (I actually love math and science). Studying was fun, but the job wasn’t for me. I kept thinking, If I get hit by a truck right now, I’d regret not pursuing my dream. I guess I thought being permanently poor is a better life choice. I went back to school to study illustration and have been making commercial and fine art ever since.

Many often ask why I jump [from medium to medium]. A lot of artists stick to one medium for their entire career. I want to try a lot of different things. Learning a new medium inspires me.

“Mr. Furry Pants” (seen at top) was for a show called “Birds n’ Bees”, I didn’t know that “birds n’ bees” is an euphemism for sex. I was getting very frustrated painting birds late at night. After ruining many canvases, I gave up and made whatever I wanted. I carved and stamped the ‘f’ word reflecting my frustration. I really liked the resulting painting afterwards.

“In Bruges I” was painted right after my trip to Bruges. I always wanted to go to Bruges, ever since I saw that city in the movie Daughters of Darkness. Later, watching another movie set in the city, In Bruges, I had to visit the city. I often travel alone (not by choice… sniff). Bruges, the beautiful Gothic city becomes empty after 5 o’clock when all the museums close. I was strolling the city alone, eating Belgian fries, feeling a little lonely. I sold this painting for a very low price during my desperate times, and I regret selling it.

“Ambidexterity” was actually a third reiteration. It started as a dream. In my dream, I said I want to be ambidextrous. A girl with severed wrists appeared and told me, “Cut off your right hand, and you’ll use your left hand more.” I woke up and made a sketch. Then painted on a 9X11” paper. The third reiteration is on a life-size paper. I plan to do a series featuring her. It reminds me of the Bluebeard folktale.

The Girl in the Attic is a very powerful comic. Could you talk about the process of writing and creating that?

I’m grateful that you found it powerful. It actually happened to me and I grew up often worrying about that girl in the attic. When I was in Sheridan College, my wonderful teacher, Blair Drawson gave us an assignment: look at the mirror and tell yourself everyday, “Among many things, I am a writer”. That simple exercise gave me a confidence to write my own stories. I started to show my dark stories that I haven’t told anyone. I think stories that are closest to your heart is the most engaging. 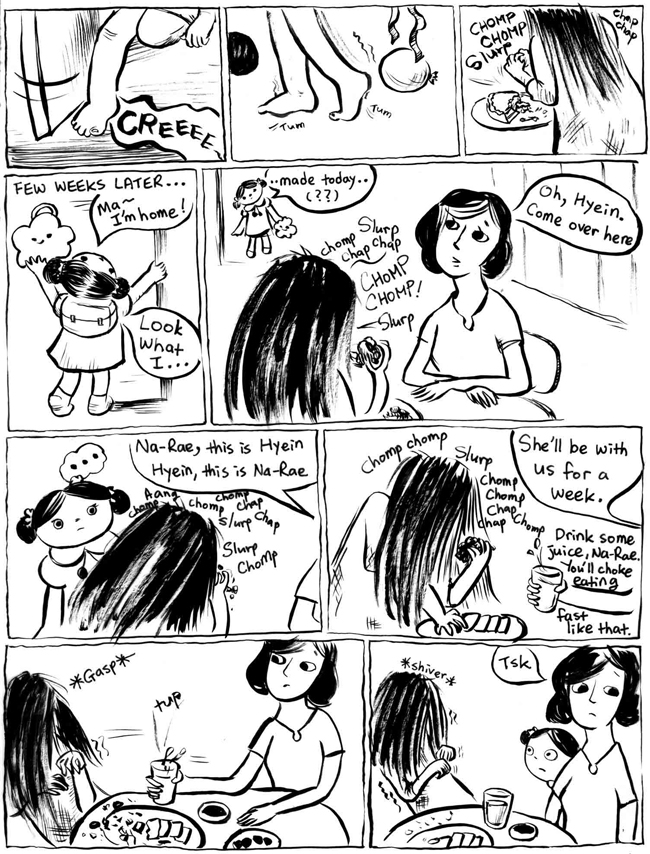 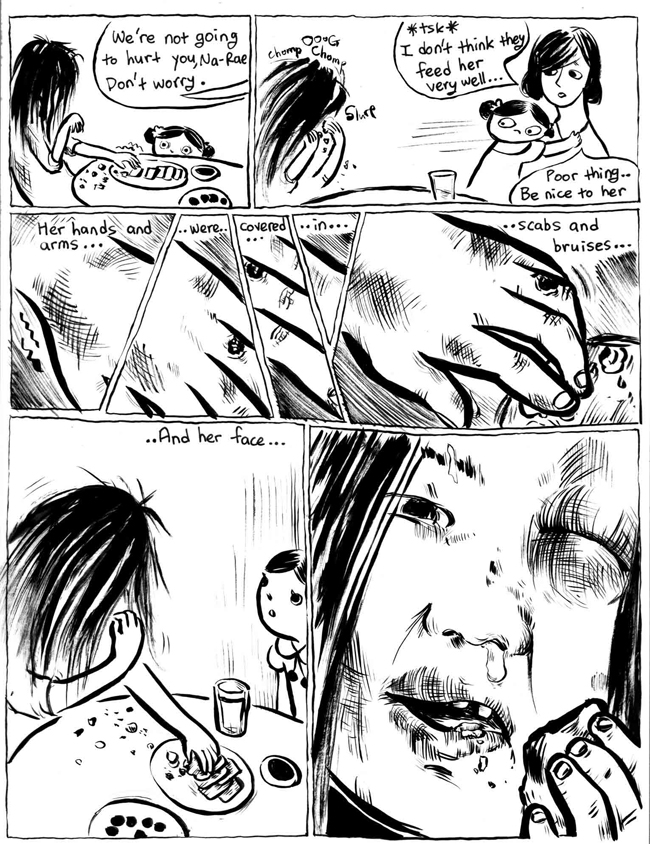 How would you describe the current state of women working in comics? It seems things are far from a gender balance but, especially with the rise of graphic novels in recent years, more notable women writers/artists are gaining mainstream exposure.

It is a hard for me to comment on the mainstream comic industry because I do not know how things work in the mainstream publishing world. After being rejected from all the publishers, I print my own comics. However, I doubt it’s due to the gender inequality. I think it’s because of the rough nature of my comic brushing work and some of the flaws in the writing. I think there are fewer women in mainstream graphic novels because there are fewer women creating comics. We should all create more work and work harder.

Why do you think there are fewer women creating comics?

I find that it’s just in North America. I grew up in a culture that’s a bit different in the comic world. I think it’s like a vicious cycle because not many women are creating comics, not many comics are made for women and because women don’t read comics in North America they don’t create comics. My experience in Korea… we have a market for girl comics and I find that this is less so in North America (though most of these “girl comics” were not building strong independent female characters. Most them were sappy Cinderella-like stories. However, growing up with reading comics inspire many girls to create comics).

Most of the mainstream comics are superhero or quite violent and, as a girl, I’m not really interested in reading those that much. I sometimes read them but I’m sure that a lot of girls feel the same. But in the indie comic industry there are a lot of women.

As an indie artist yourself, how do you distribute your comics?

I go to local comic stores and I go to a lot of conventions and I show them to a lot of magazine publishers and the small press; (laughs) I do get rejected a lot. Beguiling in Toronto carries some of my work and I also publish a lot of work online.

I used to go to Silver Snail… (note: the unofficial rival of Beguiling)

(laughs) I live right in front of Silver Snail!

I had recently watched some of your interactive art videos (specifically the Loneliness ones) could you please explain how this idea originated and what your goals for this project were?

You know how in cartoons, when the main character is having a bad day, a black cloud follow her? That was my original idea. In “Loneliness Is II”, when you step into the screen, a cartoonish black cloud follows you and pours raindrops. ‘Loneliness Is I’ piece has bunch of rain drops with cute & sad faces falling. When an audience step in with a red umbrella, the rain drops bounce off of him.

I also thought about society’s (and my) obsession with cute images. We seem to be addicted to cute aesthetics. I wanted to show the somber feelings that cuteness entails. When times are bad, we want to look at cute things and forget about harsh reality. I read in a Vanity Fair article that just like Shirley Temple rose to her fame during the Great Depression era, we are addicted to cuteness these days in the face of recent economic meltdown.

What are you currently reading?

I read a lot of science fiction novels (especially Octavia E Butler and Margaret Atwood)–as a feminist, I really like sci-fi novels with a strong female lead. I find, like comics, that sci-fi is written mainly by men and they often forget that women read sci-fi too. So the female characters are often one-dimensional or annoying or things like that. I find that when I read a novel with a strong female character I become more attached to the novel. For comics, I really admire Marjane Satrapi‘s work (author of Persepolis).

What are you currently working on?

For a long-term comic project, I am writing about my experience of working in the oil sands of Alberta. It was the best of times, it was the worst of times of my life. I’m also working on a silly little indie video game, due next Spring. It is tentatively titled Dell’Amore, after my favorite movie of all time, Della Morte Dell’Amore.

Could you share any details on the video game?

It’s about a little girl, a polar bear, and an alien. The little girl and the polar bear are really close friends and one day the alien UFO comes down to the Arctic and accidentally lands on top of the polar bear. The girl thinks the polar bear is dead so she wants to get revenge on the alien. It’ll be released for free online.

Lastly, for the next few days, I am working towards a show themed Krampus at Resistor Gallery in Toronto. Krampus is a pagan evil creature celebrated in Hungary, Austria and Germany during the holiday season. He is a counter part of Santa Claus, and punishes bad children. I’ve never heard about such creature until very recently, and I think he’s totally awesome! I am very excited about this show. I’m making a giant furry mask and a new painting.

All photos and artwork courtesy of Hyein Lee.