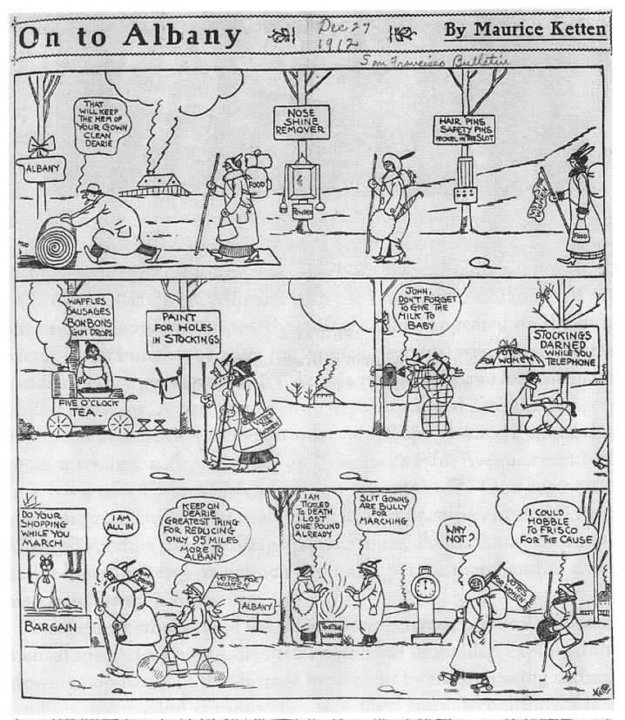 Nothing like it had ever been done before. In fact, until four years earlier, no group of women had ever been bold enough to defy custom and propriety by marching even a few city blocks in a public demonstration of support for woman suffrage. But Rosalie Jones proposed a 150-or-more-mile march from New York City to Albany. In midwinter. With just eight days to prepare.

The reaction ? Unbridled enthusiasm from the day the first announcement went up in the local suffrage headquarters. In just over a week, a small “army” of “pilgrims” was assembled and outfitted with hiking staffs, suffrage-yellow knapsacks and huge amounts of literature to distribute on the long road to the State Capitol.

On December 16, 1912, “General” Jones called her troops into formation at Broadway and 242nd Street. Amid shouts of “Votes for Women!” they headed off for their first stop in Yonkers, another “army” of “war correspondents” in tow, and mounted police escorted them to the city limits. In what would become a recurring pattern along the route, they were greeted in Yonkers by local suffrage groups, the mayor and chief of police, then given a warm welcome by townsfolk at a rally in the city’s center.

As expected, the army’s numbers were considerably reduced after the first day’s march, the ranks thinned to three “real hikers” (Gen. Jones, Col. Ida Craft and Surgeon-General Lavinia Dock) at the lowest point. But the ranks of “war correspondents” stayed full, with 14 reporting each day’s battle against fatigue and the elements to their papers, the stories then syndicated nationwide.

The weather proved a worthy adversary. Very few roads outside of cities had any kind of improvement, so rain and snow turned dirt into mud, with fog or fierce winds thrown in now and then for good measure. But as Gen. Jones put it:

The weather shall not daunt us. We are going to Albany, and the road lies on ahead.

The most challenging day was their ninth, when the “suffrage army” slogged 22 miles from Upper Red Hook to Hudson in an all-day, wind-blown snowstorm. Though some adversities were expected, some were not–such as an errant rocket set off to salute the hikers going sideways and knocking the staff out of Col. Craft’s hand, or a car bringing them back from a night speaking engagement skidding off the road and down an embankment, nearly turning over on the hikers. But there were pleasant surprises on the road as well: sledding with kids during a break; students in a girls’ school and a boys’ school competing with each other to give them the best cheers; and groups of people showing up in even the tiniest, most unexpected places wanting to hear a suffrage speech.

On December 28, they arrived in Albany–two days early! After spending those extra days giving speeches around town, they finished the final part of their mission on the last day of the year. They marched to the executive mansion and delivered a message to Governor-elect William Sulzer from several New York suffrage groups asking for his support. This was seen as critical to “The Cause,” with a statewide suffrage referendum proposed for 1915. Gov. Sulzer was extremely cordial, and vowed his support for woman suffrage. Mission fully accomplished, the “pilgrim army” disbanded and happily headed home.

But they didn’t stay home long. Recalled to duty on February 12, 1913, the veterans of the Albany march and many new recruits would set out on foot for Washington, D.C., to join 7,000 of their sisters there in a landmark suffrage pageant on March 3. The road to August 26, 1920 and nationwide suffrage was still a long one, but it clearly ran through Albany in 1912. Ninety-eight years later, the efforts of that small band of fully dedicated suffragists deserve to be remembered and celebrated by those whose path to the voting booth is now so much shorter and easier thanks to them.