"When We Leave": An Interview with Director Feo Aladag - Ms. Magazine
Skip to content

On January 28, When We Leave–Germany’s official Oscar entry for Best Foreign Film–will be released for North American audiences. The powerful film has already collected a number of accolades, including the LUX prize given by the European Parliament and the Tribeca Film Festival prize for best narrative feature. It offers a startling look at honor killings, following the life of a young woman who, after leaving her abusive husband in Turkey with child in tow, finds not just a lack of support from her immigrant family in Germany but outright hostility. (For our review of the film, check out the Winter issue of Ms. magazine, which hits newsstands on January 25.)

In Los Angeles to promote her film, director/producer/writer Feo Aladag–an Austrian-born former actor who is married to Turkish German filmmaker Zuli Aladag–was kind enough to stop by to answer a few of my questions.

Ms. Blog: Before you made this film, your first feature, you produced two short spots for Amnesty International. How did that come about?

Feo Aladag: I had been asked by Amnesty International 8 1/2 years ago if I would like to direct, write and produce two social spots, 30 seconds long, on their campaign to stop violence against women. I did research for a couple of months before I started writing those scripts and came across a lot of stories that touched me and made me angry. When my work was finished for Amnesty, I realized that there were still a lot of things that I wanted to understand that really had a grip on me.

You were an actor, not a director–why did Amnesty come to you?

What was your inspiration for When We Leave?

At the time, there was media coverage on so-called “honor crimes” in Europe. I dived into those issues–very much related to what I did before. I figured out that I didn’t necessarily have to go to far-away countries in order to talk about certain dynamics; they were happening right in front of my door; they were going on in Germany, where I was living at the time. When I started doing the research there was already a very high rate of “honor crimes” in Berlin–five in just four months. There was even more of a validation that it was okay and necessary to tell a story like this.

What obstacles did you face getting the film from script to screen?

I came in with a great deal of passion, asking people to join in and to hop on board, and basically saying, “No hard feelings if you don’t want to trust my debut, that’s fine, but this is what I want to do and this is the finished script and it’s not really up for some debate.” That had a certain power, I think, because you generate a feeling of “I will do it anyway, and I’d be glad if you would join in.” 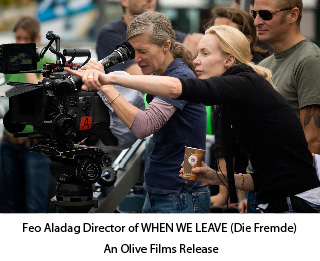 How did you juggle being a writer, producer and director?

Honestly, if you asked me what I wished for most you would probably hear sleep.

In November, you won the LUX Prize for the film. I noticed that not only did you win the award but you were the first woman to even be in competition for it. What did that mean to you?

A lot. First of all, standing there in front of the full European Parliament, where so many decisions are being made and you get this award and you’re allowed to say something … obviously, you’re really tempted to say something political.

(laughs) Exactly. It made me very proud when the president of the European Parliament gave the speech on the award because I heard a lot of women in the parliament just going “YEAH!” and whistling. I thought it was quite amazing–I didn’t even know I was the first woman to ever be nominated or awarded.

It’s the same with the Oscars–it was only last year that a woman won for best director.

I agree. They’re instrumentalizing it, in a sense. And therefore making themselves part of it.

In receiving the LUX Prize, you stated, “I made Die Fremde [the film’s German title] because I believe we live in a multicultural society which can no longer rest on promoting consensus but must rather find new ways in dealing with arising divergence.” How has the film promoted and accomplished this notion of arising divergence?

I think the film helped promote an ongoing dialogue. How does a majority deal with its minorities? It’s a two-way street. It’s about focusing on the similarities rather than the differences. If we want to change something within the society and if there’s a problem with how majorities deal with minorities, then the first thing we have to do is encounter each other at eye level and give each other the feeling of being welcomed.

One of the questions that I took away from the film was what sacrifice is independence worth? And what does it mean to be free? Umay [the lead character, played by Sibel Kekilli] managed to break away from that abusive marriage but was still bound by tradition and her family.

I think we only really feel free if we accept the other person’s freedom. So what price is independence worth? I think it’s worth a lot. What’s most important is that we don’t take away loyalty and love and solidarity from those we love by chaining it to some sort of condition of how they behave or how they live.

What message do you want North American audiences to take away from this film?

Reach out to one another in empathy and focus on the things we have in common and not on our differences. I’d be very happy if an audience member took away a question or just a moment. You and I have seen a lot of films in our life and you never remember the whole film, but there are certain films that have certain moments that stay with you—or raise a question that stays with you. And that’s something I would wish for.

All photos courtesy of Olive Films.