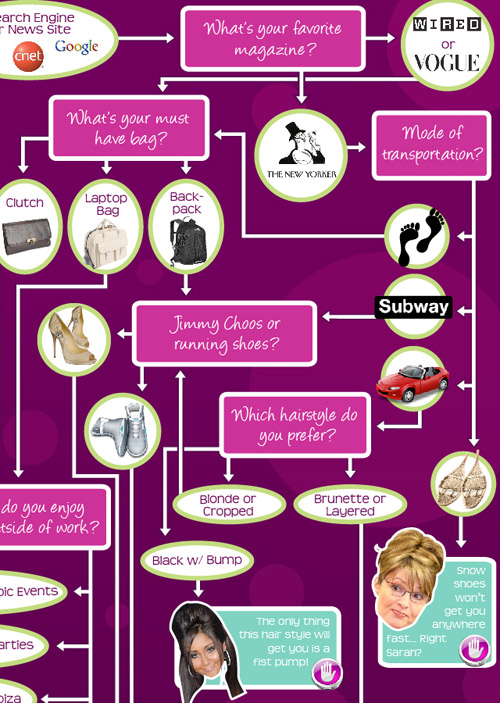 This week brought us one of the most unabashedly stupid infographics ever to go viral, “Which Female Tech Influencer Are You?” The Frisky‘s Jessica Wakeman fires back.

You can regain your faith in humanity over at feminist academic Minh-Ha T. Pham’s new blog Of Another Fashion: an amazing “alternative archive of the not-quite-hidden but too often ignored fashion histories of U.S. women of color.”

For The Nation, Sharon Lerner previews the upcoming battle over whether birth control counts as preventive medicine. Since health-care reform requires full insurance coverage of preventative services for women but doesn’t specify what they are, it’s up to the government–the Obama administration, the Department of Health and Human Services, the Tea Party Congress, etc.–to sort it all out for us. No worries there!

Over at Feministe, Jill lays out what Kermit Gosnell’s “house of horrors” tells us about abortion–and what it doesn’t.

At Racialicious, Latoya Peterson notes that, in all the flap over Kanye West’s sexually violent “Monster” video, race has been largely overlooked. Like “conversations that happen around feminism and black women,” she says, “the reality of black women is assumed to be exactly the same as white women–if it is mentioned at all.”

NPR’s Morning Edition profiles lesbians in Pakistan, who live in fear and silence and love in secret.

At Jezebel, Sadie Stein reacts to reports of widespread rape of women in the Peace Corps.

Lastly, in honor of the 38th anniversary of Roe v. Wade, Shark Fu gives us words of encouragement in the face of continued assaults on abortion rights:

When race-baiting billboards declaring that the most dangerous place for a black baby is in a black woman’s womb are placed in American cities … I  am concerned.

When health care reform passes by a slim margin and with unacceptable reproductive health care compromises … I am concerned.

When anti-choice groups distort the history of black people in their quest to rustle up fear and shame women of color … I am concerned. …

But I am also encouraged. …

For all of the assaults on reproductive justice, the response … the amazing empowerment of the people in defense of our rights … encourages the hell out of me.

We will meet all of these challenges together … answer the insult of their lies and misrepresentations with the clarity of truth and the power of justice … and we will march on.

Read the rest at AngryBlackBitch.

ABOVE: Portion of the infographic “Which Female Tech Influencer Are You?”