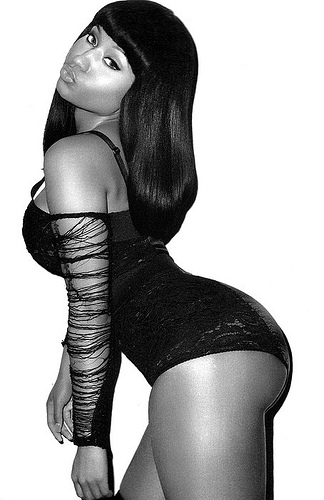 It had every stereotype of Black womanhood one could think of: the prerequisite “crazy hair” passed off as the “real thing”; the sassy attitude coming from a “ho who didn’t know her place”; and, above all else, a “booty” that is a “masterpiece of modern science.”

For those who missed it, I am describing a skit that appeared on Saturday Night Live this past weekend, featuring guest rapper Nicki Minaj as the “bride” in the blaxploitation parody, “The Bride of Blackenstein.” The various comments on its YouTube video already indicate that the jokes are a hit–but at whose expense?

On the one hand, I will admit to finding certain parts humorous, precisely because the jokes rely on certain ideas about the Black female body, which Minaj exploits shamelessy in her pastiche-hybrid mimicry of Lil’ Kim and Lady Gaga–part “monster” and part “Barbie Doll.” (See spoken-word poet Jasmine Mans’s deconstruction of this problematic hyper-feminine performance.) On the other hand, how long will a Black woman’s booty continue to be the source for entertainment and comedy?

While SNL sought to recall the history of ’70s blaxploitation films in “Blackenstein,” I saw a deeper history in its connection between Frankenstein and the Black female body. We may recall that Mary Shelley, the daughter of women’s rights advocate Mary Wollstonecraft, penned the original Frankenstein, first published in 1818. Notably, a year earlier, the prominent scientist Georges Cuvier penned his own “masterpiece of modern science”–a thesis about the famed buttocks and genitalia of Sara (Saartjie) Baartman, a South African woman who was exhibited in England and in Paris as the “Hottentot Venus” between 1810 and 1815.

The premise of Baartman’s Hottentot Venus show focused on her supposedly too-large behind and the belief in her “missing link” status as a “Hottentot,” a now derogatory term used to describe the Khoisan ethnic group residing at the Cape of South Africa. That group was believed to be so “primitive,” straddling the line between human and animal, that only they would find someone like Baartman to be a “Venus.” Any white man who found Baartman desirable was in danger of “reverting” back to his “primitive” form (even though Victorian ladies donned bustles later in the century).

Shelley, who wrote her science fiction as a criticism of scientific violations of the natural world and the “mad” scientists who obsessed over “penetrating nature’s secrets,” may have had men like Cuvier in mind. Cuvier literally penetrated such secrets in his dissection and preservation of Baartman’s brain and genital organs. His thesis, which compared Baartman’s genitalia to those of orangutans, formed the basis for much of 19th-century scientific racism, which later evolved into eugenics.  Of course present-day science is quick to remind us that race is a social construct and not based in biology, but popular culture can keep this strain of thinking alive with its reductionist representations of Black (and white) female sexuality.

I admit to being sensitive to such representations and to this particular history since I had my own encounter with Baartman back in 1999 while on a research trip to Paris–an encounter which shaped my dissertation and book, Venus in the Dark: Blackness and Beauty in Popular Culture. I stood in front of her skeleton at the Musee de l’Homme, where her remains had been on public display as late as the 1980s, and witnessed the plaster cast that Cuvier molded from her cadaver, which he eagerly acquired because Baartman, when she was alive, refused to show him what was between her legs. There was a rumor circulating at this time that women like Baartman possessed a “Hottentot apron”–an extra flap in the vaginal lips–and the French scientists of this era just had to know if such a thing existed and if it were a natural occurrence or a cosmetic alteration.  In death, Cuvier could do what he wanted with Baartman’s body, so in effect he turned her into a specimen.

Baartman’s is quite a contentious history, since her remains became the subject of a postcolonial struggle between France and South Africa after Nelson Mandela demanded in 1994 that she be returned to her homeland. The French government resisted at first, fearing that such demands would open the floodgates, and European museums and institutions would have to turn over all the human remains they’d acquired throughout their colonies. However, the French finally relented in 2002, and as a result, Baartman became a national symbol when thousands attended her centuries-delayed funeral on August 9, 2002–South Africa’s National Women’s Day. She is now buried near the Gamtoos River in the Eastern Cape.

In the wake of Baartman’s return, articles, books, artworks and films have covered her story, including my own work. Nicki Minaj unwittingly stumbles upon her history in the SNL skit, with its hyper-emphasis on “booty.” Let’s not be similarly unwitting: Consider this an opportunity to purposefully recover Sara Baartman’s story for Black History Month. Check out Barbara Chase-Riboud’s fictional account in her novel The Hottentot Venus; a biography by Clifton Crais and Pamela Scully, Sara Baartman and the Hottentot Venus: A Ghost Story and a Biography; and the recently published anthology, Black Venus 2010: They Called Her “Hottentot,” edited by Deborah Willis.  Finally, there is a new French film about Baartman, Venus Noire by Tunisian filmmaker Abdellatif Kechiche, which has yet to be released on this side of the Atlantic.

Whether in jest or in serious contemplation, Baartman continues to haunt us, perhaps because her story has yet to be fully told. This is a difficult task when one is constantly reduced to T&A spectacle, and so many bodies exist (then and now) to perpetuate this legacy.

Photo of Nicki Minaj from Flickr user She So under license from Creative Commons 2.0