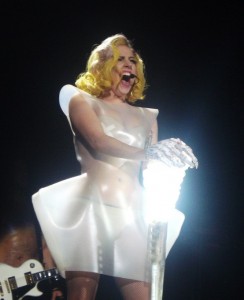 I’ve been looking forward to the music video of Lady Gaga’s much-hyped single “Born This Way” for several weeks, so, when it premiered Sunday on Vevo I really wanted to love it. Unfortunately, “Born This Way” just doesn’t have the twisted, Mad Hatter brilliance of Gaga’s “Bad Romance” video or the movie-pastiche playfulness and queer pleasures of “Telephone” (featuring Beyonce).

What “Born This Way” does share with earlier Gaga videos is an unabashed willingness (nay, insistence) to push the already elastic envelope of music video propriety, a penchant for dancing around in her underwear and a clear, but not completely realized, desire to blur the boundaries between pop rock and video art.

“Born This Way” refers to the idea that homosexuality is the result of nature not nurture, something Gaga emphasizes both through her lyrics (“No matter gay, straight or bi, / Lesbian, transgendered life / I’m on the right track baby / I was born to survive”) and with the neon pink triangle that opens and closes the video. But visually, she seems more interested in metaphors of childbirth and Motherhood (capital “M” intended) than in dwelling on images of queer pride.

The video opens with Gaga herself framed as a primal Mother Goddess (backed by Bernard Herrmann’s score from Alfred Hitchcock’s Vertigo, by the way). “This is the manifesto of Mother Monster,” her voiceover intones, weaving together an origin myth accompanied by visceral and graphic birthing imagery, as pale heads covered in a viscous fluid emerge from between her legs:

Utilizing a Rorschach blotch kind of video effect, “Eternal Mother” Gaga mirrors herself so that her left and right sides merge and split, creating an explicit labial image. What’s fascinating about this bold genital imagery is how it parallels feminist attempts, primarily in the 1970s, to highlight the power of female sexuality through symbolic or literal engagement with female bodies and bodily fluids in art (see Judy Chicago’s The Dinner Party, Chicago and Miriam Schapiro’s Womanhouse, Carolee Schneeman’s Interior Scroll, Kiki Smith’s early work and many others). Equally compelling, at least visually, is Eternal Mother’s second birthing: Gaga delivers a futuristic, black machine gun, a “birth of evil” which “splits [her] in two.”

As bullets rain around Gaga, the music swells and the camera shifts to an aerial view of myriad semi-nude dancers bent on all fours. And then Lady Gaga starts singing–and the fun’s abruptly over. I have so many questions for the primal Mother Monster but the video’s remaining four minutes–featuring gooey severed heads, inexplicably tuxedoed zombies and Gaga’s sequined bikini mud-wrestling troupe of dancers–leave me no outlet for them.

In many ways, I think Lady Gaga is shackled by her pop diva inheritance. While Madonna’s legacy compels pop stars like Gaga to take risks, the risks she clearly wants to take–more existentialist than erotic–don’t mesh well with the relentless and peppy superficiality required of top-40 hits.

“Born This Way” is like the love child of a three-way between Michael Jackson’s “Thriller,” Madonna’s “Vogue” and artist Matthew Barney’s trippy, bodily fluid-filled five-part Cremaster Cycle (a work Gaga also emulates in “Bad Romance”). The video is unequivocally bizarre, but the problem isn’t its strangeness but the blandness of the lyrics. This is awfully ironic considering that “Born This Way” is supposed to be Gaga’s gay pride anthem, but perhaps it’s why “Born This Way” falls short: Where other Gaga videos have exceeded the expectations of their pop-standard text (the lyrics are full of repetition and catchy refrains, but the videos are far more dynamic), in this latest incarnation the most compelling parts of the video seem to have little or nothing to do with the lyrics.

Eternal Mother may not be the only one splitting herself in two.