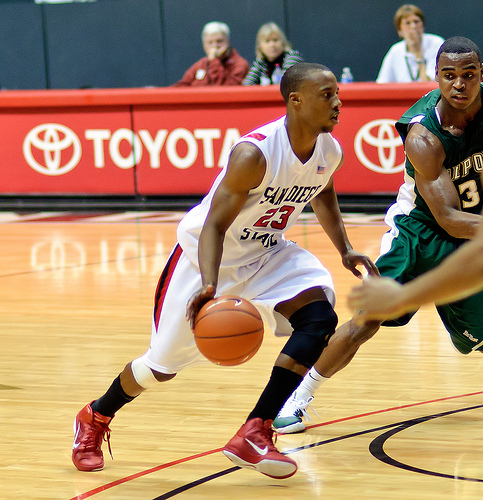 UPDATE: D.J. Gay and San Diego State will bring the power of women’s studies to the Sweet Sixteen! Read on …

March Madness is in full swing, and it is time for the Ms. Blog to fill out our brackets for the NCAA women’s and men’s basketball tournaments. We can’t tell you all our picks, but we can go on record as choosing D.J. Gay as our favorite men’s player.

Gay is a senior point guard for the San Diego State Aztecs, the No. 2 seed in the West region of this year’s tournament. Gay averages 34.6 minutes of play, scoring 10.5 points a game. He finished the year with 146 career three-point field goals and averages 3.2 assists per game. He is a leader, a team player–and a women’s studies major.

In an interview with Sign On San Diego, Gay says:

The first time I say it, that I’m majoring in women’s studies, people don’t believe me. They never believe me … I think I hesitated for about a day and then I was like, ‘Screw it.’ In all the other classes, you learn numbers and [facts] and stuff like that. I felt women’s studies was a class where I learned morals and life lessons.

San Diego State University established their women’s studies program in 1970, staking claim to it being the oldest such program in the U.S. Gay is one of two men majoring in the field at the university. He says,

[Women’s studies] changed my whole way of thinking. It made me realize how ignorant I was to some of the things going on in society.

The San Diego State University Aztecs go head-to-head with No. 15 Northern Colorado Bears on St. Patrick’s Day at 4:40 p.m. ET in Tucson, Ariz. Though we wish all of the teams the best of luck, Gay and the Aztecs have already taken the title at the Ms. Blog.

Preserving Our Legacy: ‘An Important Piece of Feminist History Is at Risk of Being Lost’

Teaching Students to Write Their Rage