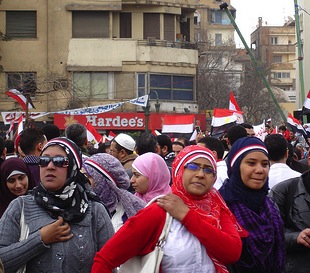 Although Egypt’s popular revolution was inspiring because, as Judy Molland wrote a few weeks ago, women were a “strong, defiant force” in the revolt that toppled the Mubarak regime, some information is now filtering out that makes it clear that women protesters were still subject to some fairly horrible, sexist treatment.

Amnesty International is now condemning the treatment of at least 18 women who were held in military detention after being arrested during a protest on March 9 (a month after Mubarak stepped down).  The women told Amnesty International that they were beaten, given electric shocks, and subjected to strip searches while being photographed.  They were then forced to submit to “virginity tests” and told that if they were “found not to be virgins,” they could be charged with prostitution.

“The army officers tried to further humiliate the women,” an Amnesty International report explained, “by allowing men to watch and photograph what was happening, with the implicit threat that the women could be at further risk of harm if the photographs were made public.”

The fact that protesters were being tortured is bad enough, but the way that this torture was specifically gendered is particularly horrifying.  This seems to have been a pattern during the protests in Egypt, despite women’s courage in participating openly in the revolt.  CBS reporter Lara Logan was brutally assaulted during the protests, and many other womenhave reported sexual harassment and verbal abuse.

Egyptian feminist Nawal El Saadawi reacted with outrage, saying that “[Egyptian women] are furious. We participated in every part of the revolution, and then as soon as it ended we were completely isolated.”

And if these allegations are true, women are right to be angry.  They were active and integral participants in the struggle against an oppressive regime–to be reduced, once again, to second-class citizens is more than these protesters will stand for.

Sign here to protest the treatment of these women:
[iframe http://dev-msmag.pantheonsite.io_care2_egyptmilitary.asp 240]