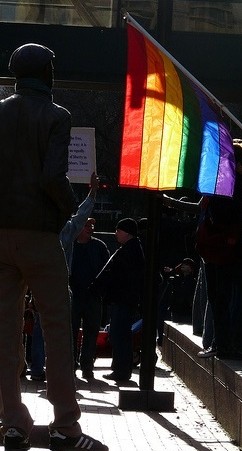 Yesterday, more than seven months after same-sex marriage ban Proposition 8 was ruled unconstitutional, the 9th Circuit Court of Appeals decided to prolong the wait for California gay couples who want to exercise their constitutional right to marry.

After a federal judge overturned Prop 8 in August, the 9th Circuit stopped lesbian and gay couples from getting married by halting enforcement of the ruling while it was appealed. However–in an implicit acknowledgment that time is of the essence when it comes to people’s life plans–the appeal was put on an accelerated schedule, and the case was heard in December. Couples wanting to marry had high hopes for a speedy conclusion. Unfortunately, the appeals process stalled last month when the 9th Circuit asked for clarification from the California Supreme Court on a procedural issue–which won’t happen until September at the earliest. And the 9th Circuit yesterday denied a request to allow couples to marry in the interim.

Time matters in this case. One of the central points raised by the opponents of the marriage ban has been the irreparable harm inflicted on same-sex couples who wish to marry. In a Courage Campaign video that went viral earlier this year, Derence Kernek and Ed Watson recount their 40-year relationship, Ed’s diagnosis with Alzheimer’s last summer, and their desire to marry before the the disease can deprive them of a shared memory:

Derence and Ed’s story reminds us of two things the 9th Circuit should have taken into account in reaching their decision: Life is uncertain and love is precious. Making lesbians and gays wait indefinitely to marry is doubly cruel since the evidence of the trial so strongly concluded that marriage is a fundamental right that is constitutionally protected for all citizens.

A statement filed by the legal team that has been working to overturn Prop 8 emphasizes the ongoing harm caused to lesbians and gays by the the stigma of second-class citizenship.

Proposition 8—and the stay that allows it to remain in force—is causing great damage. It is not merely deferring wedding dates, as Proponents suggest. For those near the end of life, it is denying the right to marry outright. But beyond the damage done to loving couples’ wishes to marry, Proposition 8 carries an unmistakable message—transmitted and enforced by the State and tolerated by this Court—that gay men and lesbians are members of a class of persons unworthy of the fundamental right of marriage and the “protection of equal laws.”

Couples who ought to be dancing at wedding receptions and hearing congratulations from family and friends must instead listen to the ticking of the clock and the voices of those who tell them they’re not good enough when our country clearly stands behind equal rights for all. Time is likely to favor marriage equality, as the unconstitutionality of marriage bans becomes widely acknowledged. In the meantime, though, it is our democracy that suffers harm, along with the same-sex couples who must continue to wait for the full recognition of their rights.