On Domestic Workers' Day, A Call to Action - Ms. Magazine
Skip to content 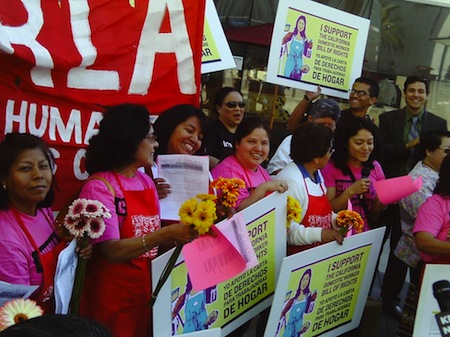 Outside of the busy Vermont Metro station in Los Angeles today, dozens of domestic workers and supporters rallied to call for the passage of the California Domestic Worker Bill of Rights.

“Behind many successful households there is a strong domestic worker,” said Altagracia Garcia to cheers. She and others spoke out for domestic workers’ legal rights and protections today–National Domestic Workers’ Day–and they made a strong case.

Introduced by state assembly member Tom Ammiano in February, the bill would grant the basic rights afforded most other workers–paid overtime, workers’ compensation–to domestic workers. Such workers, who are overwhelmingly immigrant women of color, have been consistently left out of labor laws, as their non-traditional positions don’t fit standard legislation.

On July 1, 2010 New York became the first state to ever enact such a bill, which guarantees paid time off, legal protection from discrimination and harassment and a minimum one day of rest per week, among other victories.

The passage of the California bill would also ensure that live-in domestic workers would have the right to sleep at least five hours each night and have access to employers’ kitchens to cook their own food. Advocates say that because those rights are specific to live-in caregivers, they must be enshrined in domestic worker-specific law.

Lolita Andrada Lledo, associate director of the Pilipino Workers Center in Los Angeles, told Ms. that the ability to cook their own food is essential for caregivers–rather than being limited to what food that their elderly and ill patients are able to eat. “We want them to respect our culture, where we come from,” she says.

On the right to sleep, Lledo says in-home workers are often denied sleep entirely, especially when caring for stroke victims and elders with dementia or Alzheimer’s who have round-the-clock needs. 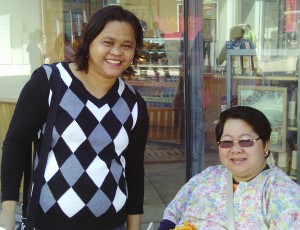 “Stroke victims sleep, but you need to turn them over every two hours,” she says. “How can you expect someone to survive [without sleep]? The patient will survive, but the one who’s taking care will not be able to survive,”

She told Ms. that when domestic workers have asked employers to hire a second caregiver (so each would work 12 hours, giving the other a chance to rest), employers have claimed they can’t afford a second employee.

“If you don’t have money to pay you better find other ways,” she says. “It [shouldn’t be] at our expense.”

Other speakers at the rally stressed the need to pass this bill to ensure domestic workers have legal recourse for harassment and violence in the workplace.

A 20-year veteran caregiver from Mexico spoke at the rally and said she was verbally and physically abused at her first job as a domestic worker. She said her employer’s son hurled insults at her in English (which she came to understand as she learned the language) and frequently hit her with a wet towel or a golf club. Finally, after an argument with his own mother, a restraining order was issued against him. She is now retired and organizing with CHIRLA, the Coalition for Humane Immigrant Rights of Los Angeles, to ensure future generations of caregivers have basic human rights and legal protections.

To show your support for caregivers and the California Domestic Worker Bill of Rights, send a letter to Misa Yokoi-Shelton, legislative aide to assembly member Ammiano, at Misa.Yokoi-Shelton@asm.ca.gov by April 6th. For more information check out the National Domestic Workers’ Alliance and CHIRLA’s website.