It was the 1980s. I was an oddball. I loved Tina Turner, Pat Benatar, Cyndi Lauper, Eurythmics, U2 and the Rolling Stones. I was dreaming of becoming a rock star. My father wanted me to do the dishes.

If you’d ask me back then whether I was a feminist, I would probably tell you to stop labeling me and flipped you the bird (up yours was my favorite retort, even though I was still learning English). Besides, at that age, I hadn’t given the word “feminist” much thought.

We had migrated from Haiti in 1978. The ’80s was a tough time to be Haitian in the U.S. It didn’t matter how or why we came here, we were considered either boat people or carriers of AIDS. The CDC branded us as one of the four H’s–along with hemophiliacs, homosexuals and heroin users. Haitian was a word amended by qualifiers such as dirty, stinking and the like. I had a thick accent, a dead give-away. I was tormented and bullied for years, so I was always on the defensive, even though in some ways I was moving away from the Haiti I knew.

Besides the trouble at school, on the home front my parents knew they were on losing ground. Migration in many ways was easier on kids, who adapted in spite of the cruelty of peers. I cannot count the number of times I heard my parents say that this country ruined their children. I grew up in Haiti wanting to be a nun; not surprising, as I attended Anne-Marie Javouhey, a French missionary Catholic school. In the U.S., though, I dreamt of wielding a microphone on the stage.

In my little wars at home, I took on classed and church strictures for girls when I fought my mother’s insistence that I wear a dress. “Why? Why why?” I kept asking. This became a serious fight. I remember saying “If God has seen me naked, why can’t I wear pants?” Click!

I was going off script. Good Haitian girls, I was taught growing up, left home only when they got married. If they went to college, they did not choose one in the city of sin (New York). But that was precisely where I set my sights. Where else can you break into the singing business? Of course I was naïve.

Living in New York City, it became more clear to me that way too many black women wanted to be singers. I started to understand that white boys in bands–Bono, Mick–were the only ones who could do whatever they want. The singers I adored, mostly white women, were fighting sexism. Tina Turner was the only black rock ‘n’ roll chick, and she was fighting racism. Click! Where the hell did that leave me? Dark-skinned girl. Click! Short legs. Double click! Braniac. Triple click! And Haitian. Quadruple click!

Then there was the major fight over the dishes. My family moved from New Jersey to Maryland. I refused to go. It was just Father and I in the apartment for a couple of months. I’d come back from the city to piles of dishes in the sink. They began to get crusty because I only washed the ones I used. We had a confrontation. Father said I had to do the dishes. Since I wasn’t averse to other chores, I asked why. “You’re a girl,” he said. “So?” I said back. “Your mother does the dishes,” he said. “I am not your wife,” I replied. “We don’t have a contract. And even she shouldn’t have to do your dishes.”

This, of course, made us enemies for weeks.

Such answers were typical of me. They made me very un-Haitian and eventually marked me as the one who can’t keep her mouth shut and doesn’t care about the consequences of talking back. Click! Silence is a structure of power. Click!

Years later, in “Papa, Patriarchy and Power“, I would write about this, realizing that all these clicks and culture clashes are at the heart of why I proudly call myself a feminist and not a womanist today. Oh, and that is a whole other story.

Photo of Tina Turner by Wolfiewolf, under license from Creative Commons 2.0 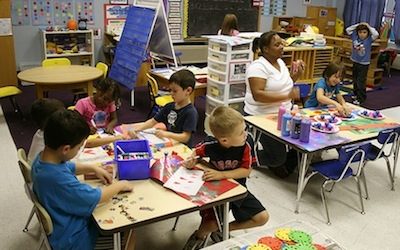 Click! Everything I Needed To Know I Learned in Kindergarten